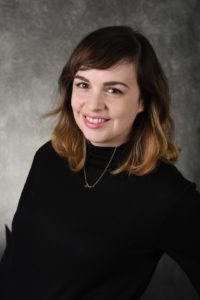 Hello, I'm Caitlin Duffy, and I'm a doctoral candidate in English literature at Stony Brook University. My scholarly interests include 19th century American Gothic literature, American horror cinema. I am particularly interested in exploring the ways that 19th C American gothic literature works to define liberalism and contemporary American horror films react to/define/challenge conceptions of neoliberalism.  My work has been published in The Journal of Dracula Studies, and will appear in a forthcoming issue of Poe Studies, a volume on 1980’s horror films, and a collection of essays on Trump in fiction.

Prior to joining the doctoral program at Stony Brook, I worked as a high school teacher within the NYC public school system. This invaluable experience has led me to develop a passionate and continuing interest in pedagogy.

I recently used my blog as a space for my comprehensive exam notes. My three exam lists included: 19th century American literature, 19th century British literature, and the Anglo-American neoliberal horror film (mainly a theory list). I'm currently working on my dissertation prospectus and plan to return to my blog soon as a means to work through my dissertation in a public setting and in a more accessible language.

This site is part of Humanities Commons. Explore other sites on this network or register to build your own.
Terms of ServicePrivacy PolicyGuidelines for Participation
Skip to toolbar