Language not only represents the means and methods by which humans communicate with one another, but it also conveys the lens through which all human beings must 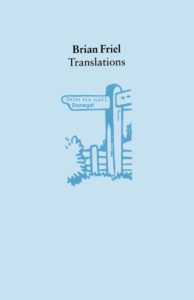 examine and understand the world around them. I find this to be a fascinating concept, as it not only showcases the power of words, but it also highlights language’s central role in culture and knowledge production. In Brian Friel’s play, Translations, a British officer named Yolland laments that he will never be able to truly “speak the language of the tribe” no matter whether he learns the words and grammatical rules of Gaelic. Even by learning another language, you learn it through the lens and particular context of your own upbringing and culture, it is something that you can never escape. This is a fact that scholars can lament over, as Yolland does, or it can be something that we acknowledge and work with or around. In my opinion, the choice of lamentation is a fruitless one as it could prevent people from learning or discussing different cultures and languages. Rather, it is vital that scholars accept and acknowledge their own unique cultural context as they discuss the traditions and beliefs of cultures foreign from their own.

The concept of language as a means of understanding has appeared in some of the articles I’ve read in my Global Rhetorics class. In his article on Korean rhetoric, Jon Sung-Gi notes that translations can never be done perfectly because of the “linguistic and cultural implications” tied to any word or phrase, including that of “translation” (315). Sung-Gi later states that “language is not a mere instrument, but is the environment we live in” (321). In their respective articles, both George Q. Xu and C. Jan Swearingen & LuMing Mao discuss the inherent difficulty even in translating the word “rhetoric” into Chinese (116, W34). Finally, Akira Miyahara describes the recurring problem of Western scholars using Western theories, contexts, and frameworks to understand Asian rhetoric. Miyahara says that this method is destined to fail from the start simply because “these observations and interpretations are necessarily biased and bound by their individual belief systems that are shaped and influenced by their institutional, psychological, social, and religious orientations” (2). Foregrounding these problems is required in order to begin to understand the various challenges scholars must seriously contend with when working within global rhetoric. Perhaps the best thing we can do is both acknowledge our own contexts and biases and do our best to understand the cultural and political contexts in which the rhetorical traditions we study develop and exist. Context is important on both sides of this scholarly equation.

I was also interested in the ancient Chinese (mainly Confucian) suspicion of eloquent language. Swearingen & Mao work to connect this suspicion with the desire to support and educate the collective through shared knowledge. This reading of suspicion adds a new contextual layer to understanding the lack of respect for flowery language in ancient China.  According to this article, “plain, sincere discourse” is the best way to “allow its audience to comprehend the ideas it represents” (35-36). I think there is an easy way to connect this to the current push in the Digital Humanities (and beyond) for accessibility. If the purpose of our scholarly work is to provide the public with knowledge and education, why not share our work? Why not make it easily readable and interpretable rather than fill our work with erudite, difficult language?

Sung-Gi, Jon. “Towards a Rhetoric of Communication, with Special Reference to the History of Korean Rhetoric.” Rhetorica: A Journal of the History of Rhetoric. 28.3, 2010. pp. 313-329.

Xu, George Q. “The Use of Eloquence: The Confucian Perspective.”