Invitational and Zen and Nyaya, Oh My!

Unlike Dorothy and her friends, rhetoric scholars should not be afraid of exploring diverse methods!

This semester, I’m taking a course focused on non-Western rhetorical practices. Reading about these rhetorical traditions has caused me to reflect upon my own teaching philosophy, as well as on the far-reaching impact that pedagogical practice can have on students. Three articles in particular come to mind when I consider the push for a more inclusive and multifarious approach to teaching rhetoric: Sonja K. Foss and Cindy L. Griffin’s “Beyond Persuasion: A Proposal for An Invitational Rhetoric,” Cosmin Constantin Baias’s “Non-Argumentative Rhetoric: Aspects of Zen Rhetoric,” and Shyam Sharma’s “Beyond Colonial Hegemonies: Writing Scholarship and Pedagogy with Nyayasutra.” Rather than only teaching the Western mode of rhetoric, which focuses on domination, persuasion, and argument, educators can (and should) help students to practice other methods, including Foss & Griffin’s invitational rhetoric, Baias’s Zen rhetoric, and Sharma’s use of Nyaya rhetoric. Overall, I believe that, if answered, this call for a more diverse rhetorical education would lead to a more rigorous writing curriculum. Students would need to be able to diagnose the rhetorical situation and prescribe the correct rhetorical mode to fit its needs. When writing within the invitational, zen, and Nyaya forms, students would also need to view the issue they are discussing from multiple perspectives, a task which is very difficult to accomplish yet is also intellectually and socially rewarding.

I enjoyed reading through Foss & Griffin’s proposal for invitational rhetoric not only because I felt that it is a great rhetorical method to introduce to students but also because the second part of invitational rhetoric, the “creation of external conditions” (7), can be a helpful model for teachers. When I think of my favorite teachers, they all successfully created an environment of safety, value, and freedom (Foss and Griffin 10).  Within such a welcoming atmosphere, students feel comfortable sharing, dissecting, and adding to their own and others’ ideas and interests. The classroom becomes a collaborative laboratory where students can bring forward the concepts they find interesting while the teacher acts like more of a guide or an assistant rather than a authoritative figure. This engages and empowers the students by providing them with more ownership over their own learning. 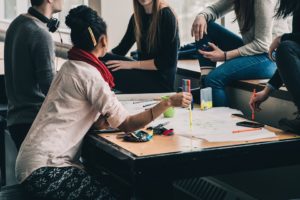 Zen rhetoric, the mind of the beginner is more important and desirous than that of the master (40). I think this is a valuable perspective to maintain as an educator. It is easy to fall into the trap of viewing students’ beliefs, skill-sets, and ideas as subpar or in need of improvement and change, however, it is far more helpful for teachers to adopt the Zen perspective of the student mind. Education should not be the business of molding students into miniature versions of the teacher, but rather it should be focused on helping students better develop their own thoughts. By respecting the mind of the beginner, teachers can become more able to assist students in achieving the “multitude of possibilities” available to them (Baias 40).

Finally, I was really inspired by Sharma’s call for academics to actually use diverse methods of rhetoric in their teaching practices rather than just theoretically write about them.  Once these methods are actively used, educators can then share their experiences and advice through articles, blog-posts, or other media. It is only through the sharing of pedagogical methods for educator audiences that diverse rhetorics can be introduced into the pedagogical “mainstream” and to students. After reading this article, I decided to craft my mid-term and final paper for the class as a pedagogically-focused piece. I truly believe in the importance of writing for educators to help bring these non-Western rhetorical traditions into more classrooms than just my own. Sharma also added to the conversation of Foss and Griffin and Baias by acknowledging the insidious nature of traditional (Western) rhetoric. As someone within the Western academy, it is difficult to be aware that this single method of rhetoric is just one of many, or that its prevalence in Western education is a political move (Sharma 8).

Diverse rhetorical practices can prove helpful to writing teachers across primary, secondary, and college levels. However, if rhetoric scholars don’t work to share these ideas in meaningful and practical ways, methods like invitational, zen, and Nyaya rhetorics will remain as strangers to the American classroom.  I hope that this blogpost provided a few  helpful nuggets of rhetorical methods that are easy to digest and use immediately in your own teaching (and writing) practices.

Invitational and Zen and Nyaya, Oh My! by Caitlin Duffy is licensed under a Creative Commons Attribution-ShareAlike 4.0 International License.