Creators of horror fiction have always been interested in finding and using new methods to create the sense of unrelenting immediacy for their readers and/or viewers. As one of the primary goals of gothic and horror texts 1 is to scare its audience, immersion is certainly key. The imaginative world within the horror text must be a world close enough to the one inhabited by the audience so that the two can bleed into one another. Early examples of methods used by horror writers to create immediacy include a note of

authenticity prior to  the first chapter which claims that everything described within the story is true 2 or a warning at the start of the film that it depicts a real event 3. When the gothic mode was transported from Europe to the United States, Charles Brockden Brown (among others) realized that the genre needed to be re-worked to fit the “new” American context and urged other American writers to include haunted woods within their gothic tales and novels rather than haunted castles and dungeons.

Rather than incorporating the gothic into a new region, the horror genre today is reforming itself to fit within the digital era 4. The recent film Unfriended (2014) takes place almost entirely on a computer monitor and featured a digital ghost. More importantly to this post, the traditional ghost story has lately been remediated into an entirely digital product. Rather than experiencing horror through the page or screen, fans can now find these narratives on spaces like Creepy Pasta or, perhaps more surprisingly, Twitter. 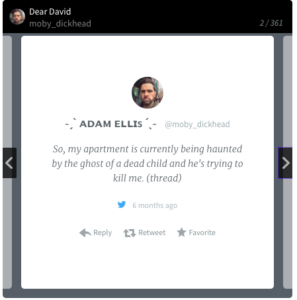 eerie child ghost haunting his NYC apartment through text, photos, and short videos. Bolter and Grusin note that hypermedia “strives for immediacy” despite the fact that “digital technologies of immediacy always end up being remediations” 6. Ellis’s ghost story certainly borrows a number of conventions from the traditional ghost story, including the ghost seeking vengeance, animals being aware of the spirit’s presence, and, most recently, possession. However, all of these recycled plot-lines are remediated and improved upon through the use of digital technology and the hypermediacy created by Ellis’s multimodal project.

If the goal of the ghost story is to infect his Twitter followers with fear, it seems he’s been successful so far. The affordances of Twitter allow followers to respond to each tweet posted by Ellis, and for Ellis to respond to the recommendations or observations made by these readers. Therefore, interaction occurs, causing a “collapse of…distinctions” between the traditional roles of author and reader 7.  A seemingly endless stream of discussion will follow each of his threads (he posts a burst of updates through a single thread at random). Responses vary from those trying to prove that the story is fake, concerned readers instructing him to get an exorcist 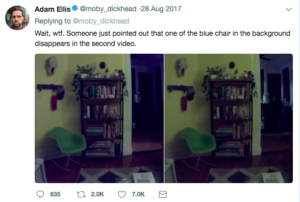 or to move out of his apartment, to fans who “discover” clues hidden in the various videos and photos he posts. Sometimes, Ellis will respond to his followers’ posts, making them an integral part of the creation process. Although it’s difficult to make the media of Twitter “disappear” to create a fully immersive experience of this ghost story, the familiarity of Twitter allows the boundaries of reality to be pushed. 8 Updates of Ellis’s ghost story appears on his followers’ streams, alongside tweets published by their close friends, celebrities, and (ahem) politicians. By allowing the story to exist within this digital realm, it becomes a part of everyday reality. 9

The familiar plot-point of a ghost possessing its victim is all too common in horror fiction. However, by placing his narrative on Twitter, the concept of possession takes on a new meaning. In his most recent update, Ellis noted that he’s been loosing track of time, that he’s been hearing voices and that he’s just felt “off” lately. He also shared a picture that was also posted on his Instagram story, but he doesn’t remember posting it. The photo shows him with a friend, but part of his face is replaced with what appears to be David’s monstrous visage. Later that day, a video of Ellis’s cat nervously reacting to something was posted to his Twitter, but unlike all of his other updates, no thread or commentary followed. Followers are currently expressing concern and wondering if Ellis (and/or his social media accounts) have become possessed by David’s ghost. 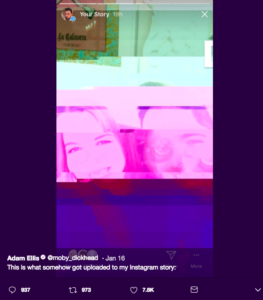 While this media has proven to be a thrilling platform for supporting a ghost story, Ellis’s use of Twitter and the reactions he’s received from his followers raise a number of interesting questions. First, can social media be haunted or possessed? How can this inform readings of Eyman’s “digital self” and “distributed identities?” 10 In ghost stories presented on old media, possession occurs in the human body. It seems that Ellis’s digital self is possessed. Is this the same? If we equate machines with bodies, do we loose what it means to be human?

Secondly, I wonder how some of the reactions to Ellis’s story can be read in terms of surveillance studies. One common reaction, especially when Ellis posts photos or videos of the ghost, is for followers to express fear at looking at the images because they believe David may be able to haunt them through the Internet. What does this tell us about the common perception of digital privacy and surveillance?

I also wonder what this says about the immediacy of Ellis’s project. Clearly, none of Ellis’s followers have forgotten that this narrative is posted on Twitter, yet it seems like the story is more immersive because of its obvious mediation. 11 When presented on old media, the ability for a film or story to create horror often depends on timing 12. However, “Dear David” has been slowly presented across the span of six months (and is not yet complete). Is time something we need to consider when looking at remediation? Or does the digital lend itself more to the slow, the quick, or to neither? My question overall is, what makes this story so immediate despite its glaringly obvious mediation?

Finally, I’ve been using “Dear David” as an example of remediation, but is it really? Ellis is certainly moving the genre of the ghost story from one media to another, but he is not remediating a single text or narrative. Does remediating an entire genre count?