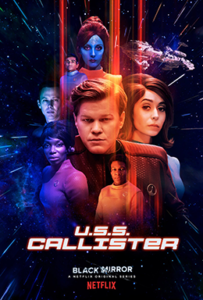 In an effort to physicalize Katherine N. Hayles’s abstracted theories regarding the posthuman and virtuality, I’d like to closely examine one of the episodes from the most recent season of Black Mirror, “U.S.S. Callister” against Hayles’s How We Became Posthuman: Virtual Bodies in Cybernetics, Literature, and Infomatics. Before reading any further, please be aware that there will be spoilers! If you haven’t yet watched this episode, please do yourself a favor, load up Netflix and enjoy this dark send-up of toxic nerd culture. Once you’re done, please come back here.

Ok. I assume that if you’ve made it this far, you’ve either watched “U.S.S. Callister” or you 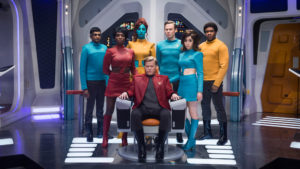 don’t really care about it being spoiled (you should still watch it later). Either way, welcome aboard.

“U.S.S. Callister” is an episode of Black Mirror, co-written by creator Charlie Brooker and William Bridges, and directed by Toby Haynes. It features Robert Daly (Jesse Plemons), a quietly angry “nice guy” coder and co-creator of a popular virtual reality game known as Infinity. In order to seek revenge on all who “wrong” him in real life, Daly uploads their consciousnesses into his own custom build of the game, “U.S.S. Callister.”1 His custom build is designed to simulate his favorite television series, Star Fleet where he can play tyrannical captain to the unfortunate consciousnesses trapped within the system. 2 Unlike the other members of his crew who are nothing more than pure information uploaded into the game, Daly must plug into the game through electrodes attached to his cranium.

The first chapter of Hayles’s How we Became Posthuman opens with Hayles sharing that the idea for this book began after she read Hans Moravec’s Mind Children. According to Hayles, reading about the potential future ability to “download human consciousness into a computer” was “a roboticist’s dream that struck me as a nightmare.” 3 Moving from this dream/nightmare, Hayles explains that her goal in writing this book is to prevent the repeated erasure of the body in discussions about cybernetics. 4 In working towards this goal, Hayles covers a number of concepts, erasures, and introduces multiple key concepts. For the purposes of this blog post, I will focus on remediation, the separation of information from materiality, and flickering signifiers.

Remediation and the Necessity of a Medium

Hayles insists throughout chapters one and two of How we Became Posthuman that “abstracting information from a material base is an imaginary act.” 5 In other words, information requires a medium in order for the information to exist. At the start of chapter one, Hayles asks, “Even assuming such a separation (mind from body) was possible, how could anyone think that consciousness in an entirely different medium would remain unchanged, as if it had no connection with embodiment?” 6 Pointing to Star Trek’s “Beam me up, Scotty,” Hayles posits that belief in the possibility of information to circulate unchanged across different mediums is popularly accepted within

our current culture. A similar version of the Star Trek dematerializing/rematerializing technology discussed by Hayles appears in “U.S.S. Callister,” however, it takes on a different form because the characters aboard the USS Callister are themselves informational code rather than material bodies. Therefore, when they “dematerialize,” what is actually happening is a brief disappearance of the character’s signifier before it reappears elsewhere in the program. The remediation of this technology results in a more horrifying tone: In Star Trek, teleportation is familiar, but for the recently uploaded consciousness of Nanette Cole, her dematerialization is both unfamiliar and a reminder that she is no longer an embodied creature.

The USS Callister program is itself a remediation of Daly’s favorite television show, Star Fleet, which is a remediation of Star Trek. We can see the obvious nod to Star Trek in the show’s brightly lit opening scenes and costumes. Unlike the rest of the episode, this opening bit is filmed in fullscreen rather than widescreen and takes on a retro-future vibe. 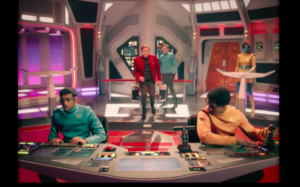 The ship is also a remediation of Daly’s work environment. As noted in Cynthia Davidson’s slideshow on avatars and cyborgs, self-identity is often played with online. In virtual simulations, the player can create a self that is better able to connect with others, has more power, etc. In his real life, working at Callister, Inc., Daly may co-own the company, but he is helplessly unable to talk to women, manage his employees or demand respect from the other owner. Aboard the USS Callister, he is remediated into the captain of the ship,  feared by the crew members, all of whom are the uploaded consciousnesses of his coworkers and employees.

Hayles was right to question whether information can remain unchanged once it has been remediated. The uploaded consciousnesses of Daly’s employees and co-owner are separated from their material body and are now made of nothing more than information. Their virtual signifiers look almost exactly like their real bodies (they call themselves “digital clones” or “copies”), but there are some major changes to their virtual bodies (avatars?) which I will discuss later. Through their remediation into pure code, these consciousnesses undergo personality changes. Co-owner of Callister, Inc., Walton, is now a terrified subordinate of Daly, while Cole transforms from the nice fan-girl/victim of a toxic work environment into a rebel hacker able to lead the others in a plot against Daly.

Information Vs. Materiality and Flickering Signifiers

Embodiment and disembodiment is present throughout “U.S.S. Callister.” In the “real world” scenes, information is constantly flowing through and connecting with the material world. The soft glow of digital lights, ear pieces, electronic sounds, and ever-present monitors are visible in almost every shot. Most importantly, perhaps, human DNA is also present within the “real” world. According to the logic of “U.S.S. Callister,” Daly is able to upload the consciousnesses of others in order to create digital clones using their DNA. While uploading Cole into his program, we see a collection of 0s and 1s as well as

GATTACA strands alongside each other on his computer monitor. Hayles classifies DNA as a form of information rather than embodiment, however, DNA strands are the building blocks/code which creates the human body. Is this not another form of embodiment? In “U.S.S. Callister,” DNA fits Hayles’s reading of DNA as information, however, it also claims that consciousness is embedded within DNA strands. This pushes against Hayles’s concept that consciousness is also directly tied to embodiment. The media which houses information directly informs its expression.

In Daly’s program, however, the information simply allows him to house multiple consciousnesses within his computer program. The DNA (maybe) has nothing to do with the avatars connected to each consciousness, as Daly manipulates their signifiers at will. For example, in order to adhere to Star Fleet’s “PG universe,” all avatars within the program have no genitals or anuses. When Daly wants to punish the uploaded consciousnesses for not playing along with his game, he transforms their signifier into something monstrous. For not going to her “station” on the ship, Cole briefly looses her

face. Most are simply “monsterfied” and are turned into a variety of space beasts. Even when they are transformed into these bizarre avatars, their consciousness remains unchanged. When the team comes across Jeanette “from marketing,” she is in the form of a monster, yet they are able to sit

and chat with her about how she’s “been doing” and “how “great” she looks. This is part of the dreadfulness of the punishment: once assigned to your avatar, you remain eternally represented as such until Daly chooses to change it. Additionally, the uploaded consciousnesses are still able to feel, sense, and experience a wide assortment of pain despite not having a material body. Hayles’s concept of “flickering signifiers,” or signifiers that, due to their immateriality and digital existence, are constantly prone to sudden changes and dispersions 7 may be helpful to consider here. Just as digital text can be lost (and therefore non-existant), the digital clones exist only through their avatars within the game. These signifiers are mutated rather than castrated, as are Lacan’s “floating signifiers.”  The signified consciousnesses in “U.S.S. Callister” are both castrated and are prone to mutation. As of right now, I’m not sure what to make of this, but I’d love to hear your thoughts.

Overall, “U.S.S. Callister” seems to make an argument against the myth of complete disembodiment similar to that presented by Hayles. Rather than viewing disembodiment as a dream of eternal life and endless freedom, it becomes a nightmare of digital enslavement. Daly constantly threatens the digital clones with the punishment of eternal life, and many of them beg for death. With this in mind, the tone of the episode’s conclusion becomes clouded. (Clone) Cole is able to take control of the ship with the help of the other digital clones while Daly is distracted. They drive the ship into the firewall of an update patch (depicted as a wormhole within the game). They assume that the firewall will delete everything attached to the rogue game, including themselves. Cole notes that they would be deleted, and therefore “dead,” but “we’d be free.” This contrasts heavily with the “dream” of the disembodiment myth as described by Hayles, which claims that virtuality will allow for greater freedom to explore new spaces and live eternal life. Once the digital clones drive through the wormhole, however, they find themselves still sentient, 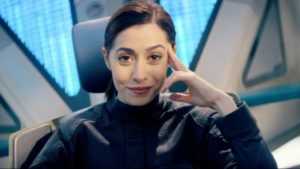 existing in “the cloud.” Despite the fact that they are still trapped within a Star Trek – esque digital universe (although it now presents itself as more like The Next Generation rather than the original series) for eternity, the crew of clones are all smiles. Even Cole seems invigorated by the “freedom” they have to explore the digital universe forever. While the tone of the ending of “U.S.S. Callister” feels happy and triumphant, perhaps it really isn’t. I suspect that this is yet another disturbing ending to an episode of Black Mirror, however, as Hayles argues, our cultural belief in virtuality and disembodiment allows us to view this as a happy ending.

Anyway… sorry this post was so long! There is SO MUCH going on in this episode, but I didn’t realize that until I started writing… now that I think about it, there is so much more that I can say about “U.S.S. Callister” and Hayles, but I’ll stop my post here.

1. How do you reading the ending of “U.S.S. Callister”? Is this another dystopia of Black Mirror or does it offer a more utopian alternative to Hayles’s reading?

2. Can we view this episode as subversive? Does it provide viewers with an alternative to virtual disembodiment?

3. As I stated earlier, the flickering signifiers of the digital clones are both castrated and mutated by Daly throughout the episode. What can we make of this in relation to Hayles’s reading off mutation and castration? I feel like there is something to be said about this, but I haven’t been able to piece it together for myself yet. If I come up with something over the next few days, I’ll update my ideas here.

4. Are the signifiers of the digital clones “avatars” or something else? The clones’ signifiers are completely under the control of Daly, so I’m hesitant to call them avatars.

5.What’s up with feminism constantly being attached to these sorts of discussions of virtual disembodiment? Many critics have connected “U.S.S. Callister” to toxic masculinity in nerd culture and the workplace, as well as to the recent #timesup movement. By the end of the episode, we see a female hacker (who even in the digital world has to prove her worth and capabilities to her male counterparts) become captain of the ship.