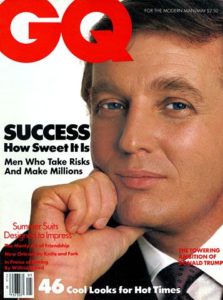 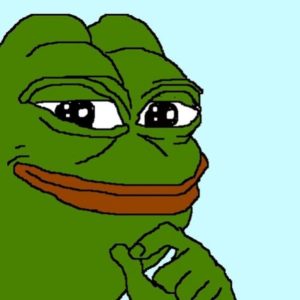 When this semester began, I noticed (with great delight) an article about “meme magic” listed on my Digital Rhetoric course’s syllabus. Since last Spring, Bret Easton Ellis’s controversial 1991 novel American Psycho (and, to a slightly lesser extent, the film of the same name) has repeatedly found its way into my research. My latest American Psycho project includes a presentation I’m working on to share at the upcoming NeMLA Conference as part of the “Trump Fiction” panel. I plan to argue that reexamining American Psycho is essential to understanding Trump’s fatherly appeal to two generations of worshippers and its consequences.  Just as the yuppies of 1980’s New York City admired Trump as the paternal ideal 1, trolling white-nationalists like Milo Yiannopoulos continue to view Trump as “daddy.” After reading through this week’s articles, I’ve found that meme magic, as well as the culture surrounding participatory sites (especially 4chan), may be necessary additions to my conference paper. I’m happy to be able to work out some of the connections I’ve found and the concepts I’m toying with here before adding them to my larger work.

Meme Magic and the Cult of Pepe

In his article “Trump’s Occult Online Supporters Believe ‘Meme Magic’ Got Him Elected,” Paul Spencer briefly outlines a growing belief in the power of memes featuring Pepe the Frog.  Basically, members of the alt-right “plastered” images of Pepe all over the Internet in order to help get Trump elected. Sounds unbelievable? Well, internet culture tends to lend itself to the weird and bizarre.  As Spencer points out, the belief in an image 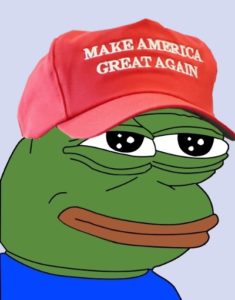 as a powerful proxy is nothing new: the idea lies at the heart of chaos magic, an occult tradition which largely developed in the ’70s and ’80s. One of the major practices of chaos magic includes the creation of magic sigils. These sigils allow chaos magicians to focus their will and push the universe to turn their desires into reality. When many practitioners focus on a single sigil it is known as a ‘hypersigil,’ and is considered ultra-powerful as it contains the desires and willpower of multiple individuals rather than just one 2.

Pepe is believed to be the hypersigil of 4channers, some of whom may not identify as ‘alt-right,’ but most of whom supported the election of Trump.  4chan is generally characterized by its adherence to anarchic transgressions of social norms and its mockery of political correctness. Due to the fact that, according to Ryan M. Milner, Internet identities are largely assumed to be white and male, 4chan’s political incorrectness tended to take the form of  jokes and threats aimed at racial minorities and women.  As many 4chan members began to believe that Donald Trump was the president who best represented their love of chaos and social transgression, Pepe, for whatever “randumb” reason, was used as the digital hypersigil they invested with their desires for a Trump victory. Following a trajectory similar to many other memes born on 4chan, Pepe became mainstream and eventually e a ubiquitous presence online. Soon, even presidential candidate Hillary Clinton recognized the cartoon frog on her official page, citing him as a dangerous symbol of the alt-right; Donald Trump 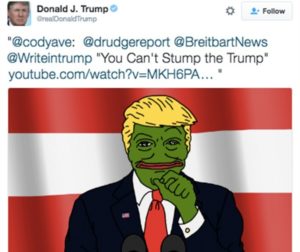 shared an image of Pepe dressed as the candidate to his numerous Twitter followers.  According to chaos magic, all of this added to the potency of Pepe’s image.

At the end of the article, Spencer quotes Théodore Ferréol, an occult researcher who describes Trump as both the new president and “the new Slender Man.” This comparison seems perfect. The figure of Slender Man could easily be described as another hypersigil: he gained greater potency as his story and image were shared, circulated, remixed, and rewritten across the Internet. Eventually, the hypersigil of Slender Man led to (or if you’re a believer, created) devastating results in the real world. A great fictional example of a powerful hypersigil can be found in the “#thinman” episode of Supernatural (which is based on Slender Man).

Spencer also describes the common practice of the 4chan community in which users predict what sort of randomly-generated number their comment or post will receive by posting the word “dubs” or “trips” into the comment. During the rise of Pepe, 4channers began to notice that nearly all of their posts and comments featuring Trump and/or Pepe would receive numbers ending in double digits, or “dubs.” According to Spencer, this odd occurrence was interpreted by members of the community as a sign that “the internet was saying yes, meme magic exists.”

Another odd occurrence which Spencer does not fully explain revolved around a second example of common practice on 4chan. “kek” translated to “lol” on 4chan (and World of Warcraft). 3  During Pepe’s rise, a 4channer noticed that Kek is also the name of an Egyptian deity represented by a frog-headed human and connected to the tenets of chaos. 4  Since then, 4channers and members of the alt-right have (ironically) worshipped at the alter of Kek, became members of the Cult of Pepe, and celebrated the religion of #MAGA. Because of the various associations attached, as well as the beliefs of many 4channers, the image of Pepe has since become tied to the alt-right and white supremacy.

Spencer ends the article referencing Adam Curtis’s amazing documentary, Hypernormalisation. In the film, Curtis points to the Reagan administration’s use of “perception management”: tales of UFO’s and other conspiracy theories were encouraged in order to distract from the complexities of the real world. According to Curtis, “anything can be anything… reality is not important in this context, reality is simply something that you handle.” Therefore, even if “meme magic” is not real, it is still a dangerous phenomenon because reality is unimportant. So long as enough people believe in it, meme magic can have real consequences.

Early in her controversial book, Kill All Normies: Online Culture Wars From 4chan and Tumblr to Trump and the Alt-Right, Angela Nagle notes the prominence of two movies referenced in memes and images used by the alt-right on 4chan: Fight Club and American Psycho. I’m very interested in the figure of Patrick Bateman and his own hero-worship of 1980’s Donald Trump.

Near the end of American Psycho, serial killer and wealthy investment banker Patrick Bateman takes a moment to admire the Manhattan skyline: “I look up, admiringly, at Trump Tower, tall, proudly gleaming in the late afternoon sunlight.” In the next sentence, the euphoric atmosphere of his daydream shatters as Bateman spies two teenagers ripping off tourists in front of the glorious tower. Bateman suddenly must “fight the impulse to blow them (the teenagers) away.” Throughout the novel (and film), he eagerly seeks to meet and impress Trump, going to such lengths as attending a U2 concert and dining at restaurants frequented by his idol. In the midst of his constant search, Bateman performs labor that ghoulishly parallels the work Trump performed within 1980’s New York City. Bateman acts as a private agent for the neoliberal state, brutally murdering economic deviants such as homeless men and female prostitutes. By removing these worthless human viruses from the system, Bateman refuses them access to the city’s resources. Similarly, Trump helped transform 1980’s New York City into a gentrified space for the rich to live, work, and play. This often took violent forms, such as when he responded to the “Central Park Five” case by purchasing full-page ads calling for the death penalty and proclaiming, “I want them to understand our anger. I want them to be afraid.” For Bateman, the figure of Trump himself, as well as Trump’s brand (as represented, for example, by the Trump Tower), become sygils through which Bateman furiously attempts to will his power, influence and success into being.

Angela Nagle’s description of gamergate and 4chan focuses on the gatekeeping rampant within online culture. Women are viewed as encroaching on the masculine world of 4chan and are typically ridiculed and sometimes threatened. During Gamergate, women who dared write online about video games were doxxed, threatened, and in some extreme instances, attacked in the ‘real-world’ (Nagle 22-27). It is through sexualization and violence that these “worthless human viruses” are removed from the system of the “manosphere.”

At one point in the novel (and film), Bateman believes that an ATM instructs him to 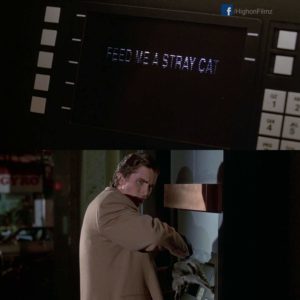 “FEED ME A STRAY CAT” (395).  This is reminiscent of the 4channers who believe that the computer is speaking to them through the numbers (“dubs” and “trips”) assigned to their comments on the site. Whether or not this ATM actually speaks to Bateman is insignificant. What matters is that his sort of magical thinking (almost) results in the real-world killing of a cat.

It is not only machines that speak to Bateman. Throughout the novel, advertisements, CD covers, and fashion labels are read, obeyed, and interpreted by Bateman. While hunting for prostitutes and potential victims, Bateman notices a young blonde woman standing in front of the word “M E A T,” painted in large red lettering on the wall behind her. He shares with the reader that “the way the letters are spaced awakens something within me” (168). People and the objects and words that surround them are constantly remixed into something like memes for 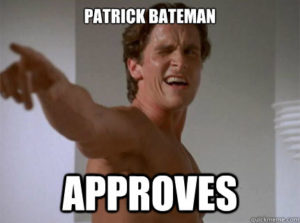 Patrick Bateman to share with his readers, just as one might share memes with his or her followers on Twitter. The book itself reads like the participatory, misogynistic, and violent culture of 4chan: flowing from different genres of writing, from music review, to political diatribe, to sex, to vitriolic and racist diatribes against minorities, to graphic gore and violence. There is no clear separation here between the banal and the macabre. It makes sense that Patrick Bateman has become a meme popular amongst the 4channers. In fact, some members of the online left have argued that American Psycho has been used so much by

the alt-right and 4chan that it has lost all of its ability to work as a social critique. I have to disagree (and not just because I love talking about American Psycho). Since Trump’s presidential campaign and subsequent election, American Psycho memes have been used repeatedly to critique Donald Trump and author Bret Easton Ellis auctioned off an autographed American Psycho poster with “Make America Great Again!” written in the foreground. Through these memes (assumedly made by members of the left), viewers are reminded that Patrick Bateman is not the sort of person one should strive to emulate. By presenting Trump (and his family) as Bateman-types, these memes work to show Trump’s cruelty, misogyny, racism, greed, anti-social attitude, and violence. These memes also work by mocking the Trump clan as being “psycho.” Ironically enough, through these anti-Trump memes, Patrick Bateman finally received his wish: he is just like Trump. 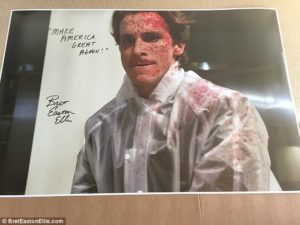 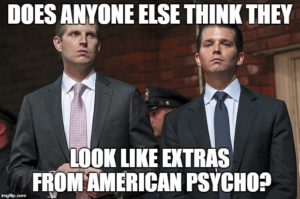 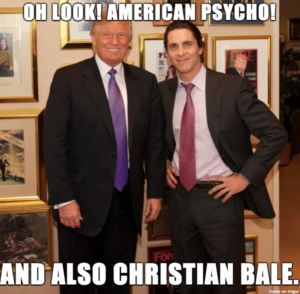 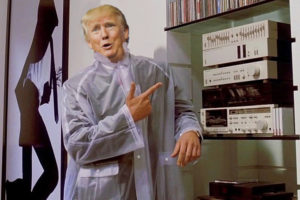 ‘Feed me a stray cat’: Meme Magic and Worshipping Donald Trump by Caitlin Duffy is licensed under a Creative Commons Attribution-ShareAlike 4.0 International License.