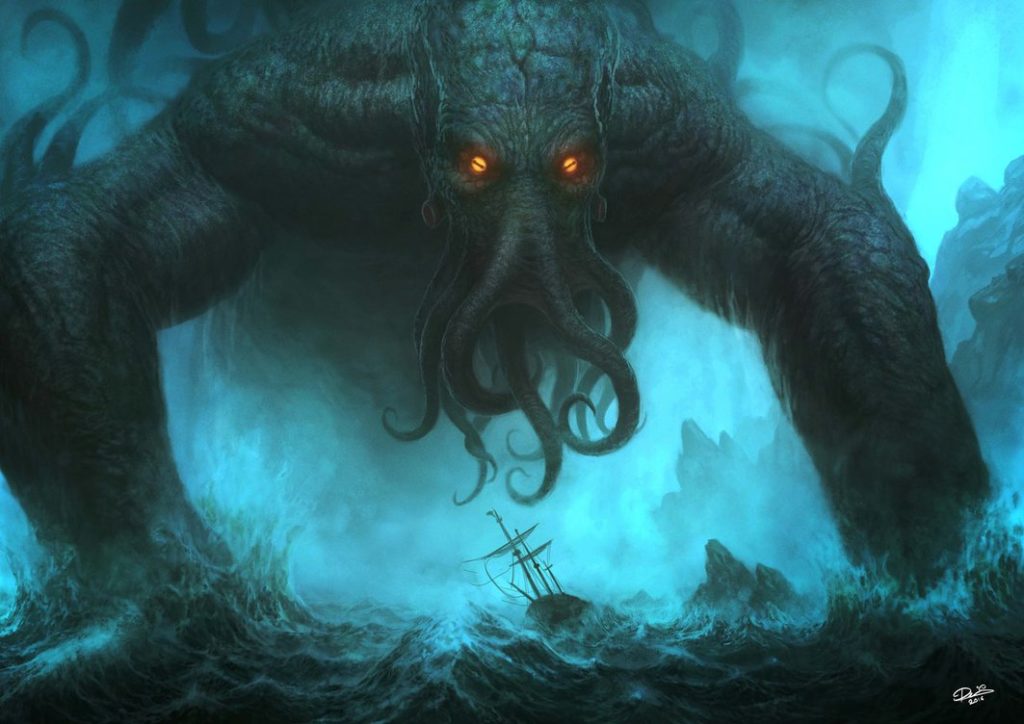 This week, for my American Gothic independent study, I’m focusing on the ecogothic (I admit, I also focused quite a bit on it last week too, but I can’t help it… it’s way too interesting!). The fiction I examined alongside various academic texts included works by Edgar Allan Poe, Nathaniel Hawthorne, Ambrose Bierce, and H. P. Lovecraft.  While I’ve long been interested in his work, I’ve yet to ever write about Lovecraft. Given the preponderous amount of scholarship and the cult-like following surrounding Lovecraft, I’ve honestly always been a bit nervous to discuss his work. Today, I conquer this fear by briefly discussing “The Call of Cthulhu” alongside Simon C. Estok’s concept of ecophobia.

Estok defines ecophobia as “an irrational and groundless hatred of the natural world, as present and subtle in our daily lives and literature as homophobia and racism and sexism” (208).  He encourages ecocritics to analyze ecophobia as a means to progress the study of ecocriticism more towards activism. Right now, he argues, the ecocritical support of openness and its avoidance of theory are both damaging to the school of thought. Estok wants an ecocriticism that boasts a clear (yet still wide-ranging) set of terms and methodologies, that does not allow speciest or prejudicial thinking into its realm. Instead, Estok’s ecocriticism engages with activism and theory through a number of different methods, one of which being the close study of ecophobia. 1 Finally, Estok also encourages ecocritical scholars to begin approaching the texts they’re working with by first researching the “cultural, intellectual, and environmental history surrounding” the text and author (211). This paper was first published in 2009 and has since been cited by numerous ecogothic researchers.  Like many others, I find his concept of “ecophobia” to be very inspiring, as it encourages a more active approach to literary study. If we can use ecogothic texts to study deeply ingrained cultural perceptions and attitudes towards nature, our work has the potential to elicit real-world change.

Examples of the ecophobic are littered throughout Lovecraft’s fiction. If I were to write a seminar-length article about this topic, I’d begin, as Estok encourages, with research 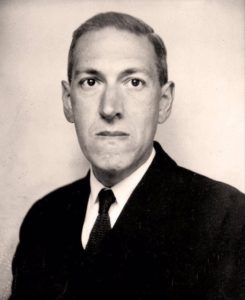 surrounding the environmental attitudes, events, and sights that surrounded Lovecraft as he wrote his short stories. For now, given the amount of time I currently have to write this post, I need to be satisfied with my knowledge of earlier New England culture by which he most certainly was at least influenced. Early American texts often depicted Nature as something which could be mastered (ie, the frontier), but that could also potentially pose a dangerous threat against mankind through its untamed, unknowable, wilderness. 2 American depictions of natural disasters today continue this belief in the innate separateness of Nature from humanity. According to Andrew Smith and William Hughes, this sometimes takes the form of “an avenging force- or, even more monstrous, an alien entity utterly indifferent to the fate of humanity” (11, emphasis added). In Lovecraft’s Cthulhu fiction, the reader is confronted with a collection of “the great old ones,” Gods who originated amongst the stars, and who have since rested below the surface of the Earth, waiting for their time to reemerge. Cthulhu and his fellow gods are not originally beings of Earth, allowing Lovecraft to take the Puritan view of alienation to its most extreme level. Although they are aliens of some sort, the great old ones seem to control nature, evidenced by the storms and earthquakes which often occur at the same time as their power increases or when they are able to communicate via dreams.

Lovecraft’s ecophobic impulses are not limited to his Cthulhu myth and he’d definitely be an interesting writer to examine through the dual lenses of the ecogothic and ecophobic.

“Mortal, ephemeral and bold,
In mercy keep what I have told,
Yet think sometimes of what hath been,
And sights these crumbling rocks have seen;
Of sentience old ere thy weak brook
Appear’d in lesser magnitude,
And living things that yet servive,
Tho’ not to human ken alive.
I AM THE VOICE OF MOTHER EARTH,
FROM WHENCE ALL HORRORS HAVE THEIR BIRTH.”