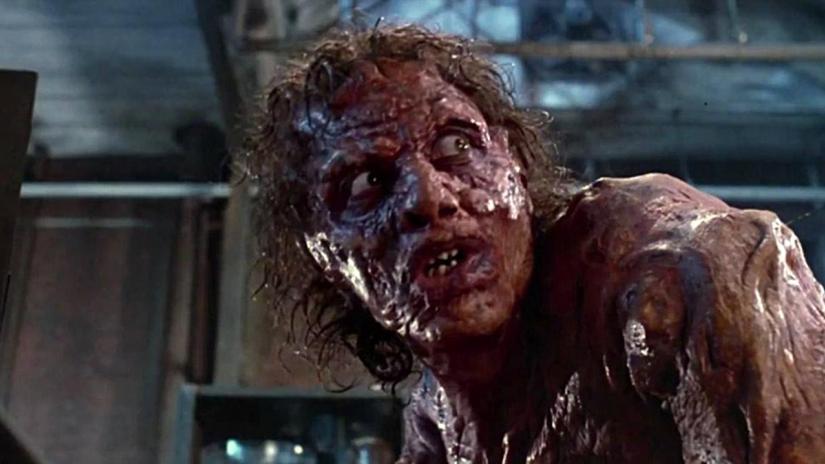 Jeff Goldblum in David Cronenberg’s THE FLY (1986), a classic of the body horror sub-genre.

Knowing that this week was centered on avatar and gaming literacies, I had assumed that I would focus my blog post on some of my favorite horror video games. However, while I was attending the Ann Radcliffe Academic Conference (housed within the Stoker Con, a convention for horror writers), a paper was presented which focused on body horror. I was reminded of our previous discussion of mutation when we read Hayles’s chapter on posthumanism. I was further encouraged by many connections I was able to make between body horror and D. Fox Harrell and Chong-U Lim’s article, “Reimagining the Avatar Dream: Modeling Social Identity in Digital Media.” Considering this article through the lens of body horror affords me with a darker view of avatar literacy which Harrell and Lim probably didn’t have in mind while writing their article. This more gothic view can be helpful as scholars continue to consider users’ experiences with digital identity.

What is body horror?

The term ‘body horror’ denotes a specific sub-genre within horror in which victims’ bodies are transformed either from without (via surgery, alien manipulation, etc.) or within (via disease, potions, etc.). These bodily changes usually occur as a result of something that the victim did- perhaps they purposely drank the required potion in order to complete an experiment, or their body is being transformed as punishment for a previous sin. In quoting Philip Brophy’s seminal work on body horror, Justin Edwards and Rune Graulund state that “body horror is… not so much concerned with death, but with an anxiety about the body’s degeneration or mutation, ‘a fear of one’s own body, or how one controls or relates to it.'” 1  Famous examples of body horror films include The Fly, The Thing (1982), Hostel (2005), and any zombie film.

What is the avatar dream?

According to Harrell and Lim, the avatar dream is the visionary goal that through the computer, users can become whoever and whatever they want.  In video games and digital role-playing games, users select a avatar that represents the user as their ‘stand-in.’ Through social media, users can create entire profiles (that often include a profile picture) that work as their avatar within the realms of sites like Facebook and Twitter. The construction and use of avatars are nothing new and can be traced to literature: writers like Nathaniel Hawthorne and Stephen King have often written avatars of themselves into their novels and stories. Via video games and social media sites, more people can create these avatars, however, as Harrell and Lim note, it is often difficult for users to create their ideal digital selves. Their article examines the limitations faced by users in construction avatar identities, typically due to gender and racial biases infused within the construction process.

Welcome to the Jungle: Jumanji (2017) as Digital Body Horror

I’m not going to argue that the 2017 Jumanji sequel should be classified as a horror film.It is through various elements of the film (the soundtrack, the pacing, the actors, etc.) that Jumanji is placed squarely into the genre of action-comedy. That being said, I do contend that there are elements and moments within Jumanji that easily could’ve transformed it into a body horror film if it were not for the jokes which immediately follow the various traumas and challenges the main characters experience as a result of being sucked into a video game.

Martha (Morgan Turner) gets sucked into the game.

While serving their time in detention, four students (Martha, a nerdy girl who hates gym class; Spencer, a nerdy boy and avid gamer; Fridge, the high school’s celebrated quarterback; and Bethany, a shallow yet popular girl) discover a video game titled Jumanji hidden within the school’s dusty equipment closet which they were forced to organize. Eager to avoid work, the four turn on the game and select their avatars based only on the name of the avatar’s character and a short description. Once selection is complete, the four students are sucked into the game, becoming the avatars they selected, living within both the avatar’s body and the jungle world of the game. While Spencer gets to inhabit the body of Dwayne “the Rock” Johnson and seems to benefit from his added strength and confidence, the other three undergo a panic more befitting a body horror film than an action-comedy. 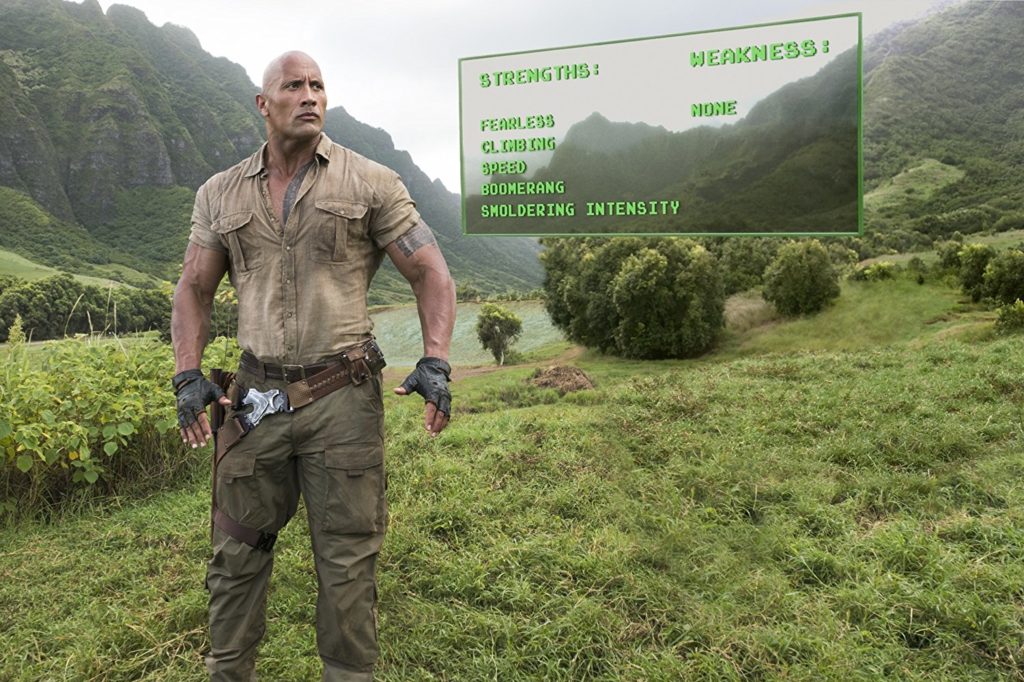 Martha stands off to the side, trying to hide her suddenly exposed midriff as the sole female avatar of the game. She is not comfortable exposing so much skin, nor does she appreciate being in a jungle full of bugs without adequate coverage. 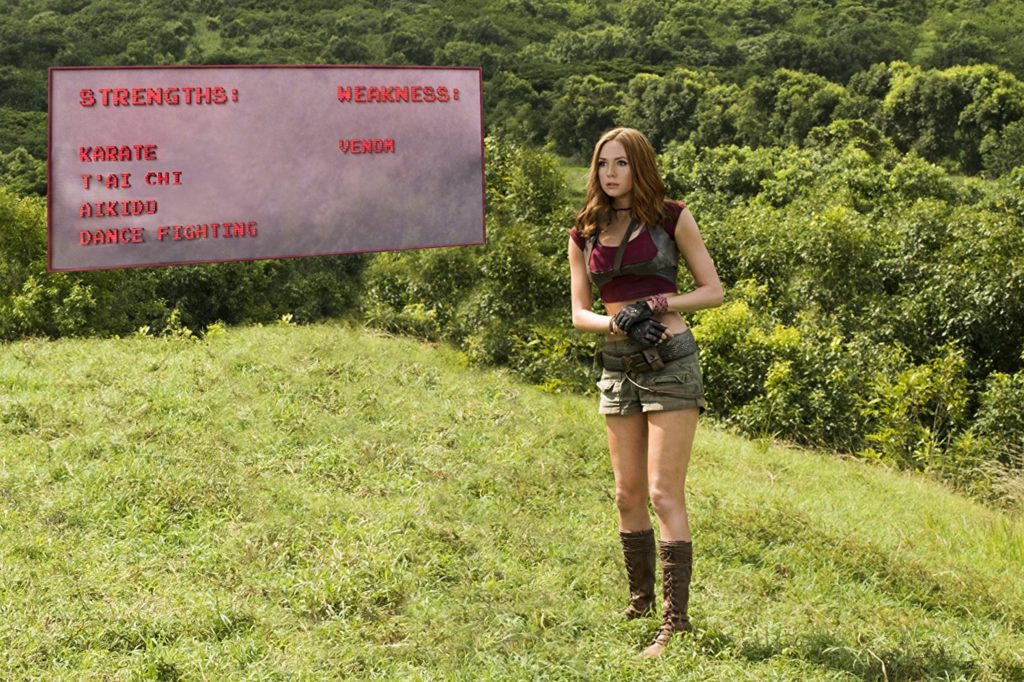 Fridge finds himself in the avatar body played by Kevin Hart. Fridge immediately opines the loss of his strength, speed and height. These are aspects of his real-world physicality which he worked hard to achieve and maintain. He now finds himself not only in a treacherous jungle, but in a vulnerable body, reduced into a mere valet for Spencer’s avatar. 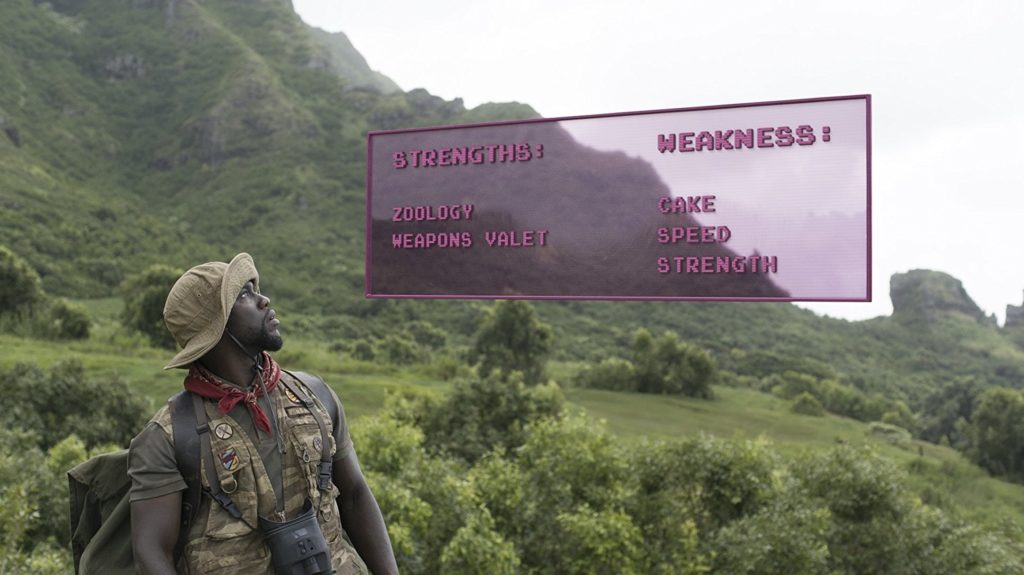 Finally, Bethany selects the “curvy scientist” avatar, which means that she transforms into the avatar played by Jack Black. Her plot-line lends itself the most to body horror interpretations. Before playing Jumanji, Bethany was very concerned with her physical appearance, as well as with her digital identity, which she carefully curates and maintains. She looses many aspects of her identity in this mutation, but most importantly for Bethany, she suddenly has a new gender identity. 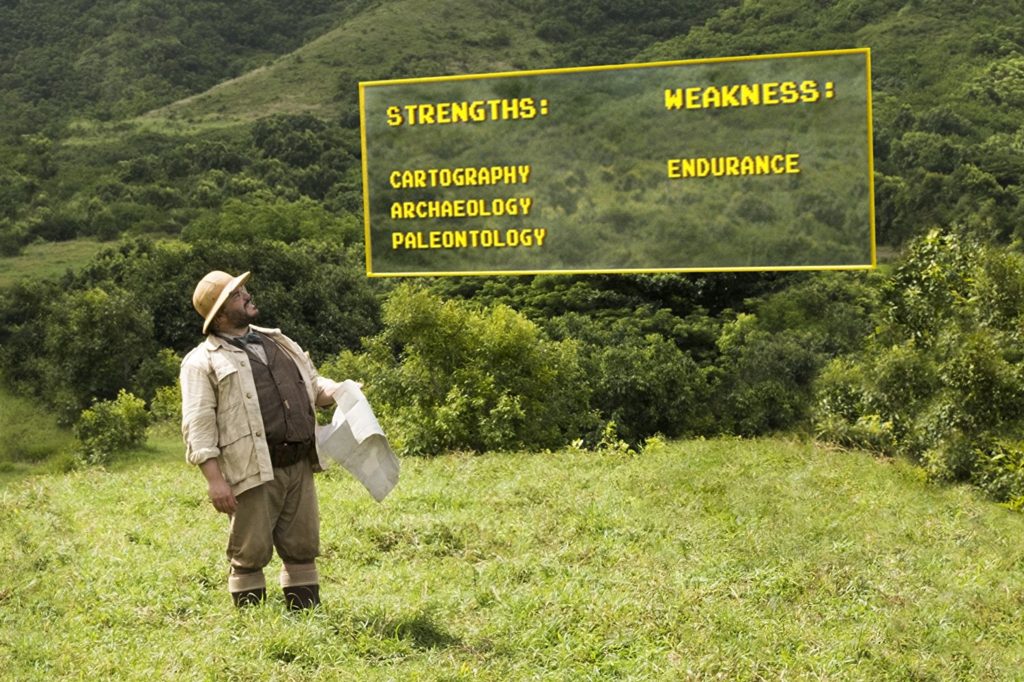 In order to help this film remain firmly in the action-comedy genre, after Bethany’s initial shock at her new body, she instead becomes the butt of many jokes and audience members are encouraged to laugh as Jack Black behaves effeminately (that’s a whole other set of issues which I’m not going to attempt to unpack here). Bethany also eventually deals with her new body and even finds things about her avatar to be excited about. At one point, she needs to pee, but doesn’t know how to pee in her new masculine form. She asks the other boys to teach her. After she relieves herself, she calls Martha over to “oh my god, look at my penis!” Both girls giggle at this new found discovery.

In their article on the avatar dream, Harrell and Lim note that “some user groups are underrepresented and/or unfairly stigmatized in virtual environments” (52). This is certainly the case (and a source of humor) in Jumanji (2017). The only reason why Bethany must mutate into a masculine form is because there was only one female character available. That single female character, inhabited by Martha, is designed for the male gaze- she is sexualized both through her appearance, dress, and her attributes. Although she can (and does) kick some ass, she is also used as a distraction. While the others sneak around a set of guards near the end of the film, Martha must saunter over to them, flirt, and dance with/for them (one of her skills is “dance fighting”). Fridge’s black avatar is servile and weak. The video game users who belong to racial and gender minorities mentioned by Harrell and Lim often cannot find avatars that both look like them and exhibit desirable traits. Rather, avatars unfortunately commonly contain “box effects” which are user’s experiences as a result of failures of classification systems (54). This includes racial and gender stereotypes attached to avatars, which users must inhabit. Since Martha’s avatar is the “sexy one,” she must learn to flirt in order to survive the game. As Fridge’s avatar is a valet, he is forced to serve Spencer to survive.

In How We Became Posthuman, Katherine Hayles argues that “The crisis named by mutation is as wide-ranging and pervasive in its import within the pattern/randomness dialectic as castration is within the tradition of presence/absence, for it is the visible mark that testifies to the continuing interplay of the dialectic between pattern and randomness, replication and variation, expectation and surprise” (48). The victims/monsters within body horror films are characterized by a series of randomness which disrupts any hope of a pattern. They take on new and often unknown forms, and are rarely (if ever) attached to a stable signifier. While dealing with this mutation, body horror characters must learn the new rules of their new unstable forms and how to behave within their new identities.

In his article “Good Video Games and Good Learning,” James Paul Gee argues that one reason why educators should mimic game designers when creating lesson and unit plans is that, in a game, students must take on a new identity and fully commit to this new world and new self (34). This seems to be what Harrell and Lim are working towards in their Chimeria program, which will allow users to “understand the experiences of others”, while also “demonstrating how box effects are detrimental” (58). In other words, Harrell and Lim have purposefully created a game that demonstrates the horror of living with a marginalized identity. Harrell adds that, “there exists a perceived appropriateness of particular ways to present one’s self in different situations, as well as social avenues that may be closed off or accessed only with more difficulty due to externally defined social prejudices and biases” (60). In the example of gameplay from Chimeria:Gatekeeper, we see a character reflect that “Well, I got in, though I had to pretend to be something I’m not” (image on 59). The fear of destabilization and loosing control over one’s own personality, body, and self, is present both in Harrell and Lim’s game, as well as in body horror films.

In body horror films, the character undergoing changes must learn the new rules of their identity and behave accordingly in order to survive the movie. Sometimes, characters decide to kill themselves as discovering the requirements of this new identity (I could give examples, but I don’t want to spoil any of these lovely movies for anyone. Just to make my point clear- if you learned that your new identity was a monstrous one whose survival required the killing and eating of humans, would you accept these new rules, or remove your new self from the equation?). Still others find themselves in new bodies that render themselves utterly helpless and find that they must simply suffer in their mutation (ie: Rosemary in Rosemary’s Baby (1968) or Reagan in The Exorcist (1973)). 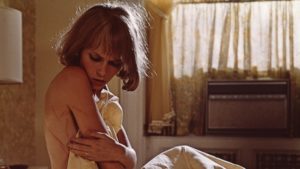 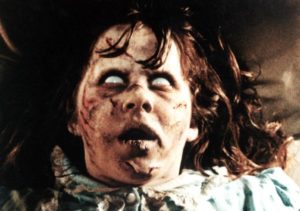 Return to the Jungle

In Jumanji (2017), elements of body horror can be found in the mutations experienced by the four players while inhabiting their avatar bodies. They each had to learn to survive as avatars in which they had very little choice (there was VERY little description provided on the game’s ‘Character Selection” screen).  Because of the minimal choice involved, the players have little control, a crucial element in body horror, according to Brophy’s definition.  Partly because of their lack of choice and control, three of the four players quickly find that there is little or no pattern between their “true” selves and the new avatar identity assigned to them. This is a true mutation in Hayles’s description, as pattern is fully disrupted.  Harrell and Lim’s “reimagination” of the avatar dream is needed to avoid this sort of digital body horror. If more selection, and therefore control, is offered to users of digital spaces in constructing their avatars and identities, then horrific mutation can potentially be avoided and greater representation of all user groups, especially including those that are currently marginalized, can occur, hopefully without the baggage of “box effects.”

Anyway, I look forward to visiting and presenting in class this week! 🙂

The Avatar Nightmare: Body Horror and Digital Identity by Caitlin Duffy is licensed under a Creative Commons Attribution-ShareAlike 4.0 International License.