One of the readings for my Digital Rhetorics class this week, William C. Kurlinkus’s “Memorial Interactivity: Scaffolding User Experiences,” deals partly with the concept of viral nostalgia. After some deliberation, I decided that my blog post would connect Kurlinkus’s viral nostalgia with the 2014 horror film Unfriended. While I initially considered connecting this week’s reading to early reaction videos, I found this topic a bit more fruitful for me (I’m currently putting together a conference paper on Unfriended and the digital ghost story for the first Supernatural Studies Association Conference on March 23rd!). While I’m not pulling something directly from the Internet, I am examining a representation of social media participation. Additionally, Kurlinkus discusses the importance of “surprises” in creating digital nostalgia in user experiences, something which is very important to the horror genre. I quickly found myself eager to discuss the focus on surprise in horror and Unfriended, as well as how this can support Kurlinkus’s point.

The trailer above should give you a good feeling for what the movie is about. It’s most groundbreaking feature is the fact that the entire film takes place on the lead character, Blaire Lily’s desktop screen. The digital ghost, Laura Barns, seeks revenge on her supposed ‘friends’ by infiltrating their social media accounts, desktop folders, and email. That’s all you really need to know.

Kurlinkus describes viral nostalgia through the example of so-called “slacktivist” campaigns like the “Ice Bucket Challenge” which (just like Unfriended) occurred in 2014. He explains why the challenge went viral:

“The challenge went viral for many of the same reasons other “slacktivist” campaigns do: it was easy, spoke to people’s sense of social currency, and provided a communal story to enter. But more than a story, the Ice Bucket Challenge was easily personalized.” (278)

Video challenges and memes encourage others to participate in its “event” through creation. Videos and memes in this sort of scheme are created by following a set of rules or a clear formula. For example, in the Ice Bucket Challenge, the most basic rule is that you must film yourself getting a bucket of icy water poured over your head. These creations are  heavily personalized, as Kurlinkus mentions, which is what gives viral nostalgia its potency. The care put into creating such a personalized product gives the product meaning, which makes it memorable. Finally, the “challenge” itself entails the creation of a product, or to borrow Kurlinkus’s phrase, “behavioral residue.” The production of residue creates further nostalgia as it anticipates a future in which the creator can re-watch his or her own past. 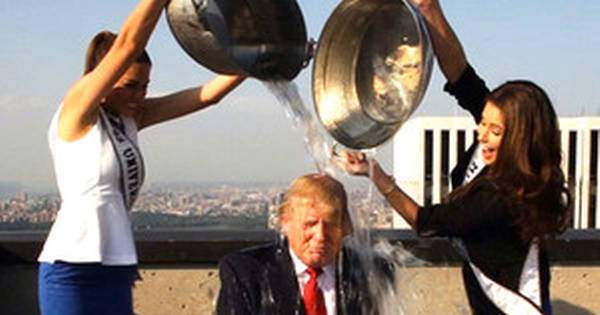 The Ice Bucket Challenge was so easily personalized that it even allowed for this bizarro event to occur. (Sorry to bring *him* into this, but I did say I was focusing on horror in this post…)

Thus, viral nostalgia describes an occurrence in which many participants seek to recreate an original moment via copies. The copies can never be true replicas and this allows for personalization and meaning.

Unfriended opens with Blaire (although we only see her cursor at this point) playing a video on the streaming service Liveleak.com.1   The video is of Laura Barns, standing alone on a basketball court. Although the image is blurry and shaky (it looks like it was filmed on a smart phone), the viewer can see Laura slowly raise a gun to her head and shoot herself. Immediately, a number of concerned adults (teachers?) and teenagers (friends? students? peers? bullies?) rush towards her body. 2 There’s a lot that can be said about the presence of death online, as well as how easy it is for users to find and view “real death” online and how difficult it is to police such content. Shellie McMurdo does a wonderful job examining this aspect of the film. For now, I’m just going to table these issues here and maybe cover them in a later blog post. 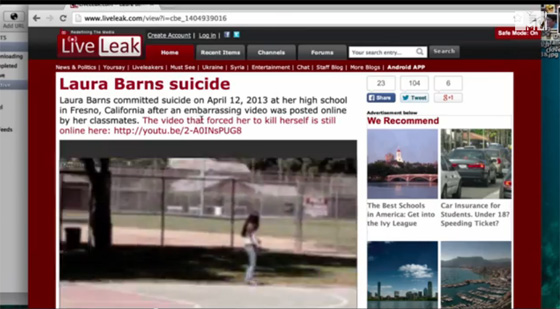 Although never directly explained, the fact that Laura Barns’s suicide was recorded, uploaded, streamed, and went viral online, could have something to do with why she is able to return one year later as a vengeance-seeking digital ghost. Unfriended goes out of its way to make clear that anything that goes online will never die or disappear.

What happens if we view this initial suicide video as the original video in a case of viral nostalgia? After Blaire watches this video, she meets with her five friends in a Skype chat which feels like a weeknight ritual. It is within this Skype chatroom that Laura (under the guise of “Billie227”) exacts her revenge, picking off the teenagers one by one. According to the film’s logic, if you respond to a ghost online, you open up the door for the spirit to infect your computer, social media accounts, and your biological body and mind. Laura kills each teen by overriding their brains and controlling them to commit suicide on camera, while forcing the others to watch via Skype. 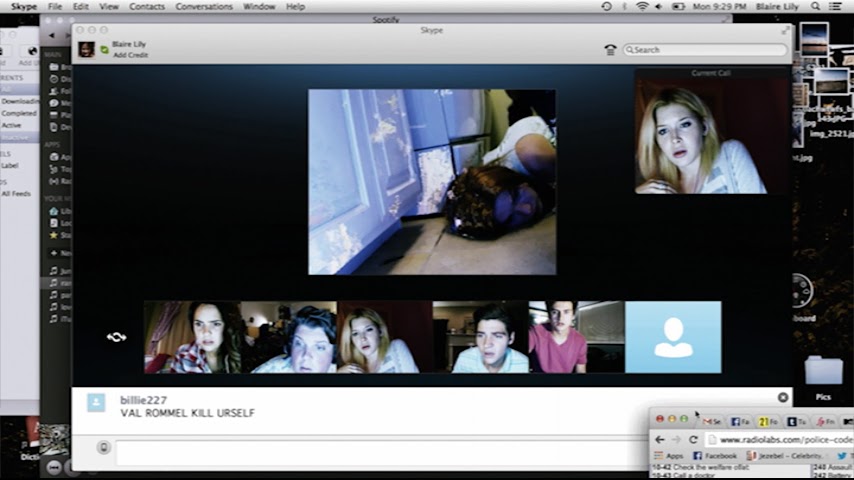 Each of these new suicide videos seem to fit Kurlinkus’s concept of viral nostalgia. Laura yearns to recreate her own suicide through each copy. There is a return of the repressed as the ghost, who is the host of trauma, according to Lisa Blackman, forces those who she blames for her own death witness each reenactment. Of course, as Kurlinkus notes, a perfect replica is impossible. In Unfriended we instead see a gothic version of personalization in viral nostalgia. Val (probably) chugs bleach (she was doing her laundry when her video was made), Ken is brutally killed with a food blender (earlier he showed off the fact that he was making his salsa, infamous for the monstrous farts it creates), Jess is killed by placing her curling iron in her mouth (Laura adds, “Maybe she will finally shut up!”), Adam kills himself using the gun he waves uselessly throughout the film, and… I guess I’ll stop here to leave you some reason to watch the movie if you haven’t yet. The point is that each of the recreations of Laura’s viral nostalgia is personalized, yet they also add to a collective memory and story.

In the amazing volume, Digital Horror, Neal Kirk’s chapter explains his concept of ‘networked spectrality.’ According to Kirk, digital ghosts diverge from the traditional ghost story of the 19th century partly because of their wide reach. Ghost stories of the Victorian era often included the narrative of a spirit seeking vengeance against a specific person or persons. Once this issue of revenge was solved, so was the ghost. With their unfinished business finished, the spirit could finally move on. According to Kirk, this familiar plot is mutated with the proper inclusion of digital technologies like the internet and social media:

“When ghosts are coupled with new media technologies, haunting is not merely a singular, personal, temporary occurrence of the supernatural, but an endemic threat to an increasingly networked and globalized contemporary society. Today’s phantoms take on the unbounded, multiple, distributive and participatory qualities of our digital networks.” (57)

What Kirk is describing here is the inherently viral nature of ghosts when they are digitized. We this in Unfriended, too. Gabriadze cleverly implemented elements of digital experience into his film’s aesthetic. For example, throughout the teens’ chat on Skype, their images freeze, buffer, and pixelate, becoming, as Manohla Dargis notes, “near-ghosts in their own machine world.” You can see an example of this in the gif below, however, I think whoever created this gif  enhanced the “ghost-i-ness.”

Secondly, the viral nature of Laura’s haunting is also displayed through the fact that she is able to take over and override their computers and bodies (like a computer/biological virus) to potentially create more digital ghosts (they all died online like Laura). At one point, the multi-tasking Blair reads through a site sent to her from her boyfriend Mitch. It explains that you should not answer messages from the dead online, from which audiences can infer that this is not an isolated incident. There are other ghosts out there in the invisible yet ubiquitous digital network. 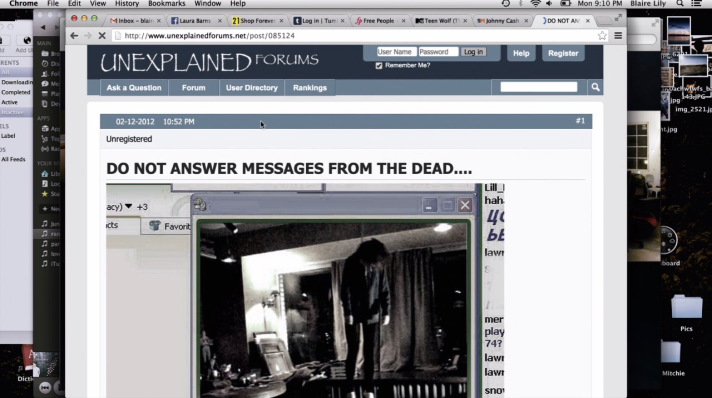 According to Lisa Blackman, social media and transmedial storytelling allow for new realities and new conceptions of time and space (17). Unfriended applies both in its narrative, as Blaire (and Laura) moves between Youtube, Skype, Facebook, Google, Chatroulette, and Spotify. Each character’s Facebook and Skype accounts (including Laura’s) were created in “real life” as part of the film’s advertising campaign. According to Blackman, this move blurs past, present and future, while social media’s role also defamiliarizes space. Although the teens are not actually together, they are only “together” in a Skype chatroom while physically distant, each in their own homes, the audience doesn’t feel their isolation immediately.

If the past is able to blend into the present through the use of multiple medias, or through the use of photographs and videos on our social media accounts, can nostalgia truly be part of these viral campaigns or of digital hauntings? Can there even be a digital ghost, or are we all ghosts online?