Hannah W. Foster’s The Coquette (1797) has an epistolary form and was a thinly veiled fictionalization of the life of Elizabeth Whitman (1752-88). When Whitman died of childbirth at the Bell Tavern in Massachusetts, the event was wildly sensationalized and reporters blamed her demise on the reading of romance novels. 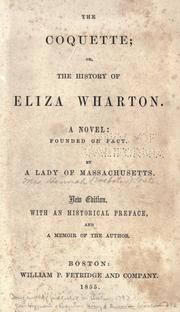 The title page of The Coquette

In Foster’s novel, Eliza Wharton is a middle-class woman whose recent engagement to a clergyman ended in his death. As Eliza consented to this marriage only out of “obedience to the will and desires of my parents” and that she “never felt the passion of love for Mr. Haly,” Eliza decides to enjoy her newfound freedom (5). She stays some time with her friends, General and Mrs. Richman, where she attends balls and is courted by two men: the Reverend J. Boyer (boring but respected by Eliza’s friends and the community) and Major Peter Sanford (a self-avowed libertine and rake who presents himself as a man of great wealth and refinement). Although Eliza seems to have a more passionate attachment to Sanford, she ultimately obeys the wishes of her friends and family, and decides to choose Boyer. However, after catching Eliza in her mother’s garden speaking closely with Sanford (according to Eliza, they were in the process of breaking up), Boyer destroys all of his ties to Eliza and marries another woman. Sanford also marries someone else (primarily for money), but continues to openly flirt with and court Eliza. Following the break up with Boyer, Eliza is melancholy and reclusive. Sanford’s continued pursuit causes Eliza to become even more emotionally unstable despite the efforts of her friends (Lucy Sumner and Julia Granby) and mother to raise her spirits. Eliza becomes pregnant with Sanford’s child and gives birth alone in a tavern. The baby is stillborn and Eliza dies in childbirth. Sanford looses all of his property, his wife leaves him, and he is forced to leave town. The novel closes with Julia Granby’s description of Eliza’s gravestone. This stone is recreated on the final page of the novel.

There are a few connections within this novel to the American gothic mode, primarily its focus on the tensions between rationality and feeling. It seems that the novel as a whole argues that reason is more valuable than “fancy.” Despite Eliza agreeing with her friends and family that Boyer was the more reasonable choice (“My reason and judgement entirely coincide with your opinion…” (28)), she feels passionately for Sanford (“…but my fancy claims some share in the decision” (28)).

Independence and freedom are persistently mentioned throughout The Coquette, which is particularly fascinating given its temporal proximity to the American Revolution. Independence is frequently tied to financial wealth. For example, Lucy reminds Eliza that Boyer is just as good as any man that she has a right to claim. As a middle class woman, Eliza may have dreams of marrying the (supposedly) rich Sanford, but she does not have the liberty to make that choice. Additionally, she seeks to maintain possession of the freedom she imagines for herself as a single woman by avoiding marriage with Boyer. By marrying him, she imagines a life that is entirely centered within the home, rather than out in society (29). Later in the novel, Sanford alleges that he would marry Eliza if she or he had any fortune. As this was not the case, he did not have the liberty to marry the woman who his fancy had chosen. When Eliza learns that Sanford was not rich as she had been lead to believe, she notes that “…he was by no means possessed of the independence which I fondly anticipated” (120).

Public performance is vitally important within the novel for the characters to become valuable and respected members of society. Therefore, in The Coquette, value is in the eye of the beholder. The public controls the relative value connected to each member of society. Therefore, despite his well-known past as a libertine, Sanford is able to be accepted into well-respected members of the community due to his masterful performance as a wealthy gentleman. When Boyer sees Eliza together with Sanford alone in the garden, he refuses Eliza’s request to explain herself. The sight of them together was all that matters to Boyer, it was enough for Eliza to completely loose all of the love and esteem he once felt towards her. Once Eliza becomes a recluse, she removes herself completely from the public’s view. Her value therefore remains stagnant, she cannot gain or loose any value when she is out of the public’s sight.

Reputation is hyper-valued within this novel. In fact, it argues that reputation is more important than life itself. Rakes are considered the “assassin” of reputation (maybe they can even be considered a form of serial killer?) and Eliza (just like many other fictional fallen women) dies shortly after her reputation is destroyed. After Eliza dies, Julia writes to Lucy:

Not only the life, but what was still dearer, the reputation and virtue of the unfortunate Eliza, have fallen victims at the shrine of libertinism! (163)

Finally, I’m really intrigued by the seemingly ubiquitous role of the garden in The Coquette (there is also a prominent garden in Charlotte Temple!). I think an ecogothic reading of the garden might be fruitful, especially as connected to other early American formulations of the Garden of Eden. The garden of Eliza’s mother’s house is described as being the happy setting of Eliza’s and Lucy’s early friendship. However, it also becomes the site of the death of Eliza’s reputation (when Boyer ‘catches’ her with Sanford) and the death of Eliza’s virginity (she “always” meets Sanford secretly in the garden before admitting him into her room).

The Coquette (1797) by Caitlin Duffy is licensed under a Creative Commons Attribution-ShareAlike 4.0 International License.