Confessions of an English Opium Eater (1821)

Thomas de Quincey’s Confessions of an English Opium Eater was first published anonymously in the October and September editions of the London Magazine in 1821 before its publication in book form under De Qunicey’s name in 1822. A third (and much more lengthy) edition was published in 1856 after De Quincey revised the text. However, according to Philip Smith, the 1821 edition is considered the “definitive version,” while the 1856 publication is viewed as a “rambling” failure (v-vi).

The serially-published 1821 edition “created sensation” as it assumed authoritative status on opium addiction. It was not until long after De Quincey’s death that systematic studies of narcotics were prevalent, so his account was vitally important. Unfortunately, Confessions was also deeply criticized for its largely romantic view of the drug. Smith notes that De Quincey “displays an ambivalence toward, and in many places an affection for this substance” (v). 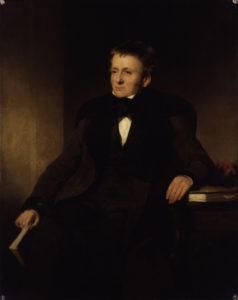 Confessions is divided into two parts. Part I contains a note “To the Reader” and his “Preliminary Confessions.”

“To the Reader” contains an explanation behind De Quincey’s decision to write the text while simultaneously setting up the narrative. Basically, De Quincey notes that, while it is unfavorable to display his faults to the public eye, he thinks that an honest description of opium use would prove “useful” (1). He also claims to have “indulged in [opium] to an excess not yet recorded” (2).

“Preliminary Confessions” contains his early history, which he cites as some of the reasoning behind his opium use. He was a great classical scholar of Greek at a very young age, however, his guardians unkindly refused to allow him to leave private school for university upon his desire for change. He becomes a homeless runaway in Oxford Street in London during his late teens from 1802-1803. He befriends and falls in love with a young prostitute named Ann.

The introduction briefly prepares the reader for the “second birth” of De Quincey’s sufferings, which occur after his time as a homeless teenager (31). Rather than move from starvation and living on the street to pure pleasure and success, De Quincey is ravaged by his stomach pains and fated to become an opium addict. This addiction causes him much sleepless nights and nightmares, of which he goes into greater detail in the next few chapters.

“The Pleasures of Opium” describes the positive phase of De Quincey’s use of opium, which occurred from 1804 until 1812. He claims that the effects of opium are very different from those produced from intoxication by wine: while wine causes a disorder of the spirits, opium invigorates “man’s self-possession” and “introduces amongst [the mental facilities] the most exquisite order, legislation and harmony” (36). He provides a description of his typical night spent in London after consuming opium in order to prove that opium does not render a user lethargic or unmovable. He often visited the opera or the marketplace while on opium.

“Introduction to the Pains of Opium” briefly narrates De Quincey’s growth from youth to maturity. He had no job, but instead lived off of his considerable inheritance. In 1813, he is plagued by bodily illness and “mental suffering” (46). He experience extreme stomach pains and intense nightmares. During this year, he began to take opium daily rather than his previous use of opium only at intervals (usually on Tuesdays and Saturdays). Finally, he relates the story of a Malaysian traveler appearing at his door. As a symbol of good feeling, De Quincey gives him a large amount of opium, which the man immediately eats. This event provides fodder for De Quincey’s future nightmares.

Finally, “The Pains of Opium” details De Quincey’s extreme opium use, as well as its negative effects, including insomnia, nightmares, frightening hallucinations, and other physical symptoms.

There are a few scenes and themes which are particularly interesting to me.

First, De Quincey’s recurring discussions of class and wealth. He claims that “happiness” (through opium) “might now be bought for a penny” (34). He also notes that the “class of opium eaters” is a large one that includes both the wealthy and aristocratic as well as the poor and title-less (2-3). In his description of the pleasures of opium, he claims that he purposefully chose to use opium often on Saturdays, not because it represented a reprieve from his labors (he had no job), but because he liked to sympathize with the happiness of the poor class. By going to the marketplace on a saturday night, De Quincey is able to take part in the pleasures of the poor (41). He also notes that poor people “enjoy the full use of their natural courage” because they have nothing to loose (26). Because of their lack of wealth and property, they do not fear death. Despite the fact that a murder had recently occurred near Hounslow-Heath, close to where De Quincey was traveling at this point in the narrative, he feels no fear because of his impoverished appearance (ibid.).

After describing Ann (the 16 year-old prostitute) and her difficult life (and “the brutal ruffian who had plundered her little property” (19), De Quincey describes the ineffective public supports in London:

Hers was a case of ordinary occurrence (as I have since had reason to think), and one in which, if London beneficence had better adapted its arrangements to meet it, the power of law might oftener be interposed to protect, and to avenge. But the stream of London charity flows in a channel which, though deep and mighty, is yet noiseless and underground; not obvious or readily accessible to poor houseless wanderers: and it cannot be denied that the outside air and frame-work of London society is harsh, cruel, and repulsive. (19)

Finally, there is a great amount of gothic imagery, especially in the final “pains of opium” sections. The nightmares and terrifying visions which occur to him as a result of his daily use of opium are pure gothic fantasies. He cannot stop seeing phantoms and ghosts in the darkness of his room and the real-life meeting with the Malaysian travel inspires countless nightmares in which De Quincey is transported to a gothic version of Asia, “the part of the earth most swarming with human life… Man is a weed in those regions” (65).

In China… I am terrified by the modes of life, by the manners, and the barrier of utter abhorrence, and want of sympathy, placed between us by feelings deeper than I can analyze. I could sooner live with lunatics, or brute animals… the reader must enter into before he can comprehend the unimaginable horror which these dreams of oriental imagery, and mythological tortures, impressed upon me. (65)

He imagines himself in many different forms and predicaments in this gothic nightmare Asia. He is worshipped as an idol, then sacrificed and buried with mummies (65); he kisses crocodiles and laid in the slime of the “Nilotic mud” (65).

A second gothic nightmare worthy of focus is his bizarre belief that:

I feared (though possibly it will appear ludicrous to a medical man) that some dropsical state or tendency of the brain might thus be making itself (to use a metaphysical work) objective; and the sentient organ project itself as its own object…it seemed likely to survive the rest of my person. (64)

Confessions of an English Opium Eater (1821) by Caitlin Duffy is licensed under a Creative Commons Attribution-ShareAlike 4.0 International License.