Steven Shaviro’s Post-Cinematic Affect (2009) simultaneously (1) guides readers through our current digital mediascape, (2) explores the tight relationship between capital flow and the image, and (3) argues for the creation of a cultural theory that addresses media within this new era of late capitalism.

Digital technologies, together with neoliberal economic relations, have given birth radically new ways of manufacturing and articulating lived experience… developments that are so new and unfamiliar that we scarcely have the vocabulary to describe them, and yet that have become so common, and so ubiquitous, that we tend not even to notice them any longer. My larger aim is to develop an account of what it feels like to live in the early twenty-first century. (2)

He purposefully chooses four texts that were not critically well received, feature celebrity pop icons, and use multiple forms of digital media to analyze and trace the power of post-cinematic affect: the music video for Grace Jones’s Corporate Cannibal (2008) and its ; Olivier Assayas’s film Boarding Gate (2007); Richard Kelly’s film Southland Tales (2007); and Mark Neveldine and Brian Taylor’s film Gamer (2009). It is through these post-cinematic works that he performs an “affective mapping” (6) of the “participatory panopticon” (68) of our present late capitalist surveillance society. For Shaviro, affective maps “do not just passively trace or represent, but actively contract and perform, the social relations, flows, and feelings that [media works] are ostensibly ‘about'” (6). While content is largely nonexistent, affect is the surplus value that is produced by media works, or what Shaviro terms the “machines for generating affect” (2-3).

Each chapter between the introduction and coda focuses on a post-cinematic media work and a “diagram” of the contemporary social field (6):

He defines post-cinema media as the dominant aesthetic form of the twenty-first century. Cinema today is no longer more popular than digital and computer media. Digital media is not only popular online, but can be found in an overwhelming plethora of spaces. Even films are created digitally, with an awareness that most audiences will view the film on their laptop screen, streamed through their television, or via a DVD. Finally, digital recording is prevalent via social media and (other) surveillance systems.

And where cinema was an art of individuated presences, digital video is an art of what Deleuze called the dividual: a condition in which identities are continually being decomposed and recomposed, on multiple levels, through the modulation of numerous independent parameters. (17)

Shaviro’s reading of the digital space and time as elements that are continuously and simultaneously created and presented it also helpful. Poppy’s Youtube videos operate within this same belief (she stands within an ’empty’ space while maintaining a disquieting lack of emotion), as does Unfriended. While cinema media presents viewers with a recording of an absolute and pre-existing space in time, the digital video creates its on space in real time through its modulations (16). The figure within the digital video is not based on a real human, but is instead a signal made up of a network of underlying binary code that exists at the exact moment and in the exact digital space that you view it (17).

In his chapter on Boarding Gate, the concept of flexibility returns as virtues of employability. In order to survive the events of the film, the main character Sandra (Asia Argento) must constantly “improvise from moment to moment” (56). She takes on different contract-career roles (prostitute, drug dealer, hired assassin, etc.) when she needs them and drops the immediately after their use is fulfilled (ibid.). What I find most fascinating is what Shaviro describes as the alternative. What if Sandra was unable to be so modulating?

Sandra must become a supreme actress, a virtuoso of improvised performances, if she is to outrun, and avoid, the horrific fate- to become a pure object devoid of agency, and a sexual plaything for sadists… (57)

As I read through this, I immediately connected this to my research surrounding Stretch, the final girl of Tobe Hopper’s The Texas Chainsaw Massacre II. While not emblematic of the post-cinematic age, this work is a part of the larger late-capitalist era. Stretch constantly takes on new roles (dominatrix, career woman, girl next door, tour guide, a female leatherface, and, ultimately, chainsaw-wielding maniac), stretching herself in order to survive the film. If she had failed in this, she risked becoming “a pure object devoid of agency, and a sexual plaything for sadists” (57). Leatherface himself also takes on different roles, especially in the first film of the series, by literally putting on different masks and outfits (the killer, the sexy girl, and the mother), however, the stakes are perhaps not as high for him as they are for the films’ victims. 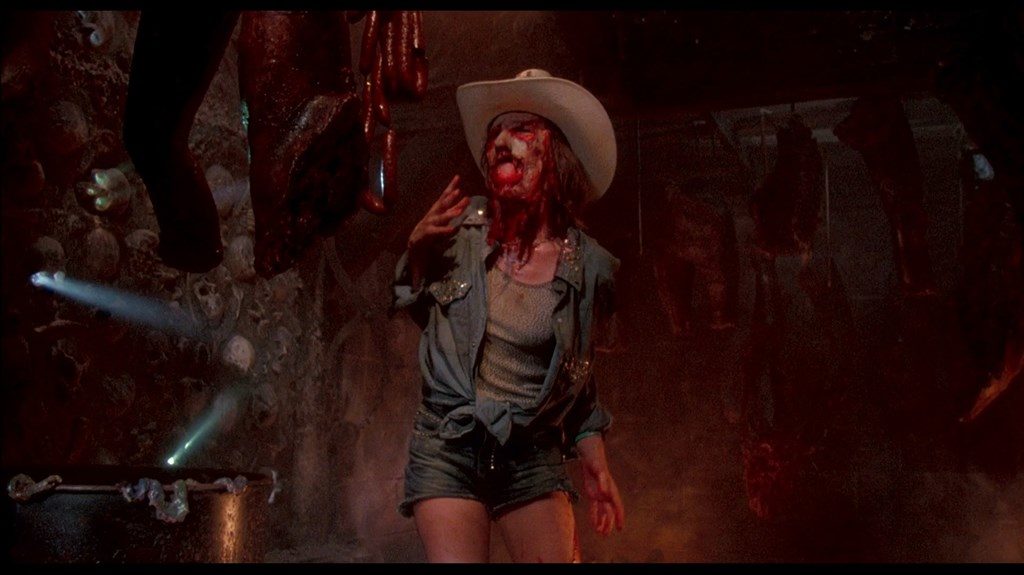 Stretch as a female Leatherface

2. The “participatory panopticon” as it exists in and is represented by post-cinematic media is also a really helpful concept for me, especially once I begin to look closer at found footage horror films. First, Shaviro argues that  Southland Tales displays a world in which the “future haunts us with its hints of hope and danger, and its promises or threats of transformation” (67). Immediately after this, he states that Southland Tales “ponders what it feels like to live our lives within” our post-cinematic landscape (ibid.). He describes the vital role that social surveillance plays within the film, as well as within our own world. Social media encourages users to conduct and share surveillance not only on others but on ourselves, as well (68-9). Much like Unfriended, Southland Tales is a transmedial film that not only includes the various medias represented within the content of the narrative, but uses those media to construct the narrative itself. This hypermediacy goes beyond the film itself: characters within the film had ‘real-life’ Facebook accounts and websites, graphic novels and action figures are produced connected with the film, etc. Richard Grusin argues that these “cinematic artifacts” are just as much a part of the filmic experience as viewing the film (70). Southland Tales includes images that just pop up and then disappear, unexplained (71). Sometimes, it features images within images, and multiple frames, mimicking a computer or television screen (81). In a world so focused on recording and streaming, it’s no wonder that we are haunted with the future. Not only is Southland Tales a producer of apocalyptic affect through its use of an accelerationist aesthetic (136-7), but it also reflects and creates our own world in which we constantly record the present for some future viewer.

American Psycho contains the dry and detached voice-overs of Patrick Bateman (Christian Bale), as well as the spasmodically happy soundtrack containing songs like Katrina and the Waves’ “Walking on Sunshine” and Huey Lewis and the News’ “Hip to Be Square” which play over images of murder, torture, and mutilation.  According to Shaviro, in the post-cinematic era, sound is primary and image is mere decor (80). These media productions align themselves more with music videos and television (especially televised news) in that their images don’t make narrative sense unless sound guides the viewer through it. Through monotone voice-overs (like a news-caster), “reduces the film’s images to the status of data, or pieces of information, that can be combined in innumerable ways, without concern for the traditional constraints of film syntax” (82). I wonder how well this reading fits with American Psycho (or does it fit better with the traditional cinematic relationship between image and sound?). Certainly, there is not too much of a narrative, and many of the scenes within American Psycho could easily be moved around, especially if there were a different narrator or narrative tone. However, because the sound often clashes with the image, it doesn’t seem to really guide the viewer in the appropriate way all of the time. The best guidance seems to come from Bateman’s voiceovers, while the worst seems to come from the diegetic music he plays and enjoys.

Anyway, I found Post-Cinematic Affect to be extremely helpful. It links capital and digital media together in such a way that I’m really excited to apply it to a number of the films on my list!