On Murder Considered as One of the Fine Arts (1827) 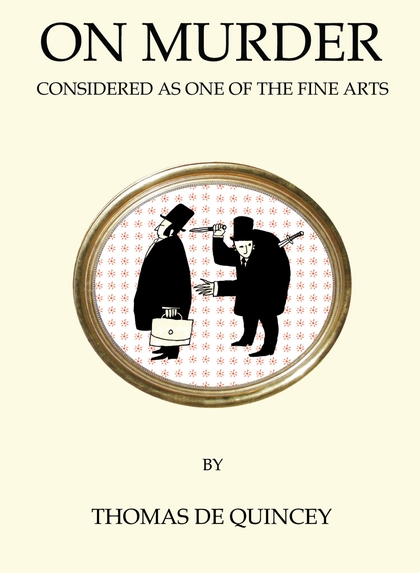 Thomas De Quincey’s essay “On Murder Considered as one of the Fine Arts” was first published in 1827 in Blackwood’s Magazine. It is a satirical and fictional account of an address made to a gentleman’s club focused on murder’s aesthetic value. According to its Wikipedia page, the essay was “enthusiastically received,” causing De Quincey to write numerous sequels.

In the essay, De Quincey references a number of historical personages and even bases one of the murders he describes on a real series of homicides committed by John Williams in 1811 in Ratcliffe Highway, London.

Throughout the essay, De Quincey argues that there he is currently living in a great time for murders, as they are so plenty and, for the most part, masterful works of art. He also explains the difference between assassinations (which must always at least be attempted against great philosophers) and murder, as well as what sort of victims are worthy subjects of the murderous art.

People begin to see that something more goes to the composition of a fine murder than two blockheads to kill and be killed- a knife- a purse- and a dark lane. Design, gentlemen, grouping, light and shade, poetry, sentiment, are now deemed indispensable to attempts of this nature.

He argues that it is morally acceptable to aesthetically appreciate an artful murder because there is nothing that the spectator or interested person can do- we can’t fix a murder or bring the victim back to life, so De Quincey argues that there is no need for virtue. He says we should instead “make the best of a bad matter” and “treat it (the murder) aesthetically.” By doing this, we exercise our “taste” and our understanding of the fine arts rather than our morality and virtue. It’s more pleasing for everyone involved to approach a murder aesthetically rather than morally.

In his “great gallery of murder,” there are a number of examples in which the murder was committed (and in some cases, almost committed) with the motive of robbery. This sort of thinking bleeds into his description of what constitutes an ideal murder victim. Take, for example, his description of Hobbes as a potential subject:

Hobbes, but why, or on what principle, I never could understand, was not murdered. This was a capital oversight of the professional men in the seventeenth century; because in every light he was a fine subject for murder, except, indeed, that he was lean and skinny, for I can prove that he had money, and (what is very funny,) he had no right to make the least resistance…

Age is also a vital aspect of choosing a good murder victim: “how little would be gained to the cause of good taste by murdering an old, arid, and adults metaphysician.” He later also adds that the victim should be “good” so that it it can create pity and fear in the public (for example, if the victim was a robber or was also a murderer, the public wouldn’t care as much for him or her).

He also describes the challenges that may arise for the murderer when dealing with the victim:

Awkward disturbances will arise; people will not submit to have their throats cut quietly; they will run, they will kick, they will bite; and whilst the portrait painter often has to complain of too much torpor in his subject, the artist, in our line, is generally embarrassed by too much animation. At the same time, however disagreeable to the artist, this tendency in murder to excite and irritate the subject, is certainly one of its advantages to the world in general, which we ought not to overlook, since it favors the development of latent talent… the extraordinary leaps which people will take under the influence of fear.

In other words, murder helps the victim to experience their greatest self. Unknown strength and speed suddenly appear in their bodies as they try to escape their fate. Therefore, the murderer, according to De Quincey, provides society with a great benefit.

His description of newspaper readers and public consumption for murder is helpful to remember:

I should say a few words about the principles of murder, not with a view to regulate your practice, but your judgment: as to old women, and the mob of newspaper readers, they are pleased with anything, provided it is bloody enough. But the mind of sensibility requires something more.

Finally, De Quincey takes on the role of an “amateur” murderer/artist who is desirous of improving his craft and is humble regarding his present skills.

On Murder Considered as One of the Fine Arts (1827) by Caitlin Duffy is licensed under a Creative Commons Attribution-ShareAlike 4.0 International License.