The String of Pearls: A Romance was serially published as a penny dreadful in eighteen parts from 1846 to 1847 in Edward Lloyd’s The People’s Periodical and Family Library. Although it is still officially unknown who wrote The String of Pearls, Thomas Peckett Prest is frequently named and James Malcolm Rymer has been the more recent attributed author. In 1850, it was published as a book in an expanded form (732 pages!). 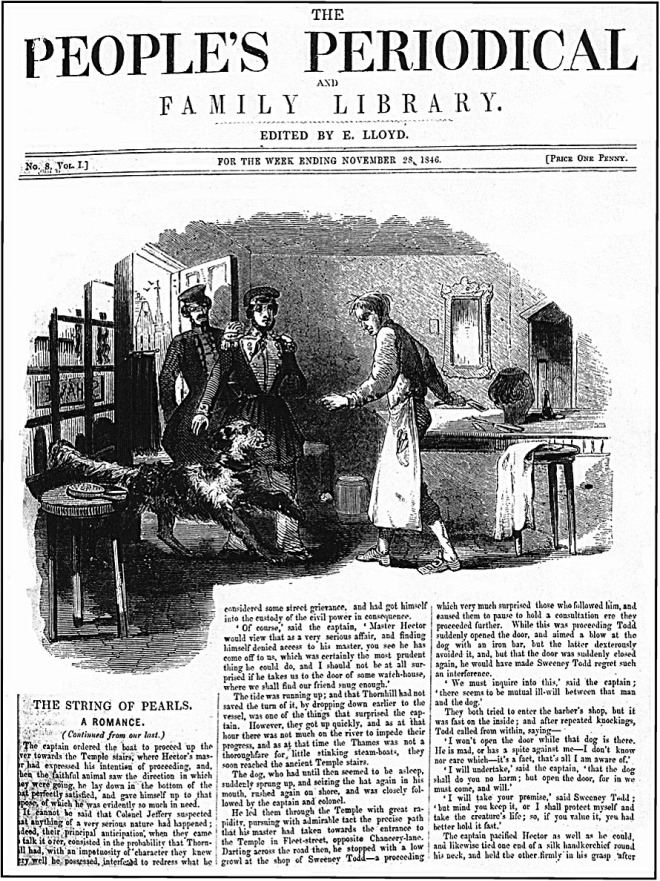 One of the serial publications of The String of Pearls.

I’m glad I chose this to be the penny dreadful representative of my Victorian list. Originally, I chose it simply because I am a mega-fan of Stephen Sondheim’s musical Sweeney Todd. The String of Pearls, however, not only allowed me to once again enjoy the company of all my favorite characters (Sweeney Todd, Tobias Ragg, Mrs. Lovett, Johanna, etc.), it more importantly provided an excellent example of the penny dreadful form. It contains a plethora of gore and violence, as well as a number of horror themes, including cannibalism and murder. It interestingly links the Industrial Revolution and urbanization to Sweeney Todd’s and Mrs. Lovett’s crimes, which allows the story to create a very relevant and realistic horror story for its contemporary readers. It even included real street addresses and one real shop. Fleet Street, in London, is where Sweeney Todd’s fictional barber shop is located. Although his shop is fictional, the street was well-known for being a major industrial center. Mrs. Lovett makes considerable use of machine-labor to produce her pies, but more on that in my notes…

There is some speculation that the author of The String of Pearls may have had some historical influence for the creation of his story. Joseph Fouche, Minister of Police in Paris from 1799 to 1815, may have kept and archive of police records that included a record of a string of murders committed by a Parisian barber in the 1800s who was in league with a nearby pastry cook, who helped the barber get rid of his victims’ bodies by selling them as meat pies. This story however, has never been authenticated.

The Wikipedia page for The String of Pearls notes its potential connection to Dickens.  Charles Dickens’s Martin Chuzzlewit was published two years prior to The String of Pearls and contains a character who is proud of his ability to avoid “the dens of any of those preparers of cannibalic pastry, who are represented in many country legends as doing a lively retail business in the metropolis.” This same character also worries that his others will “begin to be afraid that I have strayed into one of those streets where the countrymen are murdered; and that I have been made into meat pies, or some such horrible thing.”

The story opens in 1785, with Lieutenant Thornhill, who goes missing in London after entering Sweeney Todd’s barber shop on Fleet Street. Thornhill wanted a shave prior to his visit to Johanna Oakley, for purposes of informing her that her lover, Mark Ingestrie, is lost at sea. Thornhill also hoped to deliver a valuable string of pearls to Oakley, which Ingestrie begged of him to give her if he died on their sea voyage after receiving a premonition of danger.

Once missing, Thornhill’s faithful dog Hector alerts Colonel Jeffrey (who enjoyed an “almost romantic” relationship with Thornhill while they were out at sea). Jeffrey visits Johanna secretly and investigates the disappearance of his close friend. Unknown to Jeffrey, Johanna also schemes to discover Thornhill, who she believes to be Ingestrie using a different name. After discussing the matter with her “romantic” female friend (who reads too many romance novels), Johanna decides to assume a disguise and apply to work as an apprentice boy for Todd. Both Jeffrey and Johanna agree that whoever has the string of pearls is most likely the guilty party. They also both hold deep suspicions that Sweeney Todd is guilty.

Meanwhile, Sweeney Todd is managing his business by murdering clients who appear wealthy and unknown who come into his shop. Farmers who are just visiting London to bring their animals to market are of particular value to Todd. He uses a special chair machination that turns underground, dropping the customer to a stone floor of an underground vault 20 feet below. If the drop fails to kill them, Todd happily finishes the job. No matter what, Todd robs the bodies of the valuable goods and money on their person. These bodies are then delivered to Mrs. Lovett through the underground vault and baked into her famous (and cheap) meat pies. Once he comes into ownership of the string of pearls, Todd realizes that he is under suspicion of Thornhill’s disappearance. He struggles to sell the pearls, but eventually gets rid of them by disguising himself as a noble gentleman and giving them to a money lender as collateral for a loan of 8,000 pounds. Once Tobias Ragg, Sweeney Todd’s apprentice, becomes aware of his murders, and even discovers the plethora of jewels, hats, and walking sticks hidden in Sweeney Todd’s forbidden parlor room, Todd is able to place Tobias into Mr. Fogg’s mad house, with the implicit direction to Fogg to make sure that Tobias dies in his sleep within a year.

Once Todd has an opening for a new assistant, Johanna, dressed as a boy, applies and obtains the position. Meanwhile, Colonel Jeffrey has obtained the help of Sir Richard, a local magistrate, to investigate Sweeney Todd. This investigation leads them to St. Dustan’s church, which has been recently plagued by a horrifying stench of death. They discover the remains of hundreds of Todd’s victims hidden in the crypt beneath the church. Sir Richard and Jeffrey somehow connect with the disguised Johanna and Mark Ingestrie, who had been kept prisoner by Mrs. Lovett under her pie shop for the entirety of the story (however, the reader was unaware of his identity until the very end). Ingestrie had seen Johanna meeting in the park with Jeffrey and assumed that she was unfaithful to him. Desperate, he applied to Mrs. Lovett for a job. Mrs. Lovett employed Mark, but the job came with a lot of strings: he was not allowed to leave the vault below the pie shop where the cooking machinery was located, he could only eat pies and drink water, and his only payment was pies and shelter. He eventually learns that not only was he unable to quit his position, but if he stopped working, he would be killed (by Sweeney Todd) in his sleep. He eventually escapes by hiding under the pies he loaded onto the lift that brings the pies up from the cellar into the pie shop. Once in the shop, he jumps up and reveals to Lovett’s customers that the pies “are made of human flesh!” (257).

Just as Mrs. Lovett is about to be arrested, she dies from the poison which Sweeney Todd secretly placed into her brandy bottle. Todd is arrested and eventually hung. Johanna and Mark marry and live happily ever after. 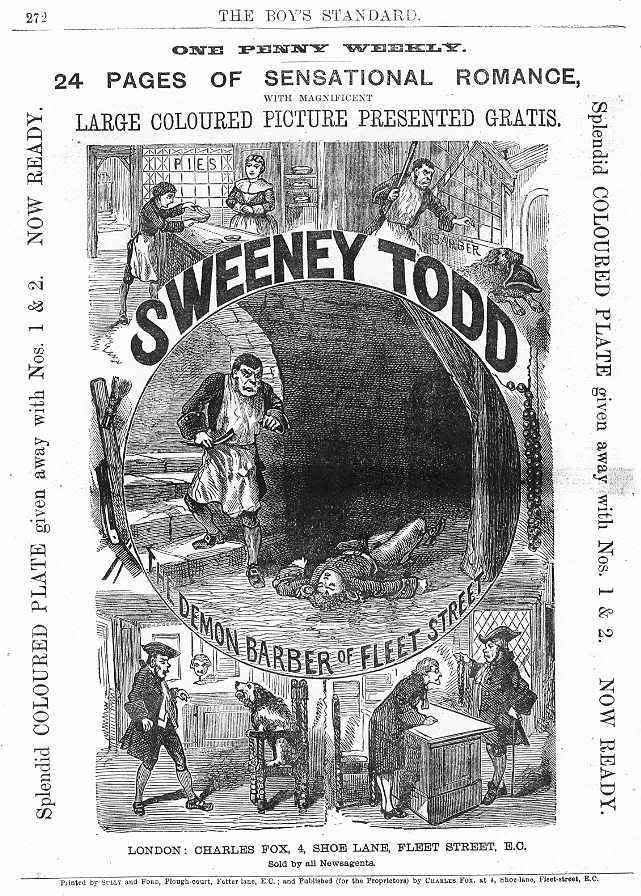 An advertisement for the serial.

…mark me, I will not have you assume such an aspect as you wear when I am not here. You don’t look cheerful, Tobias… Why should you be so anxious?… I shall certainly be under the troublesome necessity of cutting your throat…I desire that you look cheerful and smile, for a gentleman is outside feeling his chin with his hand and thinking he may as well come in and be shaved… (112)

4. Tobias’s full belief of Todd’s murders comes only through his discovery of the litany of possessions within Todd’s parlors. It is only through the victim’s possessions that their murder is presented, as opposed to bodies or body parts (Sir Richard does discover bodily remains, but it is very briefly mentioned).

These articles must have been of great value, and Tobias could not help explaining aloud,- “How could Sweeney Todd come by these articles, except by the murder of their owners?” (133)

5. There is a great sense of surveillance and of being watched throughout the novel. Sweeney Todd wants to retire and move to a different country on the money he gained from the string of pearls, however, he decides that he must stay and remain as normal in order to avoid the suspicion he feels is already present after Jeffrey visited his shop. While in Lovett’s cellar, Mark must continually work or else he will be killed. He doesn’t know how or who, exactly, is watching him, but he is constantly aware of a violent gaze watching him.

6. Cannibalism is a major theme within the story. I find it interesting when gothic and horror literature ascribes cannibalism to a western character or characters. It usually is connected with consumerism in some way, as is the case with cannibalism in The String of Pearls. Mrs. Lovett’s customers don’t know that she is serving them human meat and they deeply love both the delicious taste of the pies, as well as their cheap price. One customer jokes that, “I’d eat my mother, if she was a pork chop, done brown and crisp, and the kidney in it; just fancy it, grilling hot, you know, and just popped on a slice of bread when you are cold and hungry” (241). Her customers also deeply enjoy Lovett’s beauty and her ability to flirt with each person who buys a pie. She presents a full fantasy for the visitors to her shop. Prior to serving times, the customers appear wild and desperate for the pies, almost animal-like and less then human. Put simply, they are ravenous and wild.

Each moment added some new comers to the throng, and at last any strangers who had known nothing of the attractions of Mrs. Lovett’s pie-shop, and had walked down Bell-yard, would have been astonished at the throng of persons there assembled- a throng, that was each moment increasing in density, and becoming more and more urgent and clamorous. (256)

The String of Pearls: A Romance (1846-47) by Caitlin Duffy is licensed under a Creative Commons Attribution-ShareAlike 4.0 International License.