André is a tragic play in five acts written in verse by William Dunlap. It was originally produced at the Park Theatre in New York City by the Old American Theatre Company. Its first performance took place on March 30, 1798. According to the play’s Wikipedia page, it was produced the same year that “a collection of historic documents relating to the case of the title character, Major John André, the British officer who was hanged as a spy on October 2, 1780, for his role in the treason of Benedict Arnold” was published. The play itself is highly fictionalized and romantic despite its foundation in historical events. André, George Washington (“the General”), and Honora Sneyd (a women previously engaged to André, but dead a decade prior to his execution), are the only historical figures within the play. 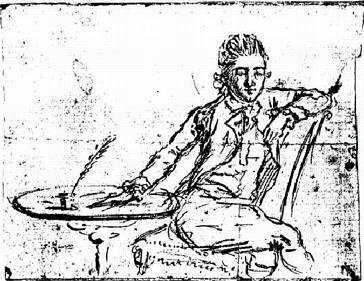 André’s self-portrait, made the night before his death

It is a noteworthy text as it is the first American tragedy written about an American subject, however, it was not very successful during its time on stage due to the controversial sympathetic and heroical depiction of André.

According to the Wikipedia page:

Its lack of popularity stemmed from the controversial lionization of André. Moreover, at opening night, the crowd rose to its feet in anger and indignation when Bland, a soldier in the play, hurled his cockade to the ground at the prospect of André being sentenced to death. The controversy was twofold— not only was Bland losing composure over the fate of a British spy but the cockade (worn by Patriots and then later by the revolutionaries during the French Revolution to emulate their spirit) being tossed to the floor was interpreted by many as Dunlap attacking the American Revolution itself.

Bland has returned to an American encampment, only to discover that his friend, Major André is to be executed by hanging for suspicions of being a British spy. After visiting André in his prison cell, Bland discovers that he was not acting as a spy, but simply but on civilian clothes so as to be able to cross through a line of American soldiers. Bland loves André because his life was once saved by the British major. Bland appeals to the General (Washington) to spare André’s life. Washington feels deep anguish regarding the fact that he must kill a man of so much heroism and virtue, but he feels he must execute the prisoner in order to guarantee the new nation’s future safety. This conviction doubles when he learns that Bland’s father has been kidnapped by British forces. A British officer delivers a note detailing the fact that Bland’s father will be killed if André is executed. Bland’s father has a note delivered to Washington stating that he is happy to spare his life for the good of the country. Honora, André’s beloved, travels across the Atlantic Ocean to find him imprisoned. She also pleads for his release. It turns out that he behaved so recklessly under the false assumption that Honora was unfaithful. The play ends with André’s execution. 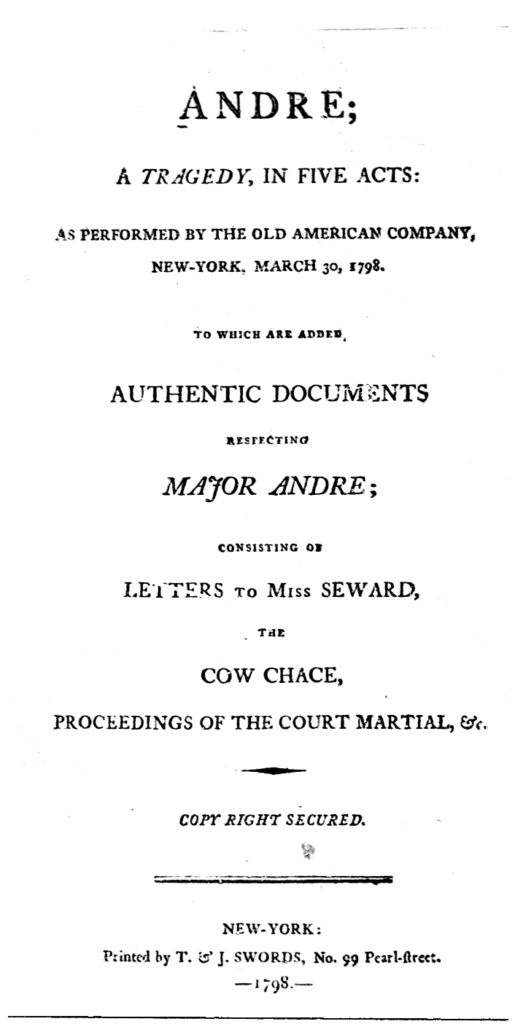 I think that this play can be effectively connected to Castronovo’s Necro Citizenship. It seems to repeatedly ask whether an individual’s life is worth losing in order to protect the larger nation. This is interesting particularly considering nineteenth century American literature’s concern with individualism as a national virtue. André must die simply because of optics. Washington worries that if he is not steadfast in this punishment, America will eventually fall to British powers. Therefore, American and British corpses are required in order to secure the nation.

There is also a argument held between rationality and feeling, which is located within the battle between the commonwealth and the individual. Bland is instructed by Washington at one point to place the nation’s well-being before his own individual cares and feelings. Mrs. Bland, Bland’s mother, despondently cries out to her younger children:

André (1798) by Caitlin Duffy is licensed under a Creative Commons Attribution-ShareAlike 4.0 International License.