Although Royall Tyler’s 1787 The Contrast was advertised as the first truly American play, both written and set in America, it was composed in the tradition of the English Restoration comedies of the earlier 17th century. Tyler used this form effectively to satirize Americans who follow British fashions and indulge in British ‘vices’ and luxuries. The “contrast” referenced in the title is mainly serving to contrast the difference between British and American culture and lifestyles.

It is the first comedy written by an American citizen that was professionally produced. According to its Wikipedia page, The Contrast is most well known for its prologue, “which evaluates home-made versus foreign goods and ideas, and for the introduction of the Yankee of stock character.” 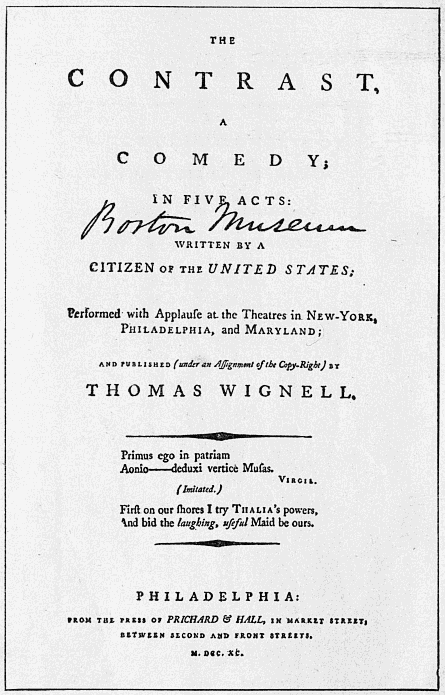 The title page of The Contrast

The plot is comedic, focuses on marriage, and is set in New York City. At the center is Maria Van Rough, who is settled to marry Billy Dimple by an agreement between the two fathers who were business partners prior to Dimple’s father’s death. Unfortunately for Maria, Billy Dimple is a snobbish rake who indulges in European fashions (and even stoops so low as to complain of his own country). Maria is known as a sentimental “prude” who is far too focused on books and morality as opposed to fashion and men. Dimple is also secretly making marriage plans with the coquettish Charlotte Manly and Letitia, unbeknownst to any of the play’s women. When Charlotte’s brother, Colonel Henry Manly, a gentleman patriot, arrives in New York to argue for greater public support of his “brother soldiers.” He continues to wear his military jacket despite the fact that the Revolutionary War is over. When Maria and Manly accidentally meet each other, they both immediately fall in love, but cannot become engaged due to her already established engagement to Dimple. Meanwhile, Dimple reveals to the audience that he is trying to get Maria to break off their relationship so that he can marry Letitia (because she has a fortune to inherit) and keep Charlotte as a mistress. All of this is eventually revealed, along with Dimple’s major gambling losses, which is what causes Van Rough to break off the engagement between Dimple and his daughter (because he only wants a son-in-law who “minds the main chance.”). Finally, Van Rough allows for Maria to marry Manly and Dimple is dishonored, abandoned by both Letitia and Charlotte.

The Contrast (1787) by Caitlin Duffy is licensed under a Creative Commons Attribution-ShareAlike 4.0 International License.