Known as the British counterpart to Psycho, Peeping Tom (1960) absolutely destroyed the career of well-respected director Michael Powell, but has recently enjoyed a newfound reappraisal which lauds it as a masterpiece of cinema for its use of point-of-view shots and color, as well as its placement as (one of) the first slasher films (it was released a mere two weeks prior to Psycho). In an interview, Martin Scorsese told reporters that all you need to do in order to know everything about film is watch Peeping Tom and 8 1/2.

Much like Psycho, Peeping Tom broke a lot of boundaries. It’s known as the first mainstream British film to show female nudity. Unfortunately, Powell didn’t control the film like Hitchcock was able to control Psycho because Peeping Tom was mainly financed by the government. As a result, nothing was kept secret (however, a similar attempt to Hitchcock’s was used in Peeping Tom‘s posters… see the poster below) and the film was quickly pulled from theaters. The public outcry and the ensuing scandal of the film’s violence and depiction of sexuality caused both the destruction of Powell’s career as well as the film’s pull from British cinemas in just five days. It was not shown in US theaters until Martin Scorsese brought it to American cinemas in 1999. 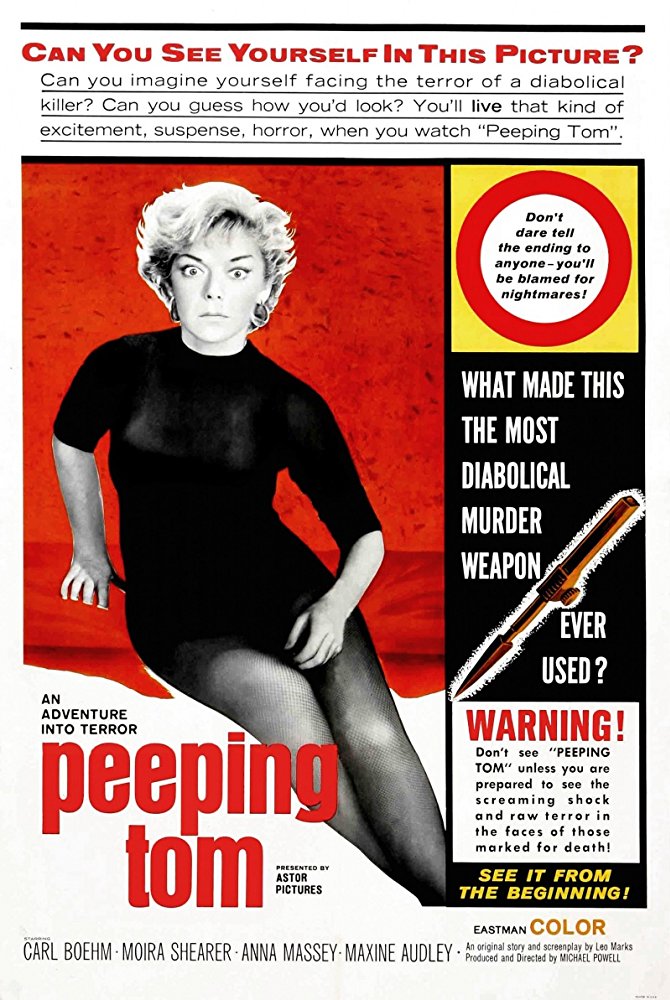 Mark Lewis (Carl Boehm) is a member of a film crew who aspires to become a filmmaker himself. Along with working as a camera man on a major film set, Lewis works part-time photographing soft-porn pin-up photos of women, sold at a local drug store under the counter. He is shy, but houses a dark secret: he compulsively kills women while filming their deaths using a camera rigged with a (PHALLIC) sharp dagger. The moment he sees fear in their face, he cannot prevent himself from killing and filming them. Along with the two (maybe three?) murders he commits during the film, Mark meets and falls in love with his downstairs neighbor, Helen Stephens (Anna Massey), whose blind mother, known as Mrs. Stephens (Maxine Audley), suspects something wrong with Mark. After a particularly tense scene in which Mark stops himself from murdering Mrs. Stephens at the last moment, she tells Mark that he is unable to see or speak to her daughter until he gets help and stops behaving this way. In the meantime, the police are investigating the murder of one of Mark’s victims, a stand-in actress at his job who he killed after hours on set. Her body was discovered inside of a prop suitcase. We also learn, along with Helen, that Mark’s father was psychologist who used Mark as a young child as a guinea pig for his psychological experiments on film and the nervous system. As part of these experiments, Mark was constantly watched, with all rooms in the house wired with cameras and microphones so his father could watch him at all times. All of these pressures ultimately lead to Mark committing suicide. With the police outside his house and Helen crying next to him, he rigs the private cinema room in his apartment to play all of his private videos of murder at once, while he films himself running into his camera dagger- he creates one final masterpiece. 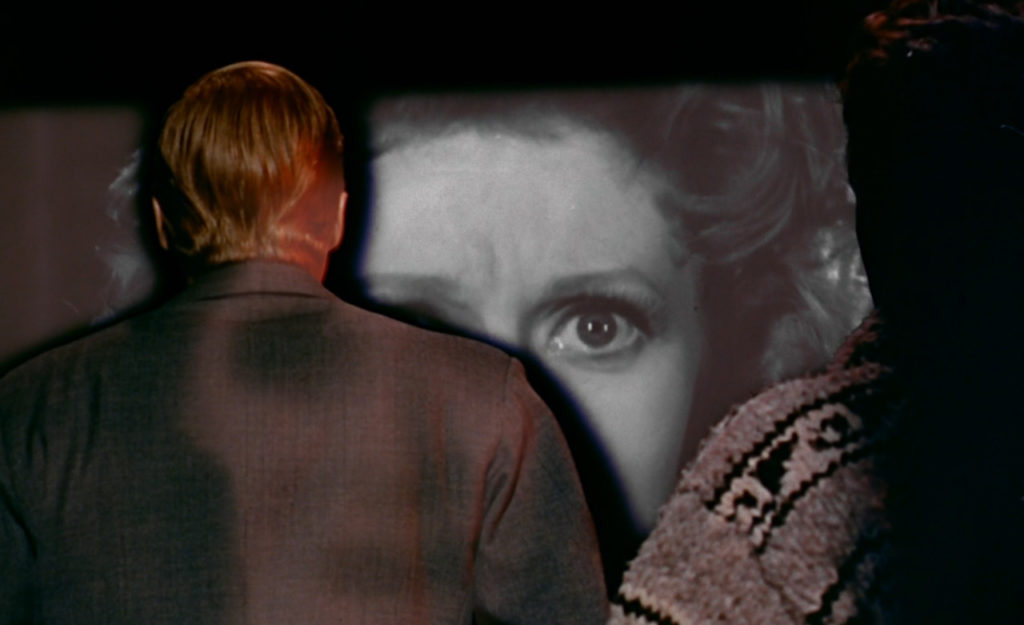 Mark stands in front of one of his films while Mrs. Stephens confronts him 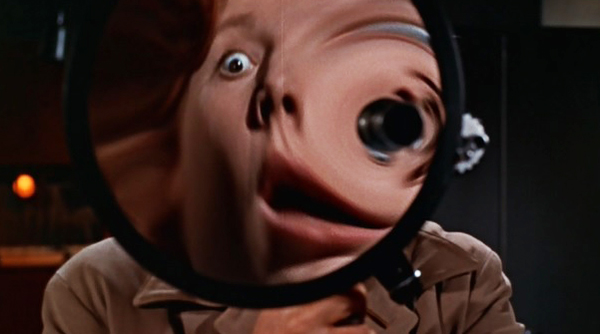