Julie Kristeva’s Powers of Horror is a massively important text for any scholar interested in horror or the abject. Although she does pull a lot on Freudian theory (which I don’t always agree with), she provides plenty of helpful insights into understanding abjection. I particularly enjoyed her connection between the abject and politics and religion. 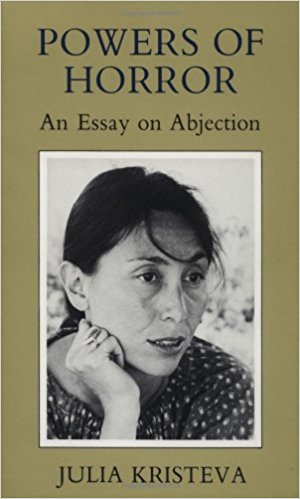 The abject is everything that doesn’t respect borders and that disrupts meaning and identity. Humanity approaches the abject with feelings of disgust, horror, and desire. Ritual, such as through religion or politics, can help to eject the abject from human society (much like the human body ejects waste), however, the human subject can never be completely free from the abject because it helps to define life while threatening to destroy life. Finally, although the abject is constantly present, it must be repelled at all costs because it threatens annihilation. Therefore, abjection is an operation of the human psyche by which the subject creates and maintains identity by repelling or rejecting anything that threatens its boundaries.

A wound with blood and pus, or the sickly acrid smell of sweat, of decay, does not signify death…refuse and corpses show me what I permanently thrust aside in order to live….There, I am at the border of my condition as a living being. (3)

It is not lack of cleanliness or health that causes abjection but what disturbs identity, system, order.What does not respect borders, positions, rules. (4)

…the corpse, the most sickening of wastes, is a border that has encroached upon everything… The corpse, seen without God and outside of science, is the utmost of abjection. It is death infecting life. Abject. It is something rejected from which does one does not part, from which one does not protect oneself as from an object. (3-4)

She later brings up ancient vampire stories as representative of the biblical version of the corpse, the body without a soul. It’s interesting to consider how many bodies without souls emerge within the horror and gothic genres: vampires, zombies, robots, etc. It also helped me to realize how much horror fiction has pulled from ancient and religious sources of abjection. I wonder, too, if the soul without body (i.e.: a ghost) can count within this same level of abjection.

Zombies in Romero’s Night of the Living Dead (1968)

When I am beset by abjection, the twisted braid of affects and thoughts I call by such a name does not have, properly speaking, a definable object. The abject is not an ob-ject facing me, which I name or imagine. Nor is it an ob-jest, an otherness ceaselessly fleeing in a systematic quest of desire. What is abject is not my correlative, which, providing me with someone or something else as support, would allow me to be more or less detached and autonomous. The abject has only one quality of the object- that of being opposed to I. (1)

Again, the abject is where categories and meaning break down. I think this fits really well with Noël Carroll’s definition of the monster. He argues that one way to create a monster is to make sure that it jams categories, for example, living/dead.

I think that Kristeva’s awareness that there is an element of desire within the human approaching the abject. Although the abject represents self-annihilation, it still awakens our curiosity through its meaninglessness and our innate (because we are raised via language) desire to make meaning. This might help work towards an explanation of horror’s seducing quality.

Powers of Horror: An Essay on Abjection (1982) by Caitlin Duffy is licensed under a Creative Commons Attribution-ShareAlike 4.0 International License.