William Mackepeace Thackeray’s 1848 novel Vanity Fair was initially published as a 19-voume monthly serial from 1847-48. Thackeray also drew a number of illustrations to accompany the text. In her correspondence with Thackeray, Charlotte Brontë especially enjoyed these drawings alongside his fiction. Overall, Thackeray’s contemporary critics praised the novel for its portrayal and satirization of human nature and British society. Thackeray himself viewed Vanity Fair as his greatest work and claimed in a letter to his editor at Punch that his work as an author was “as serious as the parson’s own.” Because of this belief, Vanity Fair is meant to be instructive as well as entertaining, which is made clear by the multiple moments within the novel where Thackeray speaks directly to his imagined reader. Some critics, however, did not enjoy the novel’s bleak and gloomy representation of humanity, while others took offense at his depiction of the upper class. To this, Thackeray argued that he viewed people as “abominably foolish and selfish” and that the novel was meant to help readers examine themselves in order to discover and correct their own short-comings. He also responded by noting that his subversive writing was not meant to attack only the rich, but that he meant to critique “every body engaged, engaged in the pursuit of Vanity Fair.”

Perhaps most interesting about Thackeray’s design for Vanity Fair was his purposeful decision to not include a hero, making the novel’s subtitle, “A Novel without a Hero.” All of the characters are deeply flawed, some more than others. Even Dobbin, who is sometimes cited as the novel’s sole moral character, is marred by obsession and melancholy. Thackeray also frames the novel as a puppet show, but later in the novel, it is revealed that the narrator has learned the story through various bits of gossip, making the narrator (and his sources) highly unreliable. Additionally, the novel contains many mistakes, including character’s names changing, ages not meshing correctly, and misspellings (I read somewhere that this is a characteristic of Thackeray’s?). 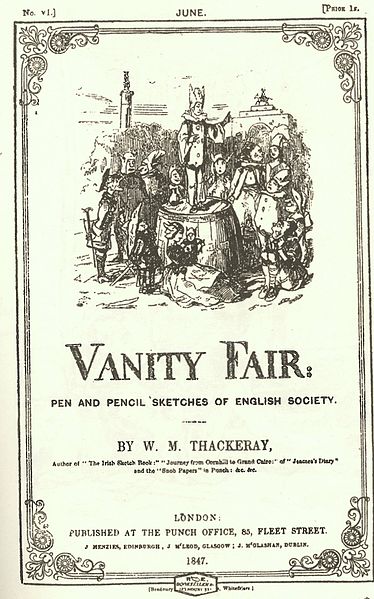 The story follows the exploits of the virtuous yet naive Amelia “Emmy” Sedley and the scheming Rebecca “Becky” Sharp after they depart from school and begin their adult lives.

Emmy is from a wealthy London family and has been set to marry George Osborne for years. However, when her family goes bankrupt, Mr. Osborne, George’s father, refuses the marriage. Urged on by Dobbin, Emmy’s secret admirer and George’s lifelong friend, the two secretly elope and George is cut from his father’s will. George dies in battle during the Napoleonic Wars and Emmy is left alone and pregnant. After her son, George, is born, Mr. Osborne makes a bargain to raise George himself and, in exchange, he will pay Emmy in monthly installments, however, he continues to refuse to see her or acknowledge her place as his daughter-in-law. With no other way to take care of herself, her son, and her two aging and impoverished parents, Emmy accepts the deal. Dobbin returns to London and seeks to change Mr. Osborne’s opinion of Emmy. He succeeds, but Mr. Osborne dies immediately after, leaving a considerable sum to Emmy and George. Emmy continues to refuse Dobbin’s hand in marriage, claiming she still loves her deceased husband, until Dobbin, after a major fight, leaves Emmy and re-joins the military. Emmy writes him a letter, after being urged by Becky, the cause of the fight, begging him to return. He does and they get married. The ending is not very happy, however. Emmy sadly accepts the fact that Dobbin loves their daughter more than he loves her.

After school, Becky attempts to court Emmy’s brother Jos, but fails. She is placed as a governess at the Crawley estate so that she can tutor two of their young daughters. Scheming Becky manages to become a favorite of the aging yet lively Mrs. Crawley. As Mrs. Crawley is about to die, the question of her will is a major one amongst her family members, many of whom are very jealous of Becky’s relationship with Mrs. Crawley. Becky secretly elopes with Mrs. Crawley’s other favorite, Rawdon Crawley, but is later proposed to by Sir Pitt, who she is forced to refuse. When their elopement becomes known, Mrs. Crawley orders Becky and Rawdon out of her presence, and removes Rawdon from her will completely. Throughout their marriage, Rawdon is constantly impressed by Becky’s ability to network and increase their worth in the eyes of society, despite not having (or being able) to pay for a single thing. Rawdon, in the mean time, has a bad gambling problem. They have a son named Rawdon, who Becky ignores, but Rawdon, Sr. loves. This difference in feeling causes Rawdon to feel estranged from his wife. Becky eventually develops a questionable relationship with Lord Steyne. After one of Steyne’s parties, Rawdon is arrested because of his outstanding debts and imprisoned. Becky claims that she is too sick to get him out. After Rawdon is released with the help of his sister-in-law Lady Jane, Rawdon discovers Becky entertaining Lord Steyne alone, not sick at all! Rawdon physically attacks Lord Steyne and ransack’s Becky’s possessions, finding a large amount of bank notes that he knew nothing about, some of which are signed by Steyne. He leaves, and begins to set up a duel with Steyne, but when Steyne offers him an impressive position as Governor of Coventry Island, Rawdon agrees to not duel. Becky is left to roam the continent alone. In each hotel and inn, when she is discovered to be of bad reputation, she is forced to leave. Eventually she meets up with Emmy and her group. Becky seduces Jos once more, leaching off of him until Jos mysteriously dies of what appears to be poison. Jos had recently taken out insurance on his life, guaranteeing Becky to receive the insurance money upon his death.

George’s grandfather gave the boy a couple of sovereigns for that feat, and promised to reward him further for every boy above his own size and age whom he whopped in a similar manner. It is difficult to say what good the old man saw in these combats; he had a vague notion that quarreling made boys hardy. and that tyranny was a useful accomplishment for them to learn. English youth have been so educated time out of mind, and we have hundreds thousands of apologists and admirers of injustice, misery, and brutality, as perpetuated among children. (657)

‘You see,’ said Old Osborne to George, ‘what comes of merit and industry, and judicious speculations, and that. Look at me and my banker’s account. Look at your poor grandfather Medley and his failure. And yet he was a better man than I was, this day twenty years- a better man, I should say, by ten thousand pounds.’ (712)

‘…I know what your heart is capable of: it can cling faithfully to a recollection, and cherish a fancy; but it can’t feel such an attachment as mine deserves to mate with, and such as I would have won from a woman more generous than you. No, you are not worthy of the love which I have devoted to you. I knew all along that the prize I had set my life on was not worth the winning; that I was a fool, with fond fancies, too, bartering away my all of truth and ardor against your little feeble remnant of love. I will bargain no more. I withdraw…’ (787)

‘It’s a mercy he did not bring us over a black daughter-in-law, my dear. But, mark my words, the first woman who fishes for him, hooks him… The girl’s a white face at any rate.’ (37)

When Rawdon is set to become the governor of Coventry Island, a part of the British Empire, he is warned that the hot climate is known to cause the early death of British colonists. Finally, there are a number of black and Indian characters present as servants, as well as one Miss. Schwartz who is half black, extremely wealthy and beautiful, and educated at the same school where Emmy attended and Becky worked.

Reform regarding voting laws and gaining seats in Parliament are briefly referenced. Sir Pitt, for example, supports a pre-reform system in which barely populated land received representation in Parliament, while industrial areas basically had no representation.