Carrie (1976), directed by Brian De Palma, was the first movie to be made of a Stephen King novel. It was also King’s first book ,which he wrote while working at an industrial laundry for $1.60 an hour. According to King, he was only paid $2,500 for the rights to the story, however, he claims that he has no regrets because he believes that this was the best made film of any of his fiction.  Additionally, the box office success helped Stephen King to become a household name. Carrie made over $33 million in the US from a $1.8 million investment.

While casting for the film, Brian De Palma held a joint audition with George Lucas for both Carrie as well as Star Wars: A New Hope. A number of actors who were ultimately cast for Carrie attended the audition for Star Wars.

During the filming of Carrie, Steven Spielberg often visited the set upon invitation by Brian De Palma who assured Spielberg that there were “a lot of cute girls” in his cast. According to actor P.J. Soles, Spielberg asked out most of the women on set and wound up marrying Amy Irving, who played Sue, from 1985-89.

The final moment of Carrie’s hand stretching out of the grave, reaching for Sue in her dream was made as an homage to the final moment of Deliverance (1972).This shot was once more copied in Friday the 13th (1980).

There are a few references to Psycho within the film. For example, the screeching music cue that accompanies Carrie’s powers throughout the film is the same as the screeching violins in Psycho‘s shower scene. Additionally, the high school that Carrie attends in the film is called Bates High School. 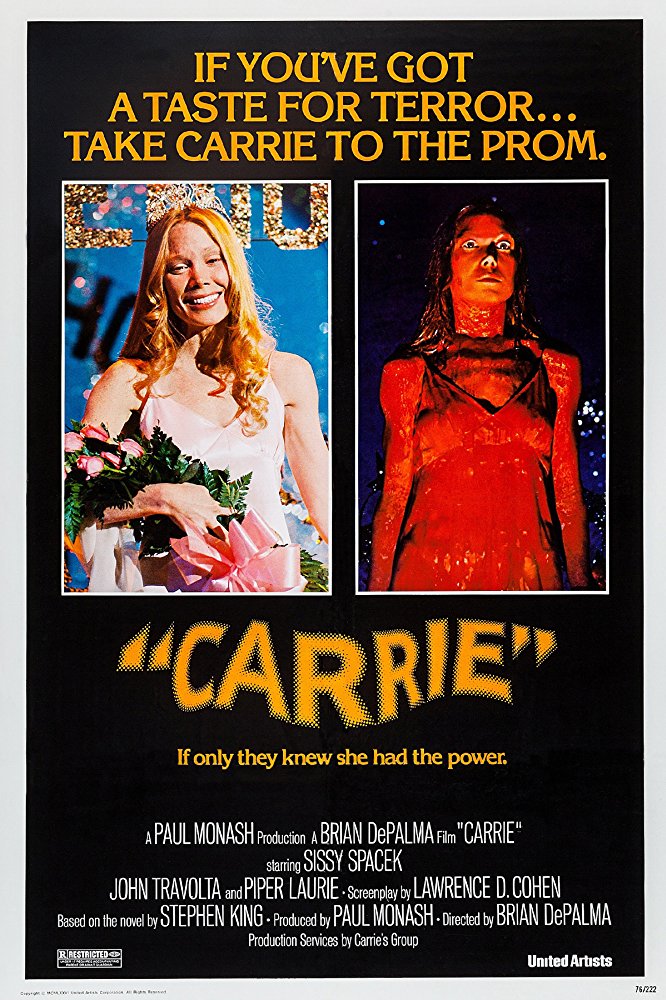 Carrie White (Sissy Spacek), a bullied teenage outsider, is terrified when she gets her first period while at her school’s locker room following gym class. She didn’t know what it was and assumed she was dying. After pleading with the other girls for help, she is met with calls of “Plug it up!” and tampons and pads are thrown at her. The gym teacher, Miss Collins (Betty Buckley), furious with the girls’  behavior, punishes them with multiple after-school gym detentions, with the threat of not being allowed to attend prom if they skip these detention sessions. One of the girls involved, Sue Snell (Amy Irving), feels badly for the way she and the others treated Carrie. In order to make amends, she asks her boyfriend Tommy (William Katt), a popular and athletic student, to take Carrie to prom. Tommy reluctantly agrees. Meanwhile, Carrie is discovering that she has suddenly acquired telekinetic powers after the locker room incident. After Tommy invites her to prom, Carrie, assuming it’s just another joke at her expense, initially declines, however after some encouragement from Miss Collins and Tommy, agrees. Unfortunately, Carrie’s mother, Margaret White (Piper Laurie) is a religious fanatic who grows angry at anything involving Carrie’s sexuality. For example, when she learns that Carrie received her first period, she locks Carrie in a tiny prayer closet for hours. She tells Carrie that she isn’t allowed to go to prom or date, however, with her newfound power, Carrie tells her mother that she’s going no matter what. One of the girls who made fun of Carrie in the locker room, Chris (Nancy Allen), refuses to attend the gym detention, instead accepting the harsher punishment of not being allowed to attend prom. She, however, has other plans. In order to seek her revenge on Carrie, who she blames for her lack of prom, Chris hires her boyfriend Billy (John Travolta) to help her execute a prank. They slaughter a pig and collect its blood. On prom night, Carrie is finally happy and describes her night as “a dream.” Even Tommy seems to be enjoying his time with Carrie, dancing with and kissing her. As part of Chris’s prank, Carrie and Tommy are elected prom queen and king, however, when she gets on to the stage, a hidden bucket of pig’s blood is poured all over her. After seeing everyone in the crowd, including Miss Collins, laughing at her, Carrie realizes that her mother (who warned that “they’re all gonna laugh at you”) was right. Carrie exacts her revenge, using her telekinetic powers to lock the gym doors, spray prom attendees with heavy-duty hoses, and start a fire in the gym. It’s assumed that everyone (including Tommy) besides Carrie dies who was present in the gym. Carrie also kills Chris and Billy by turning their car over and making it explode after she catches them trying to hit her with the car. Finally, she returns home, takes a bath, and seeks out her mother. Crying, she tells her mother that she was right all along and asks for forgiveness. Mrs. White says she forgives Carrie, saying that it was her own fault for not killing her when she was first born, since she was created out of sin. Mrs. White then stabs Carrie in the back while they are hugging. Carrie then turns on her mother, ultimately stabbing her multiple times, so that she is stuck to a doorway in the same position as the Jesus figurine is in the dreaded prayer closet. Carrie then causes the whole house to break apart and sink underground, along with herself and her mother. Sue, the sole survivor, wakes up from a dream in which Carrie’s hand rises from the grave and grabs at Sue. Sue is screaming, raving and crying (it seems like she has some form of PTSD), while her mother tries to calm her down. 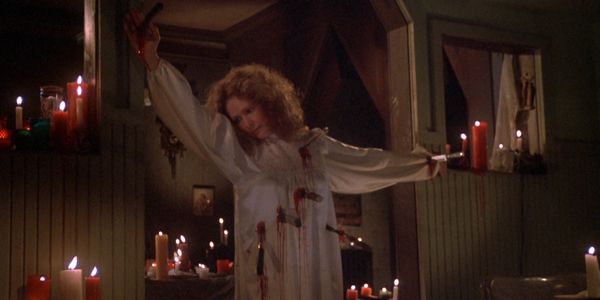 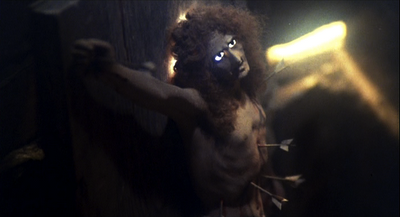 The Jesus statue in the White household prayer closet 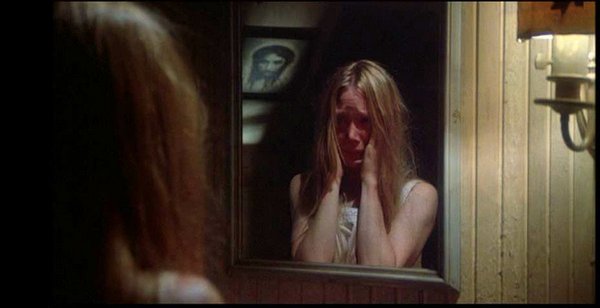 Carrie in her bedroom.

Carrie (1976) by Caitlin Duffy is licensed under a Creative Commons Attribution-ShareAlike 4.0 International License.