John Boorman’s Deliverance (1972) has become a major cultural American touchstone. Although it may be more of a thriller than a horror, you can find countless references and homages to Deliverance in many a modern eco-horror film. For example, The Blair Witch Project and The Ritual (though not American) certainly could not have existed in the way they do without Deliverance coming first.

Unlike many of the films on my list, Deliverance received great critical success upon its release, winning three Academy Award and five Golden Globe nominations. In 2008, it was selected to be preserved in the US National Film Registry by the Library of Congress for being “culturally, historically, or aesthetically significant.” Roger Ebert, however hated the movie, claiming that it had no real purpose or theme:

Dickey, who wrote the original novel and the screenplay, lards this plot with a lot of significance – universal, local, whatever happens to be on the market. He is clearly under the impression that he is telling us something about the nature of man, and particularly civilized man’s ability to survive primitive challenges… But I don’t think it works that way… What the movie totally fails at, however, is its attempt to make some kind of significant statement about its action… What James Dickey has given us here is a fantasy about violence, not a realistic consideration of it… It’s possible to consider civilized men in a confrontation with the wilderness without throwing in rapes, cowboy-and-Indian stunts and pure exploitative sensationalism.

Deliverance was also a major box office hit, becoming the fifth-highest grossing film of 1972, earning a domestic total of over $46 million on a $2 million budget.

In order to keep that budget small, the production accepted a number of financial short-cuts. For example, the film wasn’t insured and the actors did their own stunts. This is wild, since Jon Voight had to climb up an incredibly tall and steep cliff, and the four major actors had to canoe in treacherous waters, and purposefully fall down a set of rocky rapids. In fact, in the capsizing scene, Burt Reynolds broke his coccyx (tailbone). When Ned Beatty was thrown overboard and sucked under by a whirlpool, a production assistant had to dive in after him, but they didn’t surface for thirty seconds. Supposedly, Beatty claimed that, while he was under water, his first thought was, “how will John finish the film without me? And my second thought was, I bet the bastard will find a way!”

In another (far more safer) effort to cut costs, local residents were cast in the roles of the rural locals of the film. Many of these people were actually illiterate.

This is the film that shot Burt Reynolds (Lewis) to stardom. Reynolds views Deliverance as “the best film” he’s ever been in.

The movie was shot primarily on the Chattooga River, which divides South Carolina and Georgia. Additional scenes were shot on the Tallulah Gorge in Georgia, Salem, South Carolina, and Sylva, North Carolina. Shots of the town which did not call for the actors to be present were shot in Monaca, Pennsylvania.

Whether the film caused an increase or decrease in similar camping/canoeing adventures is in contention. On the film’s IMDB trivia page, it both says that,

In the year after the film’s release, more than thirty people drowned in the Chattooga River while trying to replicate the characters’ adventures. 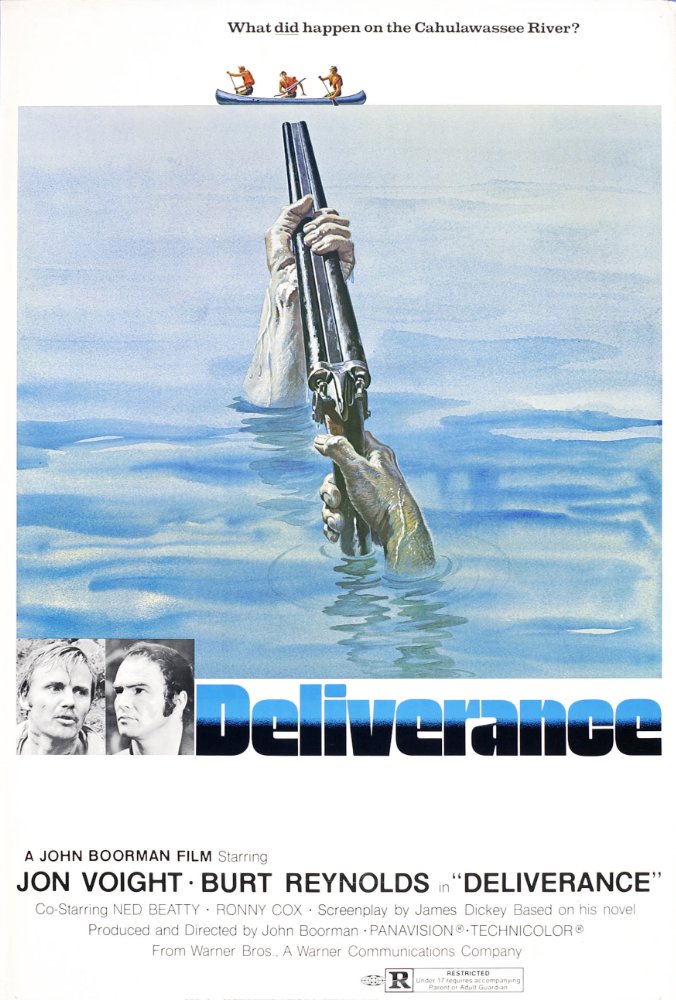 A group of middle-class male friends from Atlanta leave their wives and families behind to embark upon a canoeing trip along the Cahulawassee River in Northern Georgia. They chose this river because it is about to be destroyed due to the building of a dam on the river, which will inevitably flood the surrounding area. Before getting on the water, they first stop at a local gas station/general store to find hired workers to drive their cars to their destination point at the end of the river. The four men act superior to the rural locals, although Drew (Ronny Cox) enjoys a duet of “Dueling Banjos” with a mute boy named Lonnie (Billy Redden). On their trip, the men hunt fish using top-of-the-line arrows (Ed also tries hunting deer, but fails due to his “buck fever”) and carefully navigate their two canoes through rocky rapids. Their trip takes a dark turn on the second day during a pit stop along the river. The two men in one of the canoes, Ed (Jon Voight) and Bobby (Ned Beatty) encounter two backwoods men watching them through the trees. Ed and Bobby assume that these two men are nervous to be found out in the woods due to a hidden whiskey distillery and promise that they won’t tell anyone what they saw. The two men, armed with a knife and gun, laugh at the clearly nervous urban outsiders, tie Ed to a tree by his neck using his belt , and force Bobby to strip down to his underwear. One of the men rapes Bobby while exclaiming that he looks just like a pig, instructing him to “squeal like a piggy!” throughout the assault. After this, a gun is leveled at Ed’s face and it seems like they’re about to force him to perform oral sex (the man holding the gun notes his “pretty mouth”), but Lewis (Burt Reynolds) and Drew appear.

Lewis shoots an arrow through the man who raped Bobby, and Ed is able to wrest the gun out of the other man’s hands during the chaos. The man with the arrow wound dies, but the other man manages to run away. The four men debate what is to be done with the dead body: do they bring it with them to turn it over to the cops, or do they hide it out in the woods? All but Drew agree to bury it in the woods, given the fact that a dead body would mean a local trial in which the jury would consist of this man’s peers. After burying both the body and the gun, they return to their canoes, but Drew refuses to put on a life jacket, and throws himself into the water. This causes both canoes to capsize, and, as they go through a particularly treacherously rocky stretch, Lewis emerges with a major wound. They are unable to find Drew’s body, one canoe is completely destroyed, and seriously injured Lewis claims that Drew was shot by the second local. Lewis also states that this man is still tracking them. In order to stop this man from hunting them, Ed climbs up a cliff and shoots a man who looks like the local man with a bow and arrow. Throughout the rest of the film, they are unsure whether or not this was the right man. The three remaining men hide this body in the water after loading it with rocks, and continue down the river. They come across Drew’s body and decide to also hide him under the water. When they finally reach their destination, the three men agree to tell authorities that there were only three of them to begin with in one canoe, and that Lewis was hurt near the end of the river (to prevent a search of upper section of the river where they hid the bodies). They are taken to a hospital and are cared for, but Lewis is told that his leg may need to be amputated. Local cops are deeply suspicious because one of their brothers-in-law went missing recently after hunting near the river. Before Bobby and Ed leave the town, the sheriff warns them to never return. 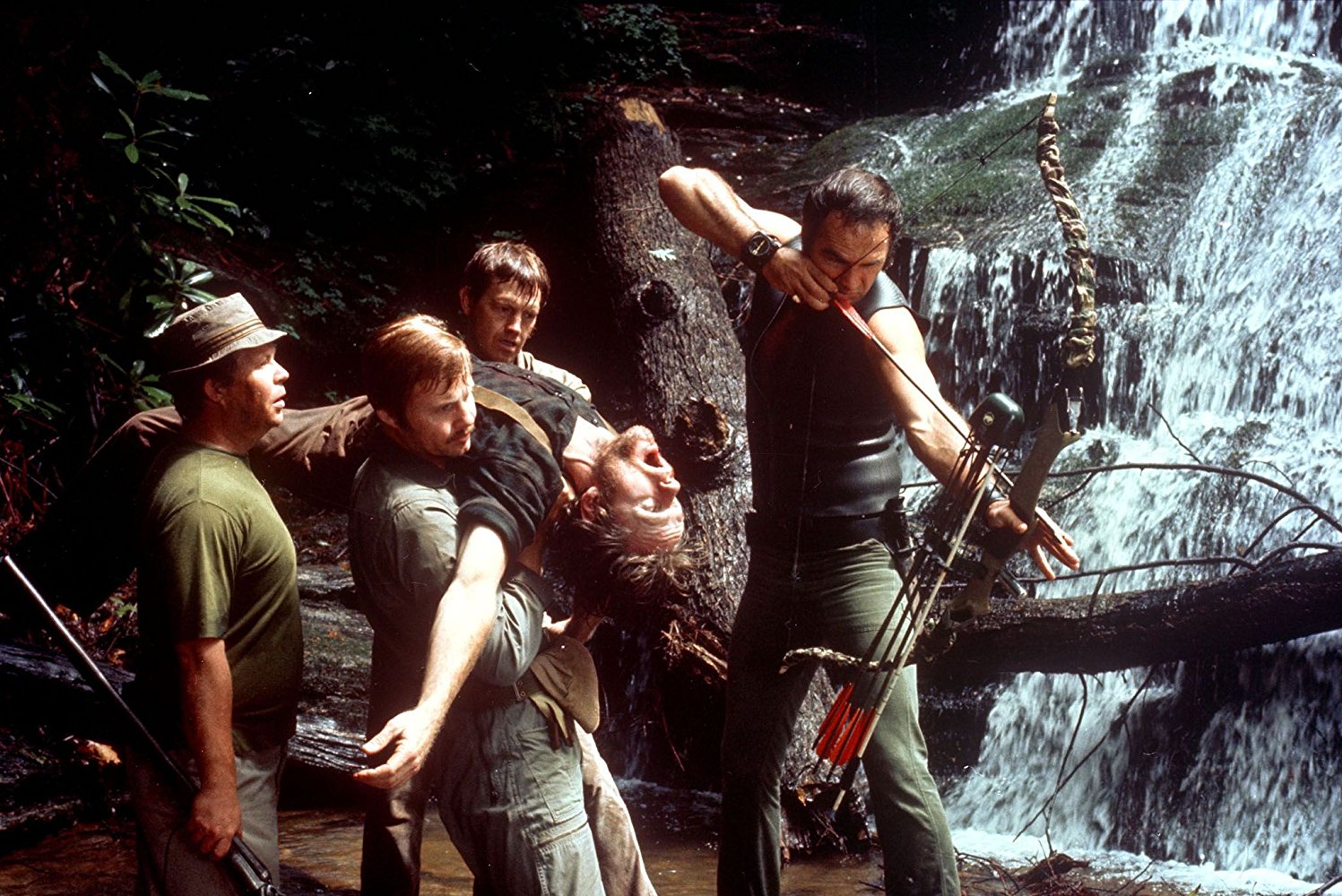 The quartet after killing their first local. 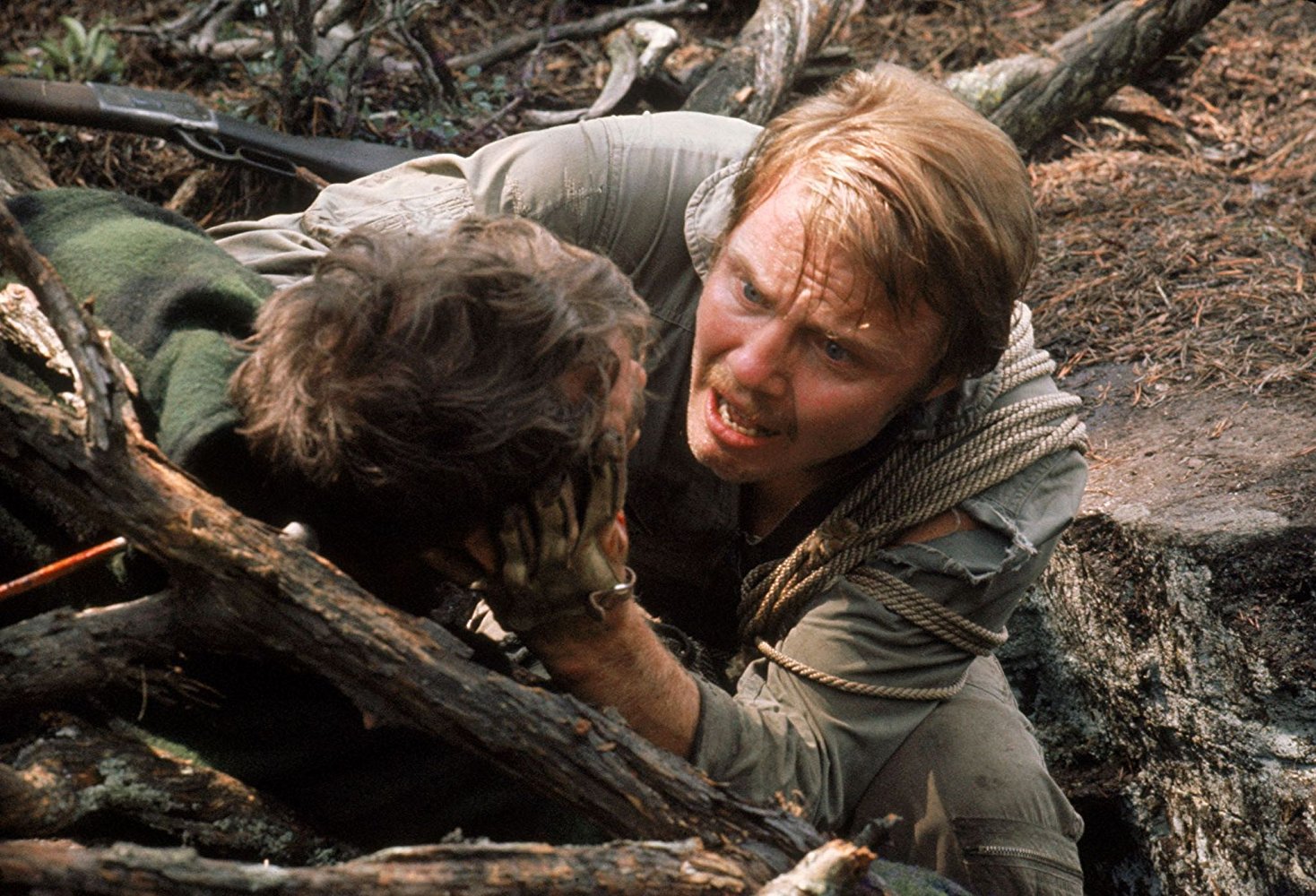 Did Ed shoot the right person?

Deliverance (1972) by Caitlin Duffy is licensed under a Creative Commons Attribution-ShareAlike 4.0 International License.