According to the publisher’s site, this book represents “the first study of how the Gothic engages with ecorcritical ideas.”  Ecogothic (2013) is a collection of essays edited by Andrew Smith and William Hughes that serve to begin a critical discussion surrounding the intersections between ecocriticism and the gothic. Although I’ve read a number of these essays, for my comprehensive exam list, I decided to focus solely on the introduction,written by Smith and Hughes. 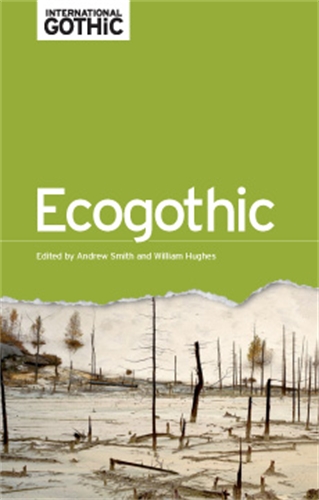 It is incredibly surprising, given romanticism’s focus on nature, that ecocritical approaches have not yet been used in tandem with gothic theory and texts. Ecocriticism has a long history of exploring images of the apocalyptic, catastrophic, and the wilderness, all of which are also central to the gothic.  By using the gothic, scholars can gain a better sense of cultural constructions of nature, as well as the anxieties which color humanity’s relationship to the natural environment.

However, these (American) images are surrounded by an aura of menace, whereas in Frankenstein there is a contrary feeling of fatigued, and so failed, revenge. The landscape in the North American context seems to invite mastery through images of the frontier…(10)

The fact that the American landscape presented early European settlers with a much greater sense of wildness than that of the human-dominated and controlled Old World can explain this sharp difference. The monster in Frankenstein is repeatedly forced out of human communities and finds himself in an Arctic wasteland, just as Walton expresses his absolute isolation and loneliness away from the civilized classes while on his sea voyage. This sort of blankness is truly nothingness, a sort of death and collapse, whereas American nature is often crafted as something malevolent and vengeful in our national gothic fiction. The white whale in Moby Dick, for example, may be characterized for its blank coloring, but it is able to destroy the megalomaniac Ahab who tries to control and dominate it.

Debates about climate change and environmental damage have been key issues on most industrialized countries’ political agendas for some time. These issues have helped shape the direction and application of ecocritical languages. The Gothic seems to be the form which is well placed to capture these anxieties and provides a culturally significant point of contact between literary criticism, ecocritical theory, and political process. While the origins of this ecoGothic can be traced back to Romanticism the growth in environmental awareness has become a significant development. (5)

Discussing Kevin Corstorphine’s contribution to the volume: …the concept of nature gains importance only through human perspective, and that a critical examination of the representation of nature in fiction is crucial to an understanding of our relationship with it. (10)

Introduction to Ecogothic (2013) by Caitlin Duffy is licensed under a Creative Commons Attribution-ShareAlike 4.0 International License.