Selections from The Rural Gothic in American Popular Culture: Backwoods Horror and Terror in the Wilderness (2013)

For this text, I chose to focus on three separate chapters:  “Introduction: We’re Not Out of the Woods Yet,”  “Backwoods Nightmares: The Rural Poor as Monstrous Other,” and “’Why Wouldn’t the Wilderness Fight Us?’ American Eco-Horror and the Apocalypse.” After reading these chapters, however, I am interested in reading the remaining three, as I think they may be super helpful to read in tandem with my 19th-century American list. 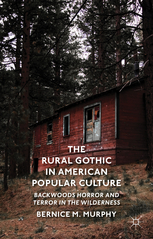 1. “Introduction: We’re Not Out of the Woods Yet”

The initial reaction of the first European settlers in America has continued to deeply color American depictions of the wilderness. The sub-genre of the rural gothic contains numerous sources of anxiety: category breakdowns, America’s racial past and its current racial tensions, human degeneration and hostile humans, a malevolent nature. There are two major types of rural gothic narratives: (1) Settled person(s) menaced by mobile/chaotic outsiders (ie: Charles Brockden Brown’s Wieland (1798) or Truman Capote’s In Cold Blood (1965)) 1; (2) People who have settled too long in the backwoods or wilderness are monstrous and attack civilized individuals who are just “passing through” the area (i.e.: Deliverance, The Texas Chainsaw Massacre, Cabin Fever).

‘Wilderness’ is, therefore, according to this definition, a place defined by the fact that humans are absent or present only on a transitory basis. It is a classification which owes much to the sea change in attitudes towards the natural landscape which took place in the late nineteenth century, when figures such as John Muir and Henry David Thoreau encouraged Americans to see the ‘wilderness; in a very different light from earlier conceptions of the space: as a restorative and regenerative space that provided a refuge from the pressures and materialism of so-called ‘civilization.’ (6)

Not only did the ‘American’ view of nature change across time, from the Puritans to the 19th century transcendentalist view, but it also varied across racial and cultural divides.

Then there is the fact that, as Roderick Nash observes in Wilderness and the American Mind (1967), ‘only for the white man was nature a wilderness.’ The long-lasting ramifications of this difference between the way in which the settlers and the Indian tribes viewed the natural world forms a key strand of this study. (7)

This constant shifting and changing of categories allows these rural narratives to naturally take on a gothic tone because of the genre’s focus on this theme. Additionally, the term “gothic” is extremely difficult to pin down and define, especially “American Gothic,” as Theresa Goddu, among others, have helpfully explained.

2. “Backwoods Nightmares: The Rural Poor as Monstrous Other”

The backwoods horror film is a popular American sub-genre that features a collection of white trash locals that are monstrous and polluted as a result of their residence in the country (typically the American south) which is represented as a site of terror. This depiction of the white rural poor as monstrous is a result of historical memory, the racial past, and the national prevalence of capitalism. There are two major types of backwoods horror: (1)Angry working class rural men go rogue and violently assault middle class outsiders. When the protagonists are men, this causes the narrative to at least partly focus on urban and rural versions of masculinity; (2) Monstrous, degenerate, savage families (typically cannibals) terrorize a group of middle class outsiders. This is a more common form than Type 1.

…backwoods killers like nothing better than to hoard junk that will then be strategically placed around their home in order to create an atmosphere of maximum creepiness…This focus upon the pack-rat sensibilities of the backwoods aggressor emphasizes the fact that mainstream American culture appears to find something inherently suspicious about the self-sufficiency of those who make their own belongings rather than buy mass-produced products in a store like ‘normal’ folks. The ‘make do and mend’ philosophy of those who recycle or salvage what others would throw out, though seen as admirable in narratives which emphasize ‘positive rurality’ (such as The Hunger Games trilogy and Walden) are here further markers of deviancy. (153)

I think this mistrust of self-sufficiency is fascinating, especially given Carol Clover’s representation of the final girl as resourceful and self-sufficient. Also, these backwoods horror films typically feature a final girl who also manages to survive the film by intelligently using the tools and people around her quickly.

3. ‘Why Wouldn’t the Wilderness Fight Us?’ American Eco-Horror and the Apocalypse

Although the prevalent ecohorror films of the 1970’s typically featured a threat of a single animal against a small town, ecohorror films of the post-2000 era are vastly different at least in part because of the public’s awareness of climate change. These horror films feature a violent and changed nature as a result of human arrogance at a world-wide scale. The revolt of nature here is not a single species, but is rather a chaotic and apocalyptic revenge. These narratives often take the form of post-apocolyptic tales in which the American landscape returns to the wilderness it was prior to European invasion.

‘To drill or not to drill?… dramatizes a specifically American environmental conundrum- whether or not to prioritize the nation’s ever-growing energy needs, or preserve the last relatively unpolluted natural landscape. (195)

Selections from The Rural Gothic in American Popular Culture: Backwoods Horror and Terror in the Wilderness (2013) by Caitlin Duffy is licensed under a Creative Commons Attribution-ShareAlike 4.0 International License.