Anne Brontë’s epistolary novel The Tenant of Wildfell Hall (1848) was the most shocking of all the Brontës’ works and was published under Anne’s pseudonym Acton Bell. It was her second and final novel, however, many contemporary critics believed that Tenant, as well as all of the other Brontë novels were written by a single male author. It achieved almost immediate success, however, its depiction of Helen Lawrence Huntington slamming her bedroom door in her husband’s face and eventually leaving his home with their child under an assumed name was controversial and shocking to its contemporary readers and critics. One review that is particularly telling of the mixture of shock and esteem directed towards the novel comes from Charles Kingsley in his review for Fraser’s Magazine:

A people’s novel of a very different school is The Tenant of Wildfell Hall. It is, taken altogether, a powerful and an interesting book. Not that it is a pleasant book to read, nor, as we fancy, has it been a pleasant book to write; still less has it been a pleasant training which could teach an author such awful facts, or give courage to write them. The fault of the book is coarseness–not merely that coarseness of subject which will be the stumbling-block of most readers, and which makes it utterly unfit to be put into the hands of girls…[English] society owes thanks, not sneers, to those who dare to shew her the image of her own ugly, hypocritical visage.

After Anne’s death, Charlotte prevented its re-publication, however, it seems that nobody presently is certain exactly why this happened: whether out of jealousy of the success of her sister’s novel or to prevent further criticism of her dead sibling’s work. Despite Charlotte’s wishes, the novel was reprinted, however it was released in a rather mutilated form, with various sentences and entire chapters missing, as a one-volume edition in 1854. Publications of Tenant following this version often take on this form despite claiming to be the full version of the novel. 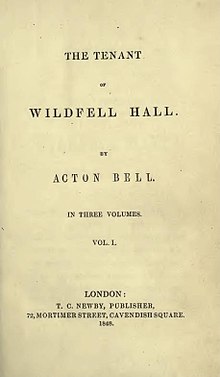 The novel takes the form of a series of letters from Gilbert Markham to his friend and brother-in-law, J. Halford. Through these letters, Markham attempts to tell the story of how he and his wife first met and were married. A secretive young widow and her son, under the names Helen and Arthur Graham, arrive at Wildfell Hall with a servant, Rachel. Previous to her arrival, Wildfell Hall was a gloomy mansion which was deserted for many years. Partly because of Helen’s desire to live quietly and in seclusion, she becomes the victim of local gossip and slander. Gilbert refuses to believe these stories, and grows cold towards anyone who markets them, including Eliza Millward, the daughter of the local vicar, with whom Gilbert had previously appeared to court. He falls in love instead with Helen, a passion which causes him to attack Frederick Lawrence with a whip after he spied the two together late at night in Wildfell Hall (however we later learn that Lawrence is Helen’s brother and landlord). After confronting Helen about this scene, Gilbert is handed a collection of papers from her diary. By including these pages in his letters to Halford, the middle section of the novel becomes narrated instead by Helen. In her diary, Helen describes her courtship with and subsequent marriage to Arthur Huntington, a connection which Helen’s aunt was deeply set against due to Huntington’s rakish and immoral reputation. Through the diary entry, Helen describes the steady decline of both their marriage and her love for Huntington, as well as the birth and development of her son Arthur. Huntington slowly degrades himself morally and physically because of his love of gambling, alcohol, and flirting. Helen does not want her son to follow in his father’s footsteps and decides to covertly flee from their home in Grassdale with the help of some servants. Once Gilbert finishes reading Helen’s diary, he tries to court her, but Helen refuses, saying that it would be wrong to do so since she is still married. She agrees to allow him to write to her in six months. During these six months and beyond Helen nurses Huntington until he finally dies. Gilbert finds Helen at her aunt’s house, where he proposes marriage to Helen, and she accepts. 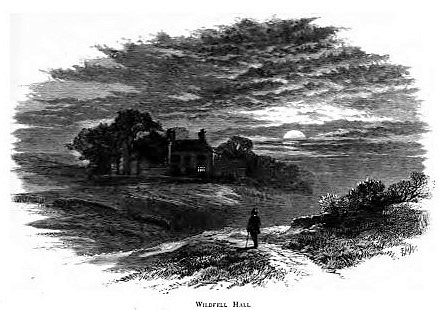 The head looked right enough, but when he placed my hand on the top of it, it sunk in a bed of curls, rather alarmingly low, especially in the middle.

Meanwhile, Huntington is able to see behind Helen’s performances by callously looking at the back of her paintings to find drawings of himself. Helen is unable to hide her own feelings and self behind a carefully constructed exterior and is truly artless, despite the warning her aunt gives her:

“Don’t boast, but watch. Keep a guard over your eyes and ears as the invests of your heart, and over your lips as the outlet, lest they betray you in a moment of unwariness. Receive, coldly and dispassionately, every attention, till you have ascertained and duly considered the worth of the aspirant; and let your affections be consequent upon approbation alone… Let your eyes be blind to all external attractions, your ears deaf to all the fascinations of flattery and light discourse- These are nothing- and worse than nothing- snares and wiles of the tempter, to lure the thoughtless to their own destructions. Principle is the first thing, after all; and next to that, good sense, respectability, and moderate wealth. If you should marry the handsomest, and most accomplished and superficially agreeable man in the world, you little know the misery that would overwhelm you, if, after all, you should find him to be a worthless reprobate, or even an impracticable fool.” (104)

In this warning, Helen’s aunt not only warns her to monitor her own exterior, but to also be aware that other’s outward shows may be nothing more than superficial bait. For Helen’s aunt, a rational decision is more vital than a passionate decision to marry.

…I open the window to inhale the balmy, soul-reviving air, and look out upon the lovely landscape, laughing in dew and sunshine… he cannot feel its freshening influence…the more my senses are pleased, the more my heart is oppressed; for he keeps it with him confined amid the dust and smoke of London- perhaps, shut up within the walls of his own abominable club. (175-176)

Huntington himself is aware of this belief that London’s air is contaminating and a negative influence. He uses it to his advantage in order to be rid of Helen, and later his son as well, when he desires to spend time with his friends (and women) in London:

“…It is the London air: you are pining for the fresh breezes of your country home…” (171)

The thing was absurd- the air of the town would be certain to disagree with him (her son), and with me as a nurse…he (Huntington) assured me that it would be excessively troublesome, injurious, and unsafe. (192)

Helen also repeatedly imagines that she and her husband are not only one spiritually, but that they form one body. By degrading himself physically and morally, he also destroys her:

…since he and I are one, I so identify myself with him, that I feel his degradation, his failings, and transgressions as my own… but I cannot act for him; and hence, I must be and I am debased, contaminated by the union, both in my own eyes, and in the actual truth. (206)

After marriage, until his death, there is no way for Helen to escape this contaminating influence. Even when she escapes with Arthur and Rachel, she is ridiculed and gossiped as a immoral, fallen woman. It is not until he dies that she is free from gossip, her name is cleared, and she is able to marry Markham, who is characterized as a good (although somewhat dependent upon the women in his life) man.

…I exerted all my powers to eradicate the weeds that had been fostered in his infant mind, and sow again the good seed they had rendered unproductive. Thank Heaven, it is not a barren or a stony soil, if weeds spring fast there, so do better plants. (288)

This is also used to describe the loss of sympathy between Helen and Huntington:

How little real sympathy there exists between us; how many of my thoughts and feelings are gloomily cloistered in my own mind; how much of my higher and better self is indeed unmarried- doomed either to harden and sour in the sunless shade of solitude, or to quite degenerate and fall away for lack of nutriment in this unwholesome soil! (191)

And, finally, Helen compares herself to a winter flower in order to accept Gilbert’s marriage proposal (but he doesn’t understand this at first):

“This rose is not so fragrant as a summer flower, but it has stood through hardships none of them could bear: the cold rain of winter has sufficed to nourish it, and its faint sun to warm it; the bleak winds have not blanched it, or broken its stem, and the keen frost has not blighted it. Look, Gilbert it is still fresh and blooming as a flower can be, with the cold snow even now on its petals- Will you have it?” (378)

The Tenant of Wildfell Hall (1848) by Caitlin Duffy is licensed under a Creative Commons Attribution-ShareAlike 4.0 International License.