Bernard Rose’s Candyman (1992) is based on Clive Barker’s short story “The Forbidden,” however, there are quite a few differences between the original text and the film. Rose wrote the screenplay along with directing, making the major change of setting from Liverpool, England, to Chicago in the United States. This allowed Rose to place the horrors of slavery at the center of Candyman’s lore. It received pretty good critical and box office reception results. On a budget of $6 million, its total American gross was $25 million. Critics viewed the film as nuanced despite its inclusion of some cheap and gory thrills. Roger Ebert’s review stated that “Elements of the plot may not hold up in the clear light of day, but that didn’t bother me much. What I liked was a horror movie that was scaring me with ideas and gore, instead of simply with gore.” Janet Maslin wrote that it was like “an elaborate campfire story” with “unusually high interest in social issues” in her review for The New York Times. 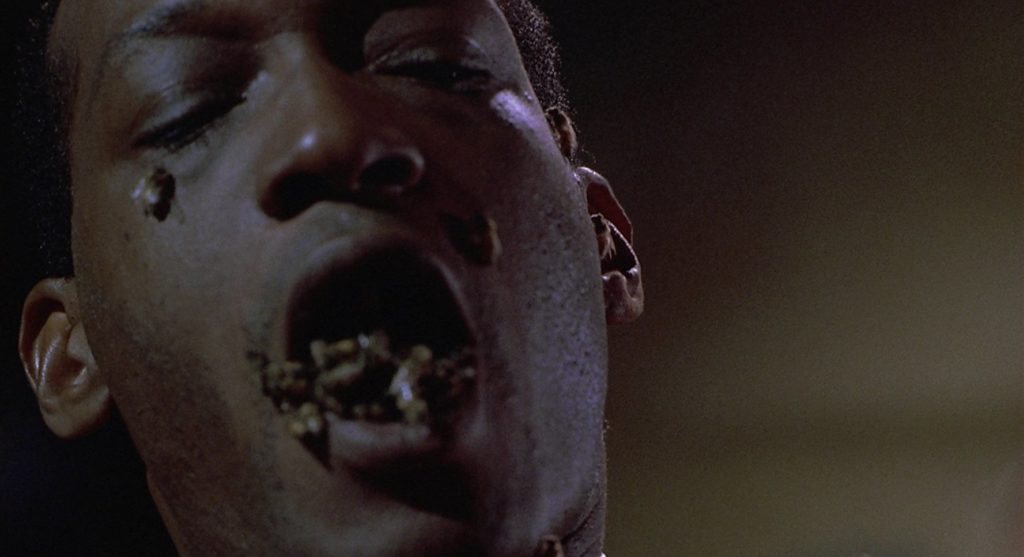 Candyman (Tony Todd) and the bees.

Bees are a central component to the Candyman’s lore, so actors needed to deal with live bees. Tony Todd, who played Candyman, was stung by bees 23 times while filming the entire trilogy. In one scene, he needed to bees to appear to come out of his mouth, so real bees were placed into Todd’s mouth! He only had a mouth guard to prevent the bees from flying down his throat. Virginia Madsen, who played Helen, was allergic to bees, so the film required that an ambulance remain always on set during bee scenes. 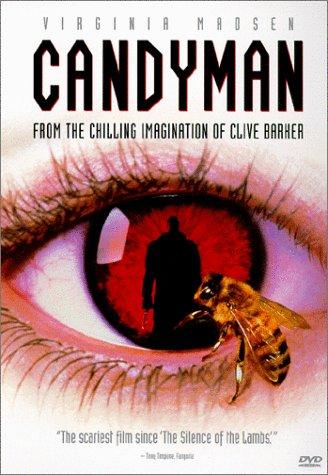 Helen Lyle, a Chicago graduate student, is working on her thesis which is focused on urban legends generally, and the local Candyman legend specifically. According to the legend, if you say the name “Candyman” five times while staring into a mirror, the Candyman appears and murders the summoner with a hook, which is jammed into his bloody stump of a right arm. Helen is working on this research with a fellow graduate student and friend, Bernadette Walsh.  They learn from two cleaning ladies about Ruthie Jean, a resident in the Cabrini-Green housing project who was supposedly murdered by Candyman. Following this lead, the two researchers discover twenty-five other murders in the housing project similar to Ruthie Jean’s. Still, they remain skeptical, and Helen even says “Candyman” five times in the mirror. Helen and Bernadette learn from Professor Purcell that Candyman was the son of a slave who became rich after developing a method to mass produce shoes during the Civil War. He was also a well-known portrait artist. In 1890, he fell in love with and impregnated a white woman whose father led a lynch mob against Candyman. His painting hand was cut off and replaced with a hook, he was smeared with honey, causing bees to sting him relentlessly. His body was finally burned on a pyre, where his ashes scattered across the land. This land is now where Cabrini-Green now stands. Helen repeatedly visits Cabrini-Green to investigate the area. She discovers that in Ruthie Green’s old apartment, the bathroom mirror conceals a secret passageway into another empty apartment. This hidden apartment contains graffiti of the Candyman, as well as a bag of candy filled with razor blades. Following this discovery, Helen repeatedly visits the housing project alone, causing her to fall victim to a local gang leader who had taken on the name of “Candyman” to get street cred, and to finally come face to face with the real Candyman. Candyman tells Helen that because she has discredited his legend through her research, he must “shed innocent blood” to regain his reputation and power. After encountering Candyman in a parking garage, Helen suddenly wakes up in Anne-Marie’s (a resident of Cabrini-Green) apartment covered in blood. Anne-Marie’s (Vanessa Williams) dog had been decapitated, blood covers the apartment, and her baby is missing. When Helen appears suddenly holding a meat cleaver, Anne-Marie calls the cops, who promptly arrest Helen. Her bail is paid by her husband, however, when she is alone in her apartment, Candyman appears to her again. Bernadette visits the apartment (bad timing), Candyman kills her, and once again frames Helen. She is placed in an asylum for the criminally insane, but once again Candyman appears, murders her doctor, and frames Helen. She escapes, and returns home. It turns out that she was sedated at the hospital for a month. Once home, she discovers that her husband is now living with one of his college students. Helen leaves for Cabrini-Green to confront Candyman. She offers herself to Candyman as long as Candyman agrees to return the baby to Anne-Marie. Unfortunately, although Candyman agrees, he tries to kill both of them by placing the baby in a bonfire pyre (not lit yet) outside of Cabrini-Green. Helen goes into the pyre to rescue the baby, but the residents light the bonfire for a party and Candyman appears, holding Helen and the baby inside of the bonfire. Helen manages to release herself from Candyman’s grasp. Burned to a crisp, she crawls out of the bonfire and hands the healthy, unharmed baby to Anne-Marie before dying. A young child resident of Cabrini-Green sees what appears to be the body of Candyman in the bonfire. At Helen’s funeral, all of the residents of Cabrini-Green appear to pay their respects. Later, Helen’s husband says her name five times into the mirror. Her ghost appears and kills him with a hook. Candyman’s voice asks Helen if she finds her new status as an eternal monster delightful. She has become part of the lore that haunts Cabrini-Green! 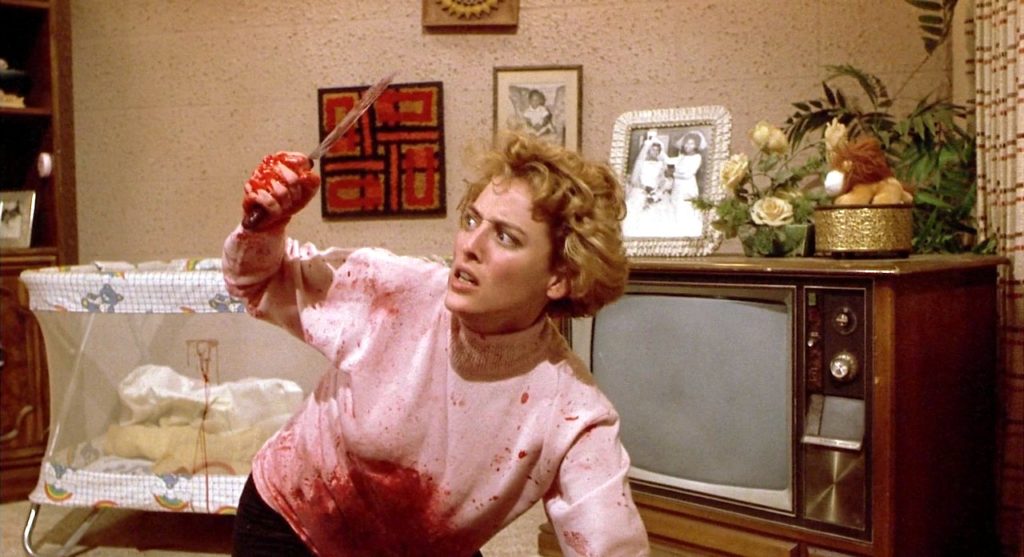 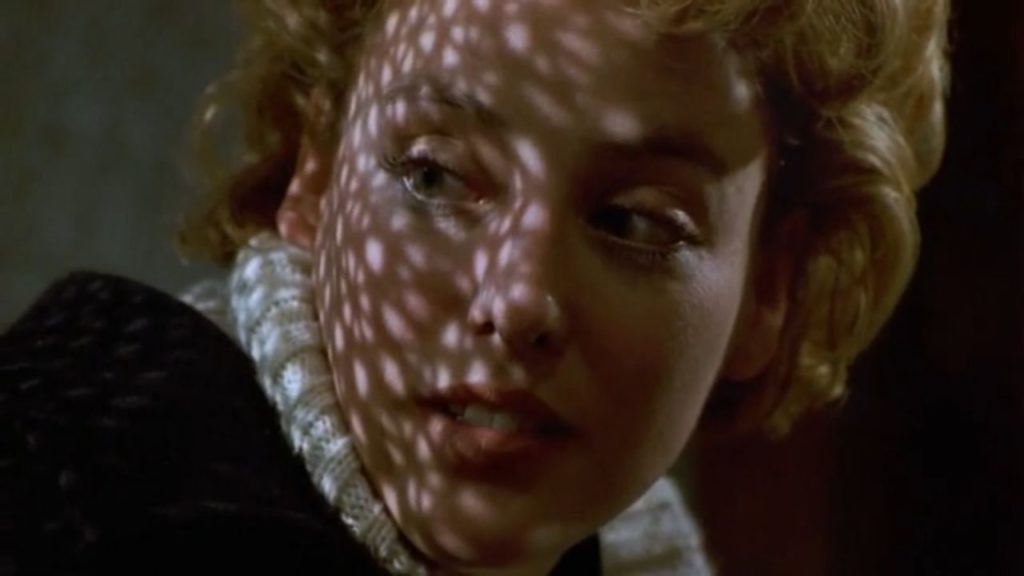 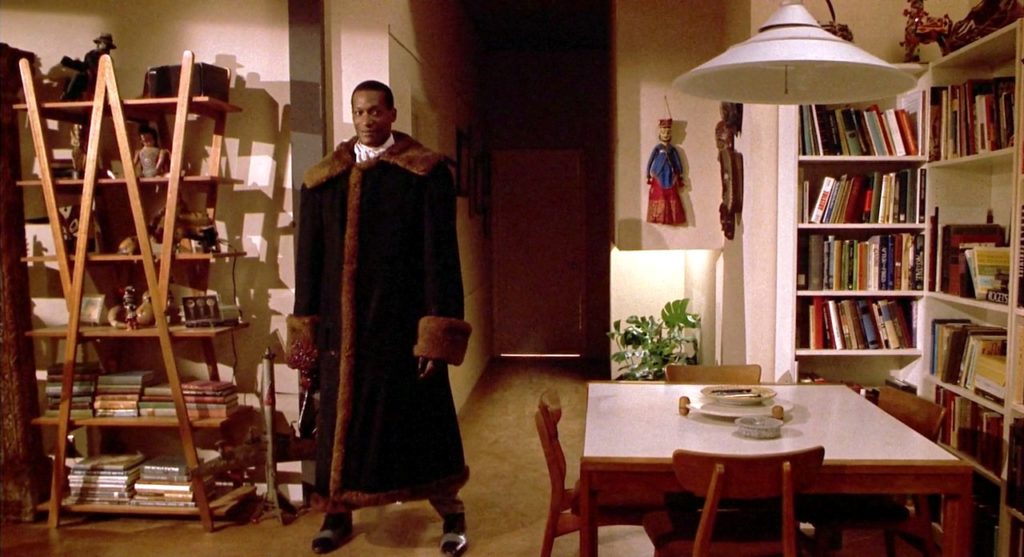 Candyman (1992) by Caitlin Duffy is licensed under a Creative Commons Attribution-ShareAlike 4.0 International License.