Although the majority of the film takes place in a (supposedly) previously unexplored cave in the Appalachians, Neil Marshall’s The Descent (2005) is a UK film, featuring an ensemble cast of women who are each from a different country. It originally had a limited release in the UK, but had a wide release in the United States in the following year. With an estimated budget of 3,500,000 pounds, it earned a worldwide gross of $31,005,153. The film had a weak opening weekend in the UK because the film was released the same week as the 2005 London bombings.

Filmmakers first considered filming the entire movie in a real cave, however, they ultimately decided that it would be too dangerous and too difficult to light. They instead built six artificial caves. There was one authentic setting, however: in the opening scene, the friends are white water rafting. This scene was done without any stunt doubles or special effects. I wonder if this is an attempt to repeat the same feat performed by the main cast members of Deliverance, especially since there are a number of direct references to the film.

Writer and director Neil Marshall wanted to capture real fear, so he made sure that the main actresses were unaware of what the creatures looked like or when they would appear in the film. In the scene where the creatures are first discovered by the group, the actresses had no idea that the creature actor was on set for a few seconds, resulting in a true reaction of terror when their flashlights happened to land on him.

There was a different ending to the film in which it is revealed that the main character, Sarah, has descended into madness. It was her who killed all of her friends in the cave after she imagined a group of creatures living within its depths. Marshall changed the ending when he decided that this would’ve been too obvious.

A year after surviving a traumatic car accident in which both her husband and only child were killed, Sarah (Shauna Macdonald) goes on a spelunking vacation with her adrenaline-loving friends, including Juno (Natalie Mendoza), Beth (Alex Reid), Rebecca (Saskia Mulder), Sam (MyAnna Buring), and Holly (Nora-Jane Noone). Unfortunately, Juno, who also seems to have had a secret affair with Sarah’s dead husband, hides the fact from the group that they are exploring an unmapped cave. Instead, she tells them that she chose an easy one for Sarah’s sake, since her recent tragedy has left her shaken (we see her taking pills the morning of their adventure, and she has a full-fledged panic attack early in the process of exploring the cave). Once Juno’s secret is revealed, the women begin to grow weary of each other and fight a lot. They also encounter a lot of obstacles as they try to find a way out of the cave: a tunnel collapses, they loose one of their rope sets, Holly falls and breaks her leg. As if all this wasn’t enough, they encounter a group of humanoid creatures who live in the cave and happily feast on human flesh. In their attempts to escape the monsters, the women become separated. Juno accidentally kills Beth. In her dying breaths, Beth tells Sarah not to trust Juno. Eventually, Juno and Sarah are the final survivors. Juno locates arrows which point towards the way out of the cave. Sarah kills Juno and escapes the cave herself. 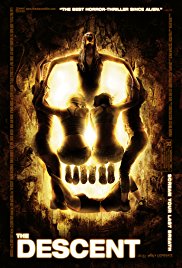 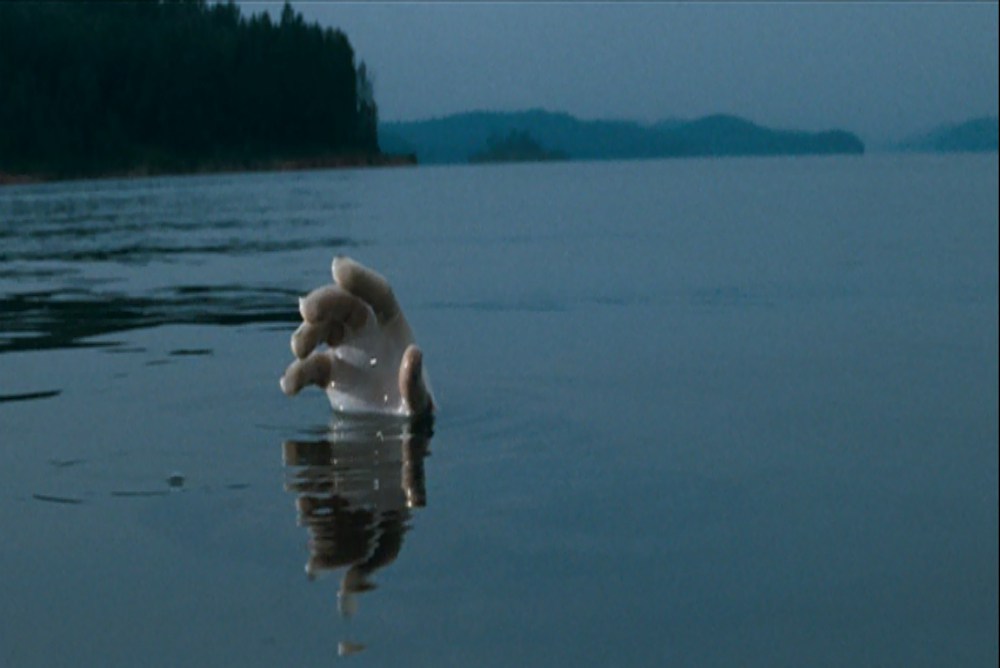 The hand shot at the end of Deliverance

The hand shot at the end of The Descent

One of the humanoid creatures

Sarah makes her way to the exit

Sarah is birthed from the earth.

Sarah at the start of the film

Sarah near the end of the film.

The Descent (2005) by Caitlin Duffy is licensed under a Creative Commons Attribution-ShareAlike 4.0 International License.