“The Legend of Sleepy Hollow” was written by Washington Irving as part of  his 1819 collection, The Sketchbook of Geoffrey Crayon, Gent.   It is the longest story of that collection. Although it is known for its contribution to the creation of American culture and literature, he wrote the story while living in Birmingham, England, during a tour of Europe. The collection is a frame narrative, written largely by the fictional Geoffrey Crayon, who inserts stories by the equally fictitious Diedrich Knickerbocker into his “sketchbook.” “The Legend of Sleepy Hollow” is one of the stories attributed to Knickerbocker.

Perhaps because of the fact that Irving wrote “Sleepy Hollow” while on a European tour, there are elements within the story common to European legends. For example, the figure of the headless horseman is familiar to German, Irish, Scandinavian, and English legend. According to the story’s Wikipedia page, the headless horseman was typically “viewed as omens of ill-fortune for those who chose to disregard their apparitions, these specters found their victims in proud, scheming persons and characters with hubris and arrogance.”

Although written in England, “Sleepy Hollow” is most likely composed of a number of Irving’s recollections from his life in New York, particularly from the years 1809 and 1814. 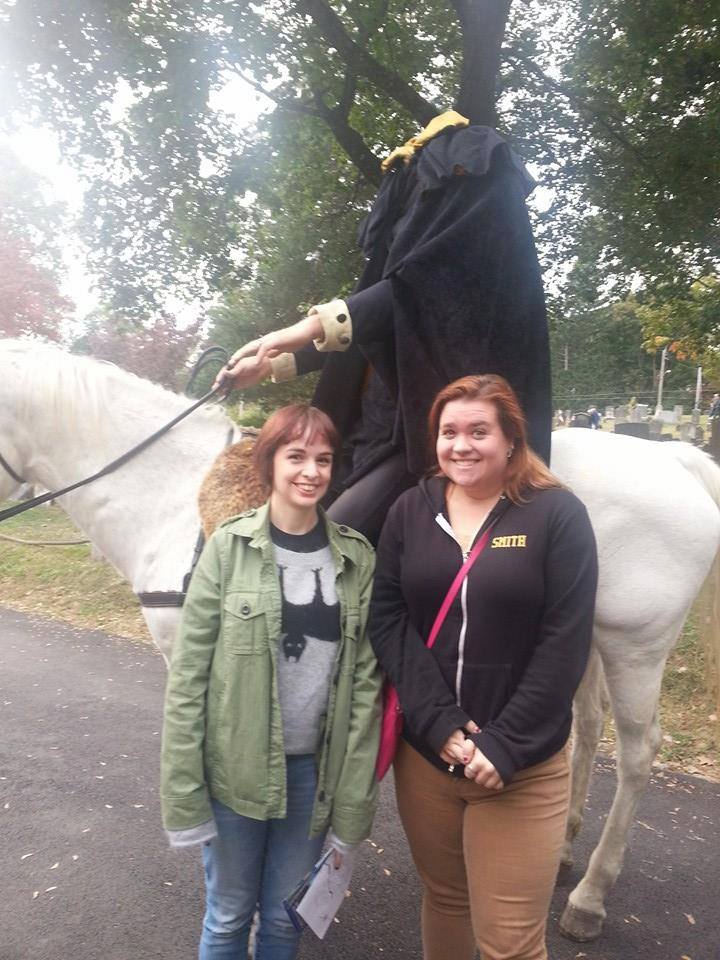 Irving’s “Sleepy Hollow” has caused the actual town of Sleepy Hollow to become a literary tourist spot, especially around Halloween. Here I am with a friend, narrowly escaping the clutches of the headless horseman.

The story begins with a brief description of the Dutch settlement of Tarry Town, New York, located in a secluded glen known as Sleepy Hollow. This description highlights the supernatural reputation which Sleepy Hollow boasted, however, story-tellers disagree over the cause of its mystical powers: whether because of a witch’s curse or because of powwows held by an American Indian tribe prior to colonization. Knickerbocker then focuses his tale on the experiences of Ichabod Crane in Sleepy Hollow in the year 1790. Crane was a gangly school-teacher who came to the town from Connecticut. After discovering the vast fortune which would eventually be inherited by Katrina Van Tassel, the sole child of the wealthy farmer Baltus Van Tassel, Crane concludes that he will propose to marry Katrina. Unfortunately for Crane, Katrina is a bit of a coquette and claimed the affections of many potential suitors, including local hero and prankster Bram Bones. After a party held at the Van Tassel home, Crane attempted to seal the deal with Katrina.The narrator is unsure of what happened between the two during this conversation, but notes that Crane left the house shortly after he began his advances. On his ride back to the home of Van Ripper, where Crane was being presently housed, he begins to ruminate on the numerous ghost stories told at the party. In particular, he thinks about the story of the haunted Andre’s Tree, where Major Andre had once been captured, and the returning presence of the headless horseman at this location. The nervous Crane suddenly spies the figure of the headless horseman, and attempts to ride his horse quickly away from the spirit, assuming that the stories of the horseman disappearing upon his return to the Old Dutch Cemetery must be true. Unfortunately, the headless horseman catches up to Crane and throws his “head” (a pumpkin) at Crane, who falls off his horse. The next day, Crane is nowhere to be found. The inhabitants believe that the horseman must have taken him away. Brom Bones marries Katrina and appears to know a lot about what happened to Crane (it was probably one of his pranks). Knickerbocker relates the story that a local farmer saw Ichabod when he visited Manhattan, and that the school-teacher had become a lawyer and politician. The “old country wives,” however persist in their belief that Ichabod was “spirited away.” In the story’s post-script, Knickerbocker adds that the entire story was told by a poor man to entertain a group of wealthy burghers in Manhattan. 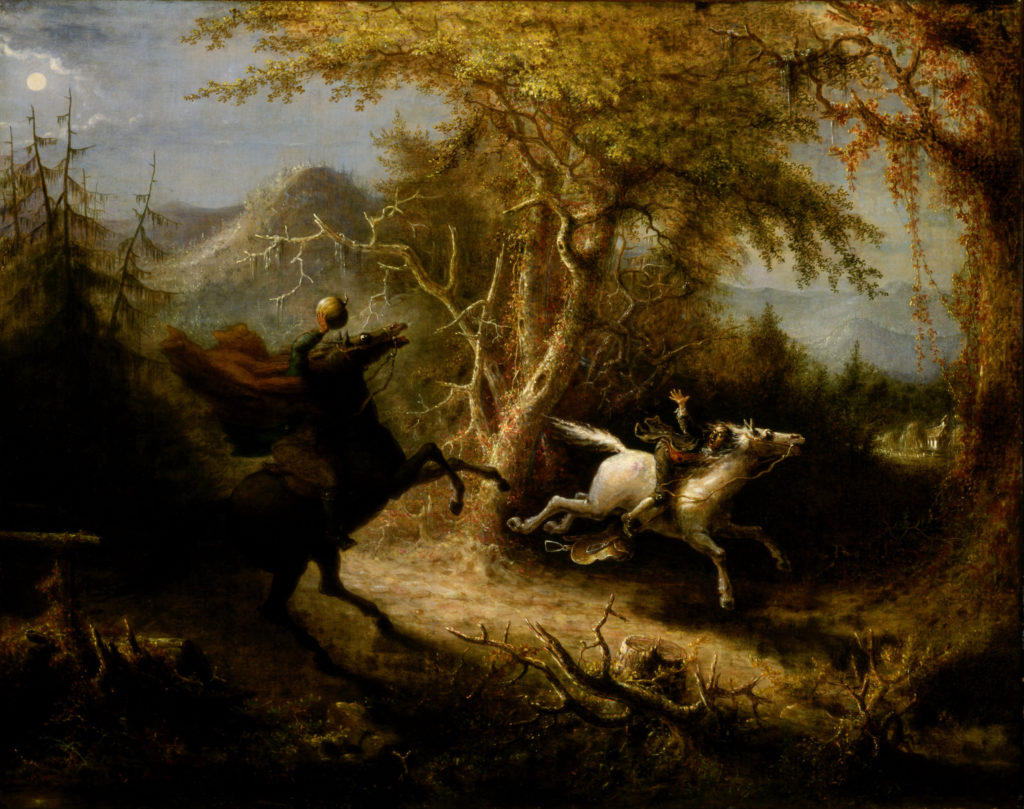 A drowsy, dreamy influence seems to hang over the land and to pervade the very atmosphere. Some say that the place was bewitched by a High German doctor during the early days of the settlement; others, that an old Indian chief, the prophet or wizard of his tribe, held his powwows there before the country was discovered by Master Hendrick Hudson. Certain it is, the place still continues under the sway of some witching power that holds a spell over the minds of the good people, causing them to walk in a continual reverie. They are given to all kinds of marvellous beliefs, are subject to trances and visions, and frequently see strange sights and hear music and voices in the air. The whole neighborhood abounds with local tales, haunted spots, and twilight superstitions; stars shoot and meteors glare oftener across the valley than in any other part of the country, and the nightmare, with her whole ninefold, seems to make it the favorite scene of her gambols.

The immediate causes however, of the prevalence of supernatural stories in these parts, was doubtless owing to the vicinity of Sleepy Hollow. There was a contagion in the very air that blew from that haunted region; it breathed forth an atmosphere of dreams and fancies infecting all the land. Several of the Sleepy Hollow people were present at Van Tassel’s, and, as usual, were doling out their wild and wonderful legends.

Irving cites an early practitioner of witchcraft and and Indian chief as possible causes of Sleepy Hollow’s contagious atmosphere. In this way, the stories told by the Sleepy Hollow people are examples of hauntings or ghosts themselves and it is the feelings of awe, curiosity, and fear that infect their listeners. This also has an ecogothic element, in which the land itself, or the very atmosphere of the American land, is capable of changing and destabilizing the individual human inhabitants. Rather than being rational American citizens, they are prone to superstition, which further adds to Sleepy Hollow’s reputation of being backwards or stuck in time. However, even Ichabod, who is an outsider and an educator, is fascinated by the supernatural (perhaps this is because of his time spent in Sleepy Hollow?) and carries with him a number of books, including Cotton Mather’s text on witchcraft.  So, along with witchcraft and American Indians, Irving also includes the puritans (and the American Revolution through the headless hessian), helping to create a story that is truly American.

Among the musical disciples who assembled one evening in each week to receive his instructions in psalmody was Katrina Van Tassel, the daughter and only child of a substantial Dutch farmer. She was a blooming lass of fresh eighteen, plump as a partridge, ripe and melting and rosy-cheeked as one of her father’s peaches, and universally famed, not merely for her beauty, but her vast expectations.

As the enraptured Ichabod fancied all this, and as he rolled his great green eyes over the fat meadow-lands, the rich fields of wheat, of rye, of buckwheat, and Indian corn, and the orchards burdened with ruddy fruit, which surrounded the warm tenement of Van Tassel, his heart yearned after the damsel who was to inherit these domains, and his imagination expanded with the idea how they might be readily turned into cash and the money invested in immense tracts of wild land and shingle palaces in the wilderness. Nay, his busy fancy already realized his hopes, and presented to him the blooming Katrina, with a whole family of children, mounted on the top of a wagon loaded with household trumpery, with pots and kettles dangling beneath, and he beheld himself bestriding a pacing mare, with a colt at her heels, setting out for Kentucky, Tennessee, or the Lord knows where.

He was a kind and thankful creature, whose heart dilated in proportion as his skin was filled with good cheer, and whose spirits rose with eating as some men’s do with drink. He could not help, too, rolling his large eyes round him as he ate, and chuckling with the possibility that he might one day be lord of all this scene of almost unimaginable luxury and splendor. Then, he thought, how soon he’d turn his back upon the old school-house, snap his fingers in the face of Hans Van Ripper and every other niggardly patron, and kick any itinerant pedagogue out of doors that should dare to call him comrade!

Old Baltus Van Tassel moved about among his guests with a face dilated with content and good-humor, round and jolly as the harvest moon. His hospitable attentions were brief, but expressive, being confined to a shake of the hand, a slap on the shoulder, a loud laugh, and a pressing invitation to “fall to and help themselves.”

It is perhaps because of Ichabod’s desire to turn the land’s productions into cash and to pull Katrina, the only Van Tassel of her generation, out of Sleepy Hollow that he needed to be purged from the town by Brom. As noted in “Rip Van Winkle,” Knickerbocker believes that people are greater stores of American history than texts. By preserving Sleepy Hollow and allowing it to remain stagnant in the past, America at large is able to keep its history.

“The Legend of Sleepy Hollow” (1819) by Caitlin Duffy is licensed under a Creative Commons Attribution-ShareAlike 4.0 International License.