Although written in 1827, Catharine Maria Sedgwick sets her novel Hope Leslie (mostly) in 1643. By looking back into the nation’s history, Sedgwick is able to write about America’s future. She also includes a number of famous Americans, most notably John Winthrop and the Pequot Mononotto. Sedgwick is known for her “domestic fiction” (although Hope Leslie is more accurately labeled a historical romance) which helped to create a national literature. She often writes beautiful description of American nature and incorporated patriotism with her critical view of Puritan fanaticism and oppression. When Hope Leslie was first released as a two-volume work, it was successful enough that contemporary critics compared it to Cooper’s immensely popular The Last of the Mohicans. The North American Review described Hope Leslie as an example of “the female influence of literature.” 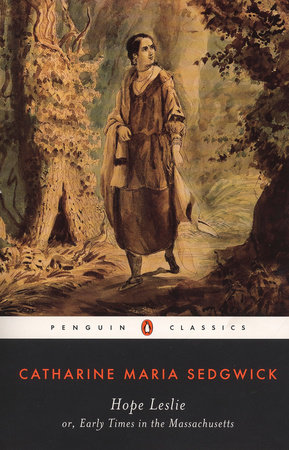 Hope Leslie opens in England with the doomed relationship of William Fletcher and his cousin Alice. Although the two love each other, Alice’s father refuses the match because of religious differences (William becomes a Puritan). Alice marries Charles Leslie instead and Williams leaves England with some Puritans for the Massachusetts Bay Colony in America, where he meets and marries an orphan girl named Martha. He and Martha eventually settle a few miles from the town and have three children, including a son named Everell. He receives word that Alice and Charles Leslie have died and have left two children, Hope and Faith, behind. He and Martha accept the two daughters into their home as their own, though William hopes that Hope and Everell will eventually marry. With the addition of the two girls, the Fletchers feel the need to hire two American Indian servants, Magawisca and Oneco, the children of a Pequot chief named Mononotto who were displaced because of the Pequod War. Unlike the rest of the household, Everell trusts Magawisca, even when he sees her sneak from the house at night to speak with an old native woman named Nelema. Hope and William Fletcher travel to the populated coast for business, leaving the rest of the family behind. Magawisca learns that her father is planning to attack the Fletchers’ home in order to get his children back and to gain revenge. She considers telling Everell, but decides against it. When Mononotto and his group attacks the home, Everell is the only male left to defend the house, which he attempts, but ultimately fails. Everyone in the Fletcher family except for Everell and Faith Leslie are killed, but these two are taken prisoner. When William and Hope return, they find all their family members either dead or kidnapped, which is devastating and terrifying for them. Meanwhile, Everell is prepared for sacrifice in reparation for Mononotto’s son who died in the Pequod War at the hands of white settlers, however, Magawisca saves him from being killed by leaping in between her father and Everell. Instead of killing the boy, then, Mononotto slices off his own daughter’s arm. Magawisca and Everell escape together. Everell travels to England. Hope is made to live with the Winthrop family in Boston and becomes good friends with Esther Downing, Mrs. Winthrop’s niece who is seemingly better at everything than Hope. Everell returns from England and stays with Mr. Fletcher in Boston. Although Hope is in love with Everell, she assumes that Everell and Esther are in love with each other and a better match. Hope is set up by the Winthrops to marry Sir Philip Gardiner. Nelema is able to get Magawisca to bring Faith to see Hope. Faith no longer speaks English and everything she says must be translated by Magawisca. Faith is set to marry Magawisca’s brother, Oneco, and is now a Catholic. Sir Philip sets up a trap upon their meeting, causing Magawisca to be imprisoned and Hope to be taken captive by Oneco. Hope manages to escape, and with Everett’s help, manages to sneak Magawisca out of the prison. Esther realizes that Everell and Hope love each other, so she leaves for England. Everell and Hope are married, making up for the inability of their parents, William Fletcher and Alice, to get married. 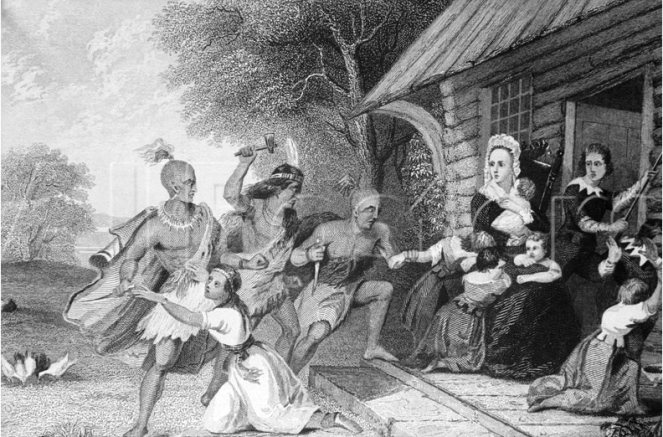 Attack on the Fletcher home

It may appear improbably that a girl of seventeen, educated among the strictest sect of the puritans, should have had the open, fearless, and gay character of Hope Leslie; but it must be remembered that she lived in an atmosphere of favor and indulgence, which permits the natural qualities to shoot forth in unrepressed luxuriance- an atmosphere of love, that like a tropical climate, brings forth the richest flowers and most flavorous fruits. (127)

Because she lives in a cultivated and indulgent “atmosphere,” Hope can grow up properly. This is drastically different from Faith who ultimately grows up in the wilderness and virtually becomes an American Indian. The inverse of this description, which would pretty much describe Faith, would be a decidedly gothic one in which the self is destabilized or degenerated. Finally, it’s interesting to see Hope described here as a flower or fruit, while throughout the novel female characters are repeatedly described as different sorts of birds.

The warrior’s obdurate heart untouched by the sight of the helpless mother and her little ones, was thrilled by the courage of the heroic girl- he paused and grimly smiled on her when his companion, crying, “hasten, the dogs will be on us!” leveled a deadly blow at Mrs. Fletcher… (66)

The savage, in his struggle with Everell, had tossed the infant boy to the ground; he fell quite unharmed on the turf at Mononotto’s feet. There raising his head, and looking up into the chieftain’s face, he probably perceived a gleam of mercy, for with the quick instinct of infancy, that with unerring sagacity directs its appeal, he clasped the naked leg of the savage with one arm, and stretched the other towards him with a piteous supplication, that no words could have expressed. Mononotto’s heart melted within him; he stooped to raise the sweet suppliant, when one of the Mohawks fiercely seized him, tossed him wildly around his head, and dashed him on the doorstone. (67)

I wonder if this is part of the same belief that Robert Bird held: that time spent in the American wilderness had the capacity to degenerate human beings.  Bird believed that the American Indian was inferior to the white man, not because of inherent racial differences, but because of time spent in wilderness vs. time spent in civilization. The children of Mononotto have spent less time in the wilderness and more time in Fletcher home than the warriors their father brought. However, it doesn’t explain Mononotto’s ability to feel compassion for the baby where others did not… maybe this is part of a class hierarchy view that grants him more noble aspects because of his status as a chief?

…interposed her arm. It was too late. The blow was levelled (sp.)- force and direction given- the stroke aimed at Everell’s neck, severed his defender’s arm, and left him unharmed. The lopped quivering member dropped over the precipice. Mononotto staggered and fell senseless, and all the savages, uttering horrible yells, rushed toward the fatal spot. (97)

Once complete, Magawisca’s castration changes her. While an active agent prior to this moment, she becomes more passive, only appearing to bring Hope her sister and then to be rescued by Hope near the end. She and Esther are the only two of the young main characters who are not married by the end of the novel. By de-sexing the character of Magawisca, Sedgwick is able to avoid creating a picture of Indian femininity.