The Terror of Neoliberalism (2004)

In this book, Henry Giroux argues that neoliberalism has been wrongly viewed for too long as an economic theory. Instead, Giroux defines neoliberalism as a complex theory of values, ideologies, and practices that are perhaps best examined through cultural studies due to neoliberalism’s ability to seep into our everyday life. In particular, Giroux highlights the ways that neoliberalism is destroying democracy and engaged citizenship in the United States (specifically focusing on George W. Bush’s presidency) through its erosion of public programs, participation, and spaces. He describes the way that the public is trained to accept the supposedly common sense of neoliberalism through a form of public pedagogy, which is not only implemented through our schools, but also through popular culture. 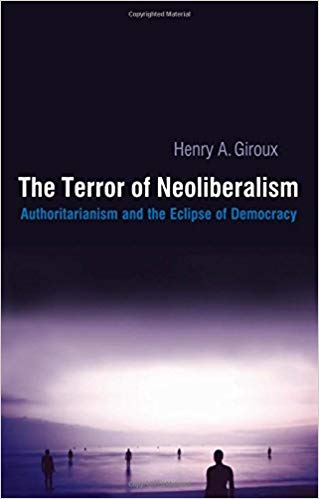 First, Giroux analyses what he sees as the “disagreement is treason” mentality present during the Bush years:

…this “disagreement is treason” bravado has a lot in common with traditional fascist movements that attacked critical thinking as a way of “exploiting and exacerbating the natural fear of difference.” Put differently, the embrace of anti-intellectualism and distrust of critical thought and intellectuals supports authoritarianism over and against democracy. (7)

Since taking office,Trump has repeatedly utilized an “us vs. them” mentality, both in his positioning of Republicans vs. Democrats, himself vs. fake news, as well as Americans vs. the rest of the world.

He later describes the Bush administration as trying to push American back in time:

The alliance of neoconservatives, extremist evangelical Christians, and free-market advocates on the political Right imagine a social order modeled on the presidency of William McKinley and the values of the robber barons. The McKinley presidency lasted from 1897 to 1901 and “had a consummate passion to serve corporate and imperial power.” This was an age when blacks, women, immigrants, and minorities of class “knew their place,” big government served the exclusive interests of the corporate monopolists, commanding institutions were under the sway of narrow political interests, welfare was a private enterprise, and labor unions were kept in place by the repressive forces of the state. (17)

This passage absolutely reminds me of Trumps “MAGA” slogan, which literally recalls and yearns for an America of the past. This also makes me consider the current nostalgia for the 1980’s present in today’s popular culture (Stephen King’s return, Stranger Things, the American Psycho musical, synth wave’s resurgence, etc.). Is this also a form of yearning or is it a rewriting? How does this factor into what Giroux defines as “public pedagogy” (described later in this blog post)?

As democracy is attacked and replaced by corporate interests through a neo-authoritatiranism, Giroux claims that citizens become viewed only through their behavior as consumers:

The good life, in this discourse, “is construed in terms of our identities as consumers- we are what we buy.” (50)

In American Psycho, this statement couldn’t be more true. Bateman narrates the novel, describing himself and his friends, as well as NYC, only through the labels of their clothing, their restaurant orders, their technology, apartments, and gym memberships. He goes further to define himself by the bodies of victims he (sometimes literally) consumes, and eventually develops his taste from cheap, homeless victims, to more high class victims, like Paul Owen. This also makes me consider modern-day activism, which often comes down to boycotting companies and items.

Giroux takes time to describe the negative effects of “empty language.” I was so excited to find this section in his book because one of the scenes in American Psycho that has so far given me the toughest time is when Patrick Bateman lists off a number of seemingly compassionate and liberal beliefs, claiming them as his own political stances. For example, he desires an end to racial apartheid, to “provide food and shelter for the homeless,” and to provide “training and jobs for the unemployed” (15-16). However, in the same breath, he also inserts the following beliefs: “We have to stop people from abusing the welfare system…change the abortion laws to protect the right to life yet still somehow maintain women’s freedom of choice. We also have to control the influx of illegal immigrants. We have to encourage a return to traditional moral values and curb graphic sex and violence on TV, in movies, in popular music, everywhere” (16). I think this speech may be attributable to what Giroux terms “empty language”:

Bush’s public speeches, often mimicked in the media, are filled with what Renana Brooks has called “empty language”- that is, statements that are so abstract as to be relatively meaningless, except to reinforce in simplistic terms an often reactionary ideological position. (23)

Although Bateman’s statements aren’t necessarily “abstract” here, they are often contradictory, especially with his actions, a move also engaged with by Trump. Using language in this meaningless way helps figures of power to resist argumentation and prevent critical discussion. In American Psycho, this speech immediately places Bateman in a position of moral power at the dinner table and ceases all other discussion about political and social issues.

Within the neoliberal register, globalization “represents the triumph of the economy over politics and culture… and the hegemony of capital over all other domains of life.” Under neoliberal globalization, capital removes itself from any viable form of state regulation, power is uncoupled from matters of ethics and social responsibility, and market freedoms replace long-standing social contracts that once provided a safety net for the poor, the elderly, workers, and the middle class. The result is that public issues and social concerns increasingly give way to a growing culture of insecurity and fear regarding the most basic issues of individual livelihood, safety, and survival. Increasingly, a concern with either the past or the future is replaced by uncertainty, and traditional human bonds rooted in compassion, justice, and a respect for others are now replaced by a revitalized social Darwinism, played out nightly in the celebration of reality-based television, in which rabid self-interest becomes the organizing principle for a winner-take all society. (59)

He goes on to describe figures like Paris Hilton and Arnold Schwarzenegger as celebrities who help to inculcate the public with neoliberal values. For example, Paris Hilton has come to represent the fact that wealth can be gained through no education, talent, or kindness, while Schwarzenegger has served to align politics with entertainment. As a figure of reality television, popular culture, and now the president, Donald Trump, “the reality tv president,” has come to embody all of these things.

Public pedagogy in this sense refers to a powerful ensemble of ideological and institutional forces whose aim is to produce competitive, self-interested individuals vying for their own material and ideological gain. The culture of corporate public pedagogy largely cancels out or devalues gender, class-specific, and racial injustices of the existing social order by absorbing the democratic impulses and practices of civil society within narrow economic relations. Corporate public pedagogy has become an all-encompassing cultural horizon for producing market identities, values, and practices. (106)

I say that this concept is important because I study popular culture (both in the present day and the 19th century). My interest in popular culture mainly lies in the fact that it serves a purpose, that can often be nefarious, to indoctrinate the masses into a given culture. This is especially the case with horror and the gothic: although it does have the potential to be a subversive force, horror and the gothic are genres that are easily reproducible and are patterned off of mass-produced goods. Characters and plot lines are repeated, yet the public still craves more. In creating this mass-produced culture, film-makers can and do incorporate values and lessons that are important for scholars and educators to discover. Monsters are especially interesting for this purpose, as they often provide a clear example of what is “other,” abnormal, and what must be removed from society.

But freedom reduced to the ethos of self-preservation and brutal self-interest makes it difficult for individuals to recognize the forms that racism often takes when draped in the language of either denial, freedom, or individual rights. (63)

This belief system is absolutely present in the film Candyman (as noted in my blog post on the film) and is repeatedly questioned in The Purge series. Rather than point to systemic racism as a major obstacle that many in America must face in order to reach “success,” neoracism privatizes the failure of individuals, claiming that it is not the public system of race, but rather their own individual incapacity for achievement. This also seems to fit with Patrick Bateman’s worldview, who repeatedly launches into racist and misogynistic tirades, but does so only after others have failed to perform labor at the level he expects.

The Terror of Neoliberalism (2004) by Caitlin Duffy is licensed under a Creative Commons Attribution-ShareAlike 4.0 International License.