Much like her sister Anne’s The Tenant of Wildfell Hall, Emily’s Wuthering Heights received a controversial reputation after its first release. The novel polarized readers and reviewers because of its stark representation of depravity and cruelty. It also challenged Victorian ideals including morality, social classes, and gender equality.

In the preface to the second edition of Wuthering Heights, Charlotte Brontë recognizes the harsh nature of the novel and its characters, and sets this down to the novel’s realistic portrayal of “the rusticity of Wuthering Heights… It is moorish, and wild, and knotty as the root of a heath” (li). She goes on to analyze the character of Heathcliff, who she notes is “unredeemed” by the end of the novel (liii). She adds that Heathcliff’s “one solitary human feeling” can be found in his esteem for Hareton Earnshaw and his “half-implied esteem” for Nelly Dean (ibid.).

These solitary traits omitted, we should say he was child neither of Lascar nor gipsy, but a man’s shape animated by demon life- a Ghoul- an Afreet. 1 (liii)

Perhaps Charlotte spent so much time in the prologue to describe the evils present in the novel in the guise of Heathcliff, as well as the “wild” nature of the novel itself, in order to counter the arguments that Wuthering Heights was an immoral book. Instead, Charlotte frames it as a realistic novel that provides counterexamples to Heathcliff’s evil nature through the figures of Nelly Dean and Edgar Linton. Through her reading of WH, it becomes a novel that can be learned from, as well as a novel that allows its readers to safely journey to the wild and rustic atmosphere of the moors. 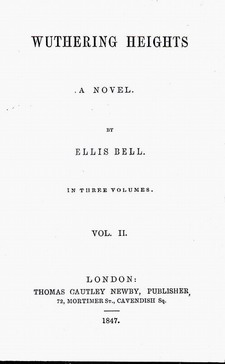 Because much of the story is related by Nelly Dean to Lockwood, the narrative often jumps back and forward through time.

The novel opens in 1801, when a wealthy though somewhat introverted young man named Lockwood arrives at Thrushcross Grange in Yorkshire, the home he rents from Heathcliff in order to retire from the busy world and enjoy some peace. He almost immediately visits Heathcliff, his landlord who lives in the moorland farmhouse known as Wuthering Heights nearby. Lockwood finds Heathcliff to be very gruff and uncouth. He also meets Catherine Heathcliff, Heathcliff’s daughter-in-law, and Hareton Earnshaw, Heathcliff’s nephew. Although a member of the family, Hareton strangely dresses and behaves like a servant. After getting snowed in, Lockwood must stay the night at Wuthering Heights. He is placed (without Heathcliff’s knowledge) in a small bedroom, which turns out to be the late Catherine Lipton’s room. After finding trace’s of Catherine’s former presence, Lockwood sees Catherine’s ghost outside of the window, begging to be let in, but this may have been just a dream. When Heathcliff later excitedly inspects the window, he doesn’t see Catherine.

On Lockwood’s return home through the snow, he gets lost after Heathcliff leaves him. He becomes sick due to his time in the cold, so he becomes bedridden. The Grange’s housekeeper, Nelly Dean, agrees to tell him the story of Heathcliff and the Heights while he is recuperating.

Thirty years prior to Lockwood’s arrival, the owner of Wuthering Heights was Mr. Earnshaw. One night, after a visit to Liverpool, he meets a young homeless boy, who he adopts and names “Heathcliff.” Although Earnshaw’s daughter becomes fast friends with Heathcliff, Earnshaw’s son Hindley becomes jealous of Heathcliff for taking over all of his father’s love.

Once Earnshaw dies, Hindley becomes the landowner and master of Wuthering Heights. He allows Heathcliff to stay, but treats him as a servant. One day, Heathcliff and Catherine sneak over to the Grange to spy on the two Linton children, Edgar and Isabella. They are caught, and Catherine is taken into the house to recuperate after she is attacked by the family dog, but Heathcliff is immediately sent home. The Lintons are landed gentry and refuse to view Heathcliff as their (or Catherine’s) equal. When Catherine returns to the Heights, she is completely changed, and behaves much more like a lady. Hindley’s wife Frances gives birth to a son named Hareton, but she dies soon after and Hindley descends into drunkenness and violence. Catherine and Edgar grow closer and soon announce that they are lovers. Edgar eventually proposes to Catherine and she accepts, however, she admits to Nelly, her housemaid, that her love for Edgar is not equal to her love for Heathcliff, who she feels she cannot marry because of his lack of education and low social status. Heathcliff overhears the second part of her confession (not that she loves him) and runs away. Catherine marries Edgar and moves to the Grange. After six months being gone, Heathcliff returns as a wealthy gentleman. He elopes with Isabella, Edgar’s younger sister, as a way to seek revenge against Edgar. Heathcliff and Isabella live at the Heights, where Isabella is gravely mistreated, and Heathcliff purposefully miseducates Hareton as another means of revenge. Catherine is pregnant with Edgar’s child, but fatally sick. After he hears that Catherine is dying, Heathcliff urges Nelly to sneak him into her bedroom. After his secret visit, Catherine dies. Heathcliff sneaks in again to view Catherine’s body one last time, and replaces Edgar’s lock of hair with his own lock in a necklace Catherine wears. Nelly corrects this, intertwining both locks of hair.

After the funeral, Isabella runs away from Heathcliff and gives birth to their son, Linton. Soon after, Hindley also dies and leaves Heathcliff to become the master of the Heights.

Twelve years later, Catherine’s daughter, Cathy, has grown up and yearns to see the world outside of the Grange, but Edgar is too protective of Cathy to risk the chance of her running into Heathcliff. Isabella sends a letter to Edgar to tell him that she is dying and she begs him to take in her son as his own, to prevent Heathcliff from raising him. Edgar heartily accepts, but once the fragile boy appears at the Grange, Heathcliff immediately summons him to the Heights, where Linton is treated coldly, but is given an education and raised as a gentleman. A few years later, Heathcliff’s plot to have Linton marry Catherine comes to fruition. Knowing that Linton was sickly and would soon die, Heathcliff desires the marriage so that he would eventually inherit both the Heights and the Grange. After luring Cathy and Nelly to the Grange, he holds them both captive until Cathy marries Linton. After their marriage, Cathy escapes just in time to see her father before he dies. Soon after that, Linton dies and Heathcliff becomes mater of all.

Back in the present day of 1801, Lockwood considers marrying Catherine, however, she coldly rebukes any kind word he makes towards her. He decides that he has grown tired of the moors and leaves.

Eight months later, Lockwood happens to be in the area and stops by the Grange to catch up with Nelly, but he discovers that she now lives in the Heights. While he was gone, Hareton and Cathy became close and plan to marry on New Years’ Day. Heathcliff, after having visions of his Catherine asking him to join her, stopped eating and, after four days, died in Catherine’s old bedroom. He was buried next to Catherine.