James Fenimore Cooper’s The Last of the Mohicans (1826) is the second book of the Leatherstocking Tales and is set in 1757, during the French and Indian War.  Cooper wrote it at a time when Americans believed that the American Indian population was steadily declining and would disappear soon. This concern factors into the novel’s story.

Like Cooper’s other novels, Mohicans was popular but received dismissive reviews from his contemporary critics. Most notably, Mark Twain reviewed the novel and Cooper in his 1895 essay “Fenimore Cooper’s Literary Offenses” for the North American Review. Twain complains that Cooper used “extra and unnecessary words” throughout Mohicans. Today, Mohicans is considered to be the first Great American Novel. 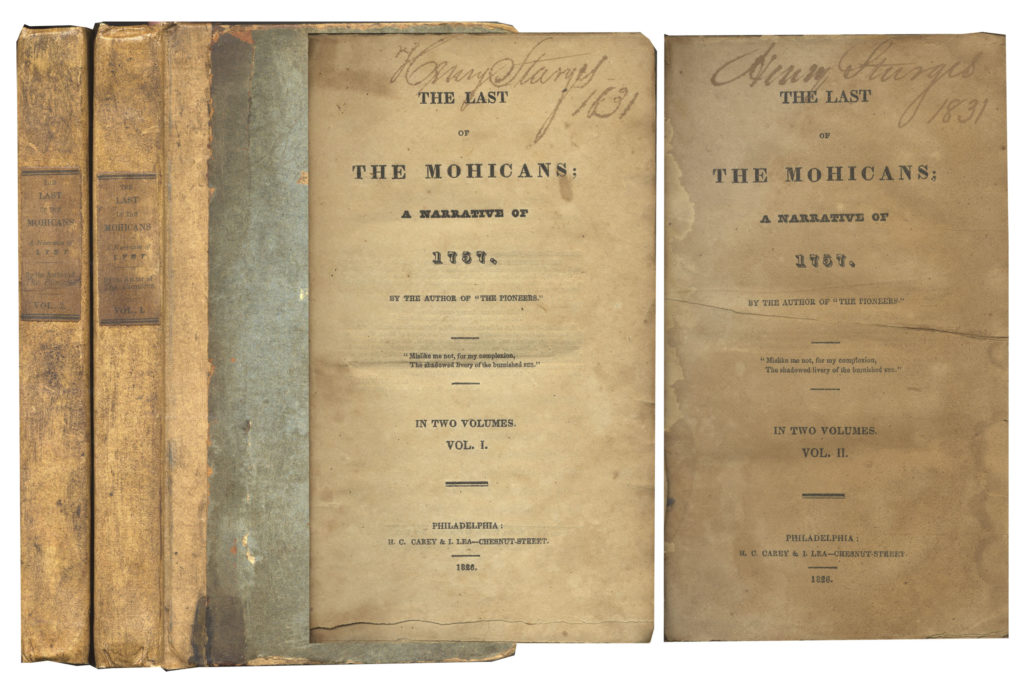 Original title page of The Last of the Mohicans

The story is set in the year 1757 in the wilderness of upper New York. Cora and Alice Munro, the daughters of Lieutenant Colonel Munro, are escorted by Major Duncan Hayward from Fort Edward to Fort William Henry (where Munro commands) and are guided by Magua, an American Indian who leads them through a short cut without the British militia. Almost immediately, the team is joined by David Gamut, a singing teacher, Natty Bumppo (aka Hawkeye), a British scout and frontiersman, and Hawkeye’s two Mohican friends, Chingachgook and his son Uncas. Magua is discovered to be allied with the French and manages to escape right when the team learns of his secret alliance. From this moment on, the escort team, and eventually Munro himself, face numerous obstacles and battles. Magua repeatedly returns to challenge the team, hungry to revenge himself against Colonel Munro for whipping him at a post and for turning him into an alcoholic, which caused Magua to be cast out of Huron society and to loose his wife. He believes that by forcing Cora to marry him, he will have executed his revenge. Numerous disguises are used throughout the novel, including Heyward donning the costume of a French medicine man, Hawkeye wearing the skins of a bear, and Chingachgook dressing as a beaver. The novel concludes with a major battle held between the Delawares (who were historically aligned with the Mohicans) and the escort team against Magua and the Hurons. Magua demands that the Delawares hand over Uncas, Hawkeye, Alice, Cora, and Heyward, all of who he believes are his rightful prisoners. Tamenund, the Delaware sage, disagrees with him except with Cora, who is viewed as Magua’s rightful prisoner. After Cora is handed over, Tamenund gives Magua a three-hour head start before he is pursued. Magma gathers his forces in the forest and the Delawares, Mohicans, Hawkeye, Heyward, and Gamut march into the forest to fight Magua and his men. In a final scene, Magua is chased up to a mountain, where he has taken Cora. Cora threatens to jump off the mountain rather than marry Magua, and one of his men stab Cora for her insolence. Magua and Uncas also die in an ensuing fight after Cora’s death. A long funeral scene follows this battle, in which Uncas and Cora are buried and mourned in a Delaware ceremony (although Gamut also sings Christian hymns at Cora’s graveside. There is some talk among the Delaware women that Cora and Uncas may be married in the afterlife. 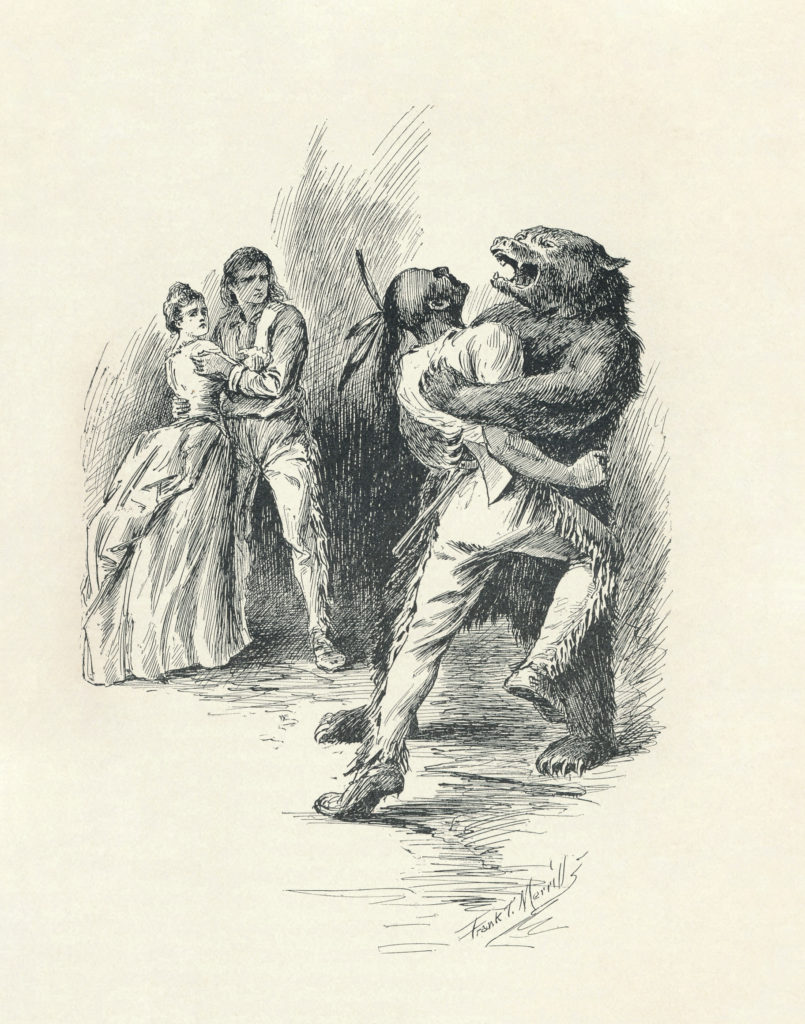 Hawkeye in his bear disguise

I was repeatedly reminded of William Bradford’s description of the initial encounter between the early Puritan settlers and the American Indians in his Of Plymouth Plantation. In this text, he describes the first sign of the American Indians’ presence as “a hideous and great cry” coming from the woods (I.10). Throughout Mohicans, American Indians are announced through screams, cries, and shouts emanating from the forest. Sometimes, it is difficult for the main characters to differentiate between animal and Indian cries, such as when Heyward and the escort team believe that a shriek they repeatedly hear must be a horse crying out (Chapter 6). This is similar to Bradford’s description of the cries as sounding like something belonging to “a company of wolves or such like wild beasts.”

…a cry, that seemed neither human nor earthly, rose in the outward air, penetrating not only the recesses of the cavern, but to the inmost hearts of all who heard it. (74)

…the air continued full of horrible cries and screams, such as man alone can utter, and only when in a state of the fiercest barbarity. (114)

…paused until the forest beneath them had sent up the last echo of a loud and long yell…His voice was no longer audible in the burst of rage which now broke into the air, as if the wood, instead of containing so small a band, was filled with the nation. (146-7)

While his lips were yet in the act of parting, a low but fearful sound arose from the forest, and was immediately succeeded by a high, shrill yell, that was drawn out, until it equalled the longest and most plaintive howl of the wolf… At the same moment,the warriors glided in a body from the lodge, and the outer air was filled with loud shouts, that nearly drowned those awful sounds, which were still ringing beneath the arches of the woods. (342-3). 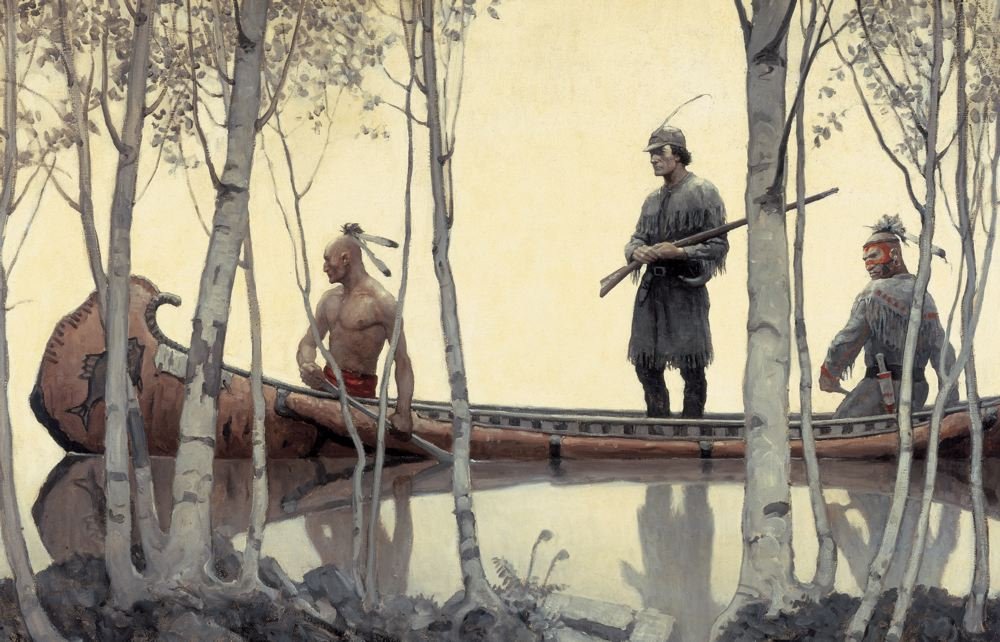 The Last of the Mohicans (1826) by Caitlin Duffy is licensed under a Creative Commons Attribution-ShareAlike 4.0 International License.