In Bodily Natures (2010), Stacy Alaimo argues for an understanding of the human self/body as inherently and deeply interconnected with the environment. By doing this, there will be a “profound shift” in our understanding of our subjectivity. Where there was once a clear, bounded human subject, there is now a material self that is tangled with outside networks that are “economic, political, cultural, scientific, and substantial” (20). By adopting what she terms a “trans-corporeal” stance, we become more aware of the “nearly unrecognizable ethics” that forces us to investigate the material/economic/cultural systems that are potentially harmful to life (18). 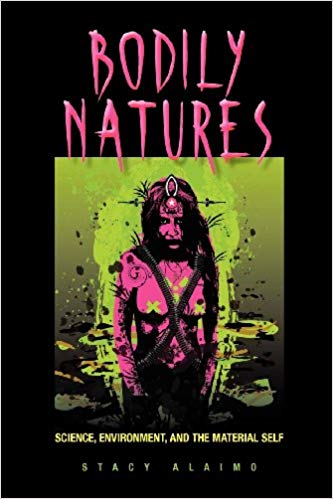 I especially like this idea of the permeable human body, not only because it forces us to examine our interaction and place within the environment closer, but it also directly connects to Theresa Brennan’s The Transmission of Affect, which also posits that the human body is porous, adding that it is prone to experience energy enhancement or depletion via the influence of other humans and the environment. For Brennan, the physical influence comes into the body by means of affect, which she defines as “the physiological shift accompanying a judgement” which contains an “energetic dimension” (5-6).  Although Brennan focuses more on the transmission of affect amongst human bodies rather than between the environment and the human body, the role of the atmosphere in her theory is significant. According to Brennan, “the energetic affects of others enter the person, and the person’s affects, in turn, are transmitted to the environment” (8). In defining how this movement works, Brennan suggests that the senses are key players in affective transmission. For Brennan, scent is the most powerful of the senses in transmitting affects because an odor can become “a vehicle for effecting changes in another’s hormonal (hence affective) composition” (10). She further contends that smelling is equivalent to consuming and that something is added within our bodies in the process of smelling the atmosphere (68-9). Touch, hearing, and sight are also listed in The Transmission of Affect as methods of affective transmission, however, these senses are not as powerful as smell. She explains that they all are “matters of vibration” but that they vibrate at different frequencies (70-1). Brennan believes that these senses “vibrate” within and minutely alter the human body. Alaimo is more interested in the way that the human body is hurt and does not blatantly bring up affect, however, both come at this same question of how the human subject is physically altered by the material environment. I think this is vital for gothic and horror literature (not just eco-gothic and eco-horror), which so deeply relies on environment and space. What does it mean for the human body to enter a “haunted” house or a crime scene? Do past actions of humans (i.e.: murder, rape, pollution, etc.) also affect the physical space, just as we are impacted by it?

She quotes Richard Lewontin and Richard Levins who state that “…your body knows your class position…” and adds that “what the body of the worker can reveal” is “the ‘codetermination’ of biological and social causes, asserting that ‘whereas human sociality is itself a consequence of our received biology, human biology is a socialized biology'(36)” (27).  Thinking of my other lists, I believe that Charles Dickens presents this concept really brilliantly in a number of his novels, but in the one I’m currently reading for my Victorian list, Hard Times, it’s exceptionally clear in the character of Stephen Blackpool, who works at the mill and is described as constantly bent due to the nature of his work. This idea of the “worker’s body” and that the “body knows your class” also makes me wonder about zombies and serial killers in horror films: is the zombie a socialized body? In Dawn of the Dead, this idea is explored when the zombies naturally return to the mall, the place that they constantly went to in their “normal” life. Is the serial killer’s psychotic brain socialized and/or a product of its environment (Peter Vronsky thinks so)?