Nick of the Woods; or, the Jibbenainesay (1837) was written by Robert Montgomery Bird. It was Bird’s most successful novel was a best-seller after its release. Mark Twain references Nathan Slaughter in his 1883 Life on the Mississippi. According to The Ashgate Encyclopedia of Literary and Cinematic Monsters, Nick of the Woods is a “prominent example of the American Gothic form.” In The Columbia Companion to American History on Film, Nathan Slaughter is described as a “one-man genocide squad” and the novel is credited with popularizing the mode of broken Indian-speak (i.e.: “Me Inju-man! Me kill all white man!”). In 1838, the novel was adapted for the stage by Louisa Medina, where it premiered at the Bowery Theatre in Manhattan. It was a great success, however, it had to close after two weeks when the theatre burned down. In 1839, the show re-opened at the Bowery and, according to James L. Smith in Victorian Melodramas (1976), became “the most successful American melodrama for more than half a century.”1 Bird’s brutal and monstrous depiction of American Indians (specifically, the Shawnee) was at least partly a reaction of James Fennimore Cooper’s positive and romanticized representation in his The Last of the Mohicans. This is directly mentioned in Bird’s preface to the revised edition, in which he accuses Cooper, Chateaubriand, and Marmontel of

…throwing a poetical illusion over the Indian character…as the embodiments of grand and tender sentiment- a new style of the beau-ideal-brave, gentle, loving, refined, honorable, romantic personages-nature’s nobles, the chivalry of the forest.

Also in Bird’s preface to the revised edition is his belief that the wilderness can cause massive destabilization and degeneration in human beings, no matter to which race they belong. While explaining his more brutal depiction of the American Indian, he claims that he wrote about “real Indians.” To Bird, they existed,

…wherever not softened by cultivation,- ignorant, violent, debased, brutal.

Of course, just before this moment, Bird also claims that American Indians lack the ability to “be capable… of civilization.” Perhaps in Bird’s perception the “real Indian” only existed in a degenerated state in the wilderness.

He also discusses the white frontiersmen who, according to Bird, experienced massive destabilization (or “infection”) as a result of their life on the border between the wild and civilized society:

…men in whom the terrible barbarities of the savages, suffered through their families, or their friends and neighbors, had wrought a change of temper as strange as fearful… solitary men, bereaved fathers or orphaned sons, the sole survivors, sometimes, of exterminated households, who remained only to devote themselves to lives of vengeance; and “Indian-hating”… was so far from being an uncommon passion in some particular districts, that it was thought to have infected, occasionally, persons, otherwise of good repute, who ranged the woods, intent on private adventures, which they were careful to conceal from the public eye. 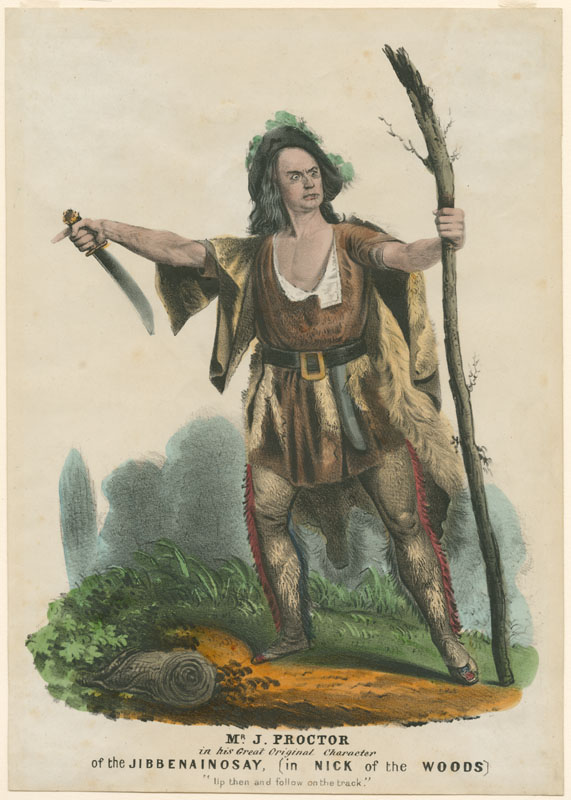 M. J. Proctor as Nathan Slaughter in a theatrical performance of Nick of the Woods

Nick of the Woods takes place in Kentucky in the 1780’s. Two cousins and lovers, Roland and Edith Forrester, are traveling to the Fall of the Ohio. Roland and Edith were orphans of twin brothers, both of whom supported the American Revolution. After the deaths of their fathers, Roland and Edith were raised by Major Roland Forrester, a stern loyalist who was initially unable to forgive his brothers for their revolutionary leanings. As a result, he put in his will that his fortune would go to a missing illegitimate daughter. However, after adopting Roland and Edith, Major Forrester changed his will so that his property would be split between the two cousins. However, when Roland joined a troop of Virginia horsemen to fight in the Battle of Yorktown, he forfeited his share of the will. When Roland returns home after the battle, he finds that the Major had died and that there was no trace of the new will, leaving Edith destitute. Richard Braxley, the Major’s lawyer, claims that the new will is nowhere to be found and instead follows the wishes of the original will, taking the inheritance into his own hands in the name of the Major’s illegitimate daughter. With no alternative, Roland decides to take Edith to Kentucky to place her in the care of a pioneer relative in the Falls while he would create a fortune from his own time in the frontier which would allow him to marry Edith. They first stop at Colonel Bruce’s station, where they meet Telie Doe, the daughter of a “white Indian” named Abel Doe and Ralph Stackpole, a renowned horse thief. They also hear the tale of the Nick of the Woods, or the Jibbenainosay, who is believed to be a devil or spirit who protects the station from outside attack by killing any American Indian who approaches the station, and leaving their corpse with his mark- a cross carved into their torso, and their head scalped. They meet Nathan Slaughter, a local Quaker who is ridiculed for his refusal to partake in battle against the American Indians near their camp.

Edith and Roland continue on their journey the following day, however, a local American Indian battle forces them to be escorted only by a single man, who is aggravated by this assignment as it refuses his participation in the battle. The guide quickly deserts the two cousins. Thankfully, Telie Doe happened to follow them and she takes up the lead as their new escort. Throughout the journey, the team encounters numerous challenges and obstacles, most notably, the continued threat of an American Indian attack. Thankfully, they also meet up with Nathan Slaughter and his dog, little Peter, who prove to be of great assistance. Peter can smell Indians and warn the team of the approaching threat, while Nathan suddenly transforms into a skilled and brutal killer of Indians. It is discovered that his entire family was murdered by the Shawnee tribe led by Wenonga. At one point, the team is captured by the Shawnee, except Nathan, who manages to first rescue Roland, then Ralph. This team then tries to rescue Edith and Telie, however, their efforts are thwarted by Ralph’s desire to steal more horses than needed, and the entire team is captured. Nathan reveals to Wenonga that he is Nate of the Woods, and finally scalps the man. The team manage to rescue Roland and Ralph from being burned alive. Edith is taken away by Braxley, but he is killed in the final battle, and she is carefully returned to Roland. The will promising the that estate of the Major to Edith and Roland is also discovered when Braxley accidentally drops it and is returned to the two cousins. 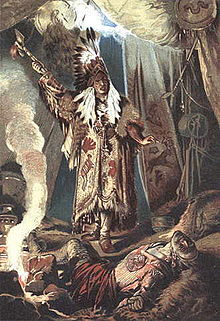 ..when the good intention was set at naught by the savage suddenly leaping to his feet, followed by a dozen others, all springing, as it seemed, out of the earth, and rushing with wild yells against the ruin. (98)

There are also a few instance of ecophobia, in which the cultivation and maintaining of nature as enacted by man is destroyed by the regrowth of the forest, signaling the death of white settlers.

…making their way through what had once been a broad path, evidently cut by the hands of man, through a thick cane-brake, though long disused, and now almost choked by brambles and shrubs;…a kind of clearing, which, it was equally manifest, had been once a cultivated field of several acres in extent… they impress the imagination with such gloom as is engendered by the sight of ruined colonnades. Such was the case with the present prospect; years had passed since the axe had sapped the strength of the mighty oaks and beeches; bough after bough, and limb after limb, had fallen to the earth, with here and there some huge trunk itself, overthrown by the blast, and now rotting among woods on the soil which it cumbered. At the present hour, the spectacle was peculiarly mournful and dreary. (85-6)

There is also a belief that characters like Nathan and Abel, although white, can never return nor belong in the civilization of the white settlements because of their interactions with the American Indians and their own brutal experiences in the American wild.

It was not indeed until the work of destruction was completed, the retreat commenced, and the army once more buried in the woods, that the demon which had thus taken possession of his spirit, seemed inclined to relax its hold, and restore him once more to his wits… “I, friend!” exclaimed Nathan, with a melancholy shake of the head; “thee would not have me back in the Settlements, to scandalise (sic) them that is of my faith!  No, friend; my lot is cast in the woods, and thee must not ask me again to leave them…The meat that feeds me, the skins that cover, the leaves that make my bed, are all in the forest around me, to be mine when I want them and what more can I desire? (236-7)

“That’s no trusting the critter, Tiger Nathan,” said Ralph; “though at a close hug, a squeeze on the small ribs, or a kick up of heels, he’s all splendiferous. Afore you see his ugly pictur’ ag’in, ‘tarnal death to me, stranger, you’ll be devoured; the red niggurs that won’t make two bites at you…” (111)

“Long-knife big fool,- Piankeshaw eat him up!” cried, the old warrior, now releasing the soldier’s throat from durance, but speaking with tones of ire and indignation: “shall see how great Injun fighting-man eat up white man!” (122)

A fire was struck, the horse flesh stuck upon a fork and roasted, and a share of it tendered to the prisoner; who, sick at heart and feverish in body, refused it with as much disgust as he had shown at the whisky, expressing his desire only to drink of the spring, which he was allowed to do to his liking. (137)

The hubbub increased, the shouts became more frequent and multitudinous, and the village for a second time seemed given up to the wildest and maddest revelry, to the sway of unchained demons, or of men abandoned to all the horrible impulses of lycanthropy. (205)

Abel: “…the end was, I turned Injun, jist as you see me; and a feller there, Tom Bruce, took to my little gal out of charity; and so she was bred up a beggar’s brat, with everybody a jeering of her, because of her d—-d rascally father. And, you see, this made a wolf of me; for I couldn’t bring her among the Injuns…” (210)

And with that, leaping upon the astounded chief with rather the rancorous ferocity of a wolf than the enmity of a human being, and clutching him bu the throat with one hand, while the other he tore the iron tomahawk from his grasp, he (Nathan) bore him (Wenonga) to the earth… (220)

Upon this pillar, and on the slender rafters, were laid or suspended sundry Indian utensils o the kitchen and the field, wooden bowls, earthen pans and Brazen pots, guns, hatchets, and fish-spears, with ears of corn, dried roots, smoked meats, blankets and skins, and many articles that had perhaps been plundered from the Long-knives, such as halters and bridles, hats coats shawls, and aprons, and other such gears among which was conspicuous a bundle of scalps, some of them with long female tresses, the proofs of the prowess of a great warrior, who, like the other fighting-men of his race, accounted the golden ringlets of a girl as noble a trophy of valor as the grizzled locks of a veteran soldier. (188)

Nick of the Woods; or, The Jibbenainesay (1837) by Caitlin Duffy is licensed under a Creative Commons Attribution-ShareAlike 4.0 International License.