Although it was released in 2002 in the UK (and in 2003 in the US), it was filmed in 2001. This meant that, although there are many plot points in the film which seem to point towards terrorism and the 9/11 attacks, the script was written before this event and filming occurred on September 11th, 2001. In fact, Boyle related to an interviewer how strange and eerie it felt to film the scene in which Selina and Jim first meet Frank and Hannah in their apartment and hold a little celebration.

This is the first film to feature zombies that run rather than walk or stagger. In fact, Boyle made sure that they casted athletes in the roles of “the infected” to make them appear faster and stronger. 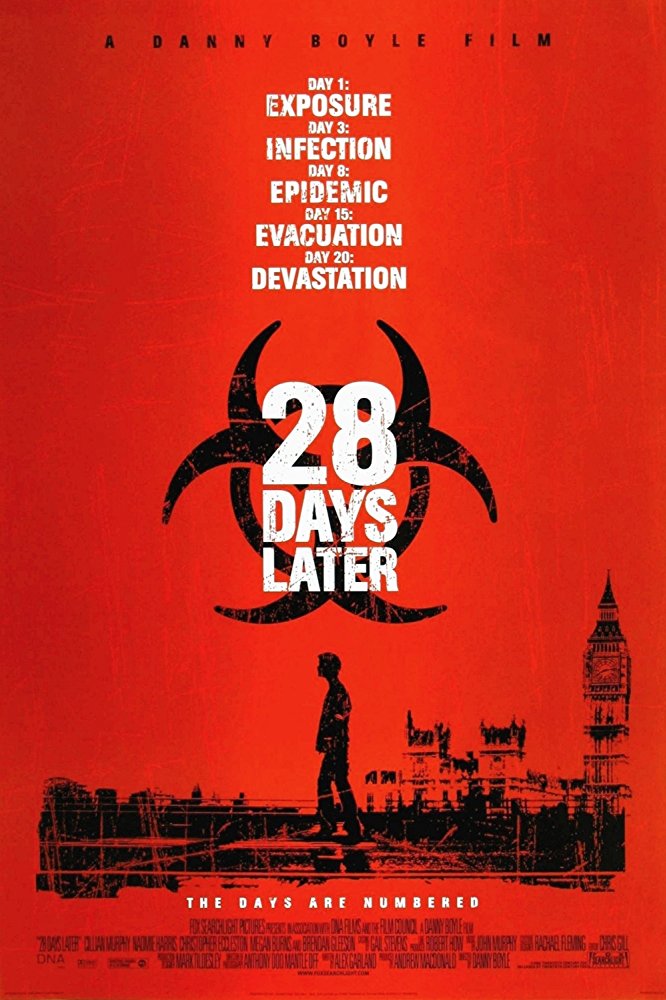 The audience is first introduced to patient zero: a chimpanzee who is tied down in a laboratory and forced to watch videos of human violence. A group of animal rights activists try to set the chimpanzees infected with the rage virus free. A scientist warns them against this move, but one of the activists opens a cage and she is immediately attacked and bitten by the chimp. She becomes infected and begins to attack the others.

28 days later, Jim wakes up alone in a hospital after sustaining a head injury he received from a car accident while working as a food delivery bicyclist. Nobody is in the hospital, so Jim dresses himself in scrubs and walks out into the streets of London, which are equally empty and covered in litter and souvenirs. He eventually walks into a church, where he encounters a number of dead bodies, as well as three zombies, including a priest. The priest zombie attacks him, but Jim hits him with a plastic bag full of soda cans, a move which Jim, who still believes that this is a normal priest, immediately regrets. He runs away, but is chased by the infected. He is rescued by Selina and Mike, two other survivors of the rage virus epidemic. England had been evacuated and the British government has been destroyed while Jim was in his coma. Jim insists that the trio go to his parents’ house to see if they’re still alive. He finds them dead, apparently they committed suicide together by poison rather than face the rage virus. An infect jumps into the house at night and bites Mike. Selina immediately kills him with a machete because she claims that he would definitely turn into an infected. She tells Jim that she would do the same thing to him if he ever gets bit. Jim claims that he wouldn’t be able to do that. They notice Frank’s apartment because of the Christmas lights he has blazing from his window. They go to his apartment and meet Frank and his teenage daughter Hannah. They are running low on water because it hasn’t rained in a week, but they hear a radio broadcast supposedly from the British military, promising safety and the cure for the rage virus. This signal claims to come from an outpost in Manchester. The four survivors get into a cab car and drive to Manchester. They stop in an abandoned grocery store and enjoy the experience of taking whatever they want. Once they get to the outpost, however, it appears abandoned and empty. Frustrated, Frank walks away from the group. A bird pecking at a zombie’s flesh from above causes a drop of the infected blood to fall into Frank’s eye. He becomes infected. Jim hesitates killing him, and Frank suddenly dies of gun shots he receives from the initially unknown source of a group of hidden soldiers. These soldiers were the ones who sent out the message, however, as the remaining three survivors quickly learn, the safety they offer comes at a cost. They have an infected soldier chained up outside of the Victorian mansion they are living in in hopes to learn something about the disease, or at least to learn how long it will take for the infected to starve and die. Additionally, the commander apparently “promised women” to his lower ranking officers after having discovered one of them trying to commit suicide. Hannah and Selina, therefore, are to be used for repopulating England. Jim tries to help them escape, but they are stopped. He, as well as another soldier who tried to help Jim to get the women out of the mansion, are taken outside, with their hands tied, to be shot. Jim manages to hide in the pile of other corpses and climb over the wall protecting the mansion. He returns, however, to wreak vengeance on the soldiers and save Hannah and Selina. He manages to do this by releasing the chained zombie and graphically killing a number of the men himself. Jim is shot near the end of his rampage, but Hannah and Selina take him to a hospital where Selina is able to treat his wounds. They find a cottage in the English countryside, where the three live together. Jim and Selina appear to be a couple and behave as parents to Hannah. Selina is in the process of sewing when the sounds of a plane cause Hannah to get Jim and Selina to come outside. They place the final bit of sewing Selina was working on (an “O”) next to the other clothe letters (“HELL”) in order to spell out a large “HELLO” for the plane driving by to see. 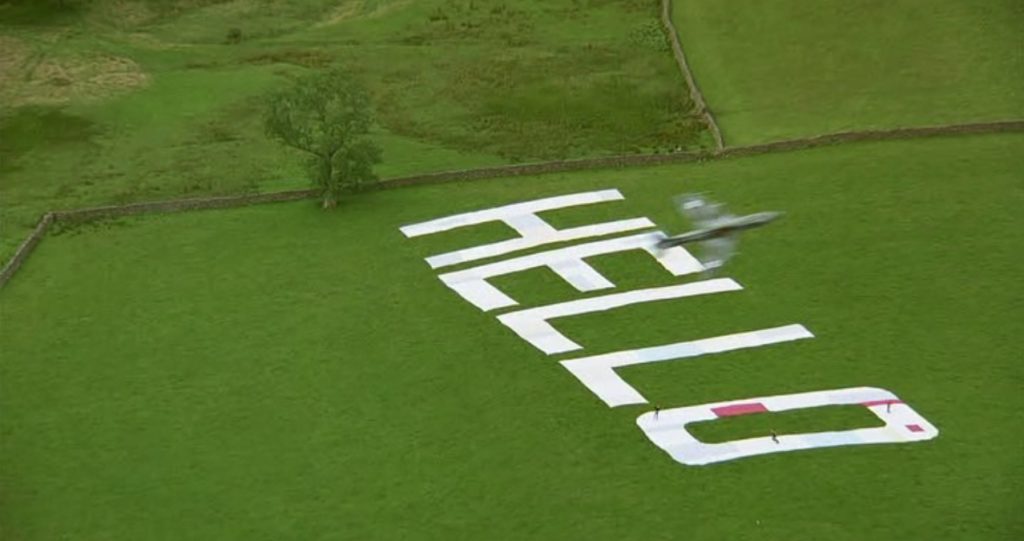