The Ritual was based off of the 2011 Adam Nevill novel of the same name (which is on my ‘to-read-after-my-oral-exams’ list). The film, directed by David Bruckner, premiered at the 2017 Toronto International Film Festival, during which Netflix purchased its international distribution rights for $4.75 million. Netflix released the film on February 9, 2018. It was also theatrically released in the UK by eOne Films on October 13, 2017. There is curiously little information regarding the production of The Ritual online. Maybe it’s just too soon after its release. For example, I can’t find its budget and the IMDB trivia page is sparse and contains information almost exclusively about the Norse mythology represented in the film. 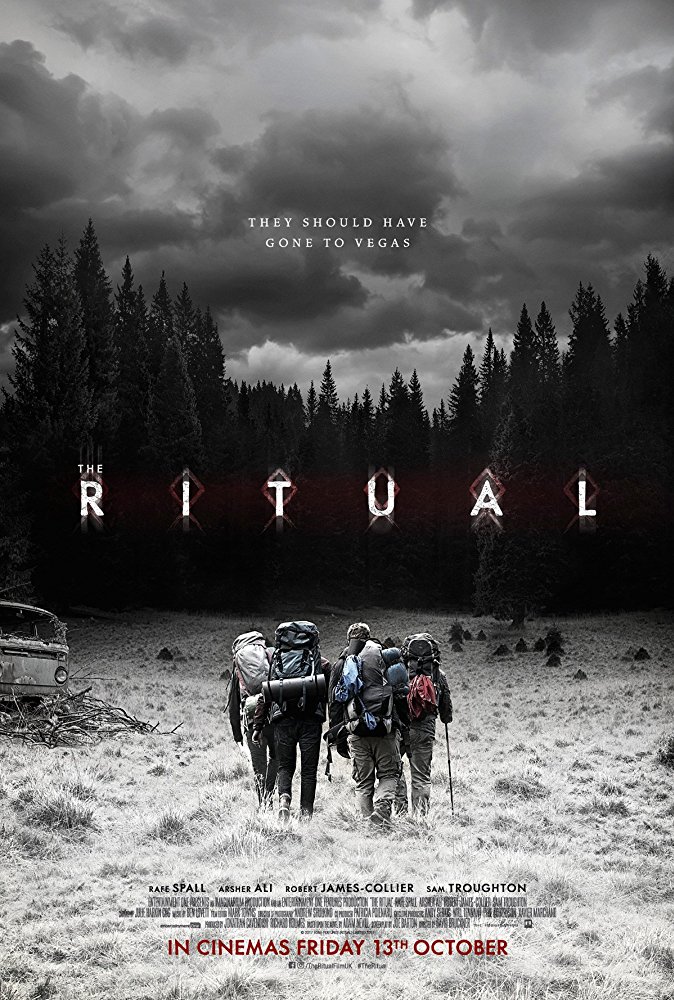 After Robert (Paul Reid) is murdered in a liquor store, his four friends decide to go on a lads’ holiday to a hiking trail in northern Sweden in his memory. Luke (Rafe Spall), one of the four friends, finds it continuously difficult to enjoy the trip due to his overwhelming guilt at being unable to prevent Robert’s murder. Although Luke had been with Robert in the liquor store, he hid from Robert’s attackers while Robert was beaten to death. After one member of the hiking party, Dom (Sam Troughton), injures his knee, the hikers take an off-trail short cut.Unfortunately, this proves to be anything but a short cut. They quickly get lost, and all of their hiking gadgets which they purchased prior to the trip (memory foam boots, new tents, jackets, a map and a compass) fail to keep them safe. Night falls and they still haven’t found their way out of the woods. To make matters worse, it begins to run, but they find a spooky, empty cabin. Upon entering the cabin, they find weird pagan-like signs surrounding and within the cabin, including an antler-bearing shrine on the second floor. They try to sleep, but when they wake up, Hutch (Robert James-Collier) has peed himself, Phil (Arsher Ali)  is found naked, praying to the statue, and Luke is standing outside with what appears to be bloody antler wounds on his chest. They continue on the hike, but remain lost. Hutch is kidnapped by some unknown entity in the middle of the night. The party starts to emotionally and mentally dissolve. Dom accuses Luke of allowing Robert’s murder to happen. Phil is taken away. Each time someone disappears, they find his body hanging, gutted, from the tree. Luke and Dom are the only two remaining. They learn that it is some sort of monster that is chasing them through the forest. They try to make a run for it after Phil is taken, but they wake up chained up in a cabin. It is a group of Pagans in the middle of the forest who worship a Nordic God (the Jötunn). The two tourists are told that they will be sacrificed to this god. Dom is taken first and is killed by the Jötunn. Luke breaks out of his chains and goes on a killing spree, killing as many of the Pagans as he can, including those who are nothing more than skeletons (the god provides them with eternal life, but I guess it can’t prevent their bodies from aging and decomposing). Luke refuses to bow down to the Jötunn and is chased by the god all the way to the edge of the forest. Once Luke passes out of the forest, the Jötunn can no longer chase him. He walks to the resort, alone, bloody, and terribly transformed.

The liquor store appears in the forest.

If you look close enough, you can see the Jötunn’s hand.

The hikers are completely consumed by the surrounding wilderness.

Again, it’s hard to find the humans within these shots of the wild.

The Ritual (2017) by Caitlin Duffy is licensed under a Creative Commons Attribution-ShareAlike 4.0 International License.