Unlike Night of the Living Dead which came out just before the parental rating systems, Romero had to fight against Dawn receiving the “X” rating, because Romero knew that this would mean a very limited release. In the end, Dawn was released without a rating, however, there was a warning attached to the end of the trailer stating that although the film contained no “explicit sex,” there was a good deal of violence. Nobody under 17 years old would be admitted into the theatre to see Dawn for this reason.

All of the mall scenes were filmed on location at the Monroeville Mall in Pennsylvania, which was, at the time, the largest mall in the United States. They filmed at night so that the mall could continue operating during the day. The filming had to pause filming during the Christmas season because of the decorations. Apparently a number of the zombie actors would get drunk at the mall bar (featured in the background of the film) while they were living in the area. One night, they got so drunk that they destroyed one of the mall’s columns with a golf cart.

Tom Savini was able to do the make-up and special effects for Dawn (he was supposed to also do make-up for Night but he was drafted as a photographer for the Vietnam War while Night was filmed). Savini also played one of the biker gang members and worked as one of two voluntary stunt men when there was no money to afford actual paid stunt men. During one of Savini’s stunt falls over the mall’s second floor railing, he slightly missed the cardboard mat he created, causing him to remain in a golf cart for a few days of filming. Supposedly, Savini wasn’t completely happy with the way his grey zombie make-up (it looks too blue) and fake blood (too vivid) looked photographed, however, Romero felt they were perfect since he wanted Dawn to feel like a comic book. 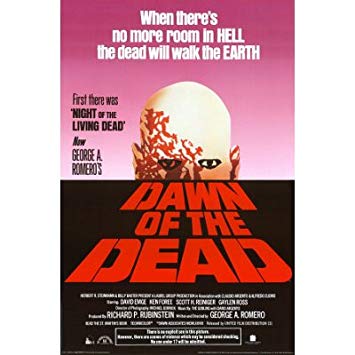 The story opens some time after the ending of Night of the Living Dead. In a Philadelphia TV station, Stephen and Francine decide to run as the situation worsens, after all, the TV channel for which they work is shutting down to only broadcast pre-recorded emergency messages. They meet up with Roger and Peter, two special policeman who just experienced a horrific SWAT evacuation of a housing project. In this housing project, many family members of the apartment-dwellers were placed into the basement after they turned into zombies. Those living in the apartment didn’t want to kill their family, so they decided to keep them in the basement instead just in case a solution was discovered. Roger and Peter were given orders to move people to rescue stations, however, once they meet Stephen and Francine, the four decide to steal the TV station’s helicopter and fly west to try to find a safe space. Francine, in particular, wants to flee to Canada. On their flight across Pennsylvania, they must stop repeatedly for gas, a fact which puts them into danger. Eventually, they find a deserted mega-mall in Monroeville, just outside of Pittsburgh. They decide to stop their in order to fuel up and get more food and supplies. While there, however, Roger and Peter discover how nice it is to shop around for technology and clothing without having to pay for it. They decide to stay in the mall until the zombie crisis ends. They work to clear the mall of zombies and board the entrances with tractor-trailers. Stephen reveals to the other two men that Francine is pregnant. Peter offers to perform an abortion if Stephen wants, which Francine overhears. The next day Francine tells the men to not treat her any differently because she is pregnant. She also tells Stephen that she wants to learn how to fly the helicopter just in case if something should happen to Stephen (currently the only member of the team who knows how to fly the helicopter), she would be able to get the survivors out. At one point, Roger gets bit by a zombie in the leg, but he ties off his leg so the blood won’t get infected. However, Roger steadily gets more and more sick, until he becomes a zombie himself. Peter shoots Roger immediately, just as Roger asked him to do if he changed. The three remaining members of the party grow bored. Stephen proposes to Francine, but she rejects the offer, saying it doesn’t mean anything in these circumstances. Eventually, a biker gang discovers the mall and attacks the place, looting and destroying everything, throwing pies in the faces of zombies, and allowing more zombies to trickle into the mall. The trio try to fight against the gang, and manage to get them to flee the mall, however, Stephen is turned into a zombie. Francine and Peter leave the mall on a helicopter after it becomes too over-run by the undead. 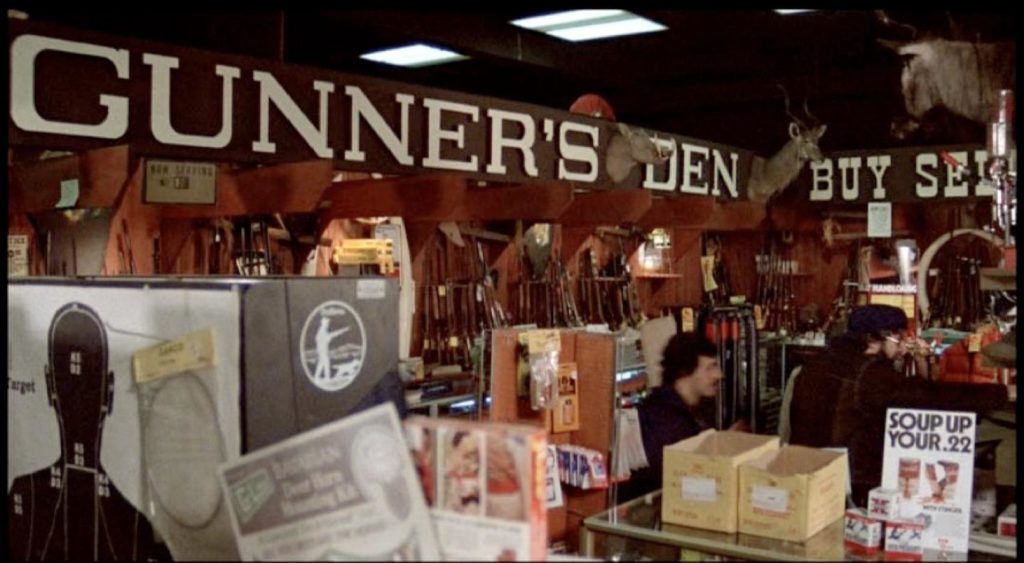 Once the bikers enter the mall, consumerism is on full display. The bikers take things not to enjoy them, but simply to destroy them (perhaps the true definition of consumption). At one moment, they even rip the jewelry off of one of the undead, however, I wonder what the point of this is… if society has been destroyed by the zombie epidemic, then money and other ‘valuable’ items like jewelry should have lost their value. Perhaps the bikers are returning to their old habits, just like the zombies? 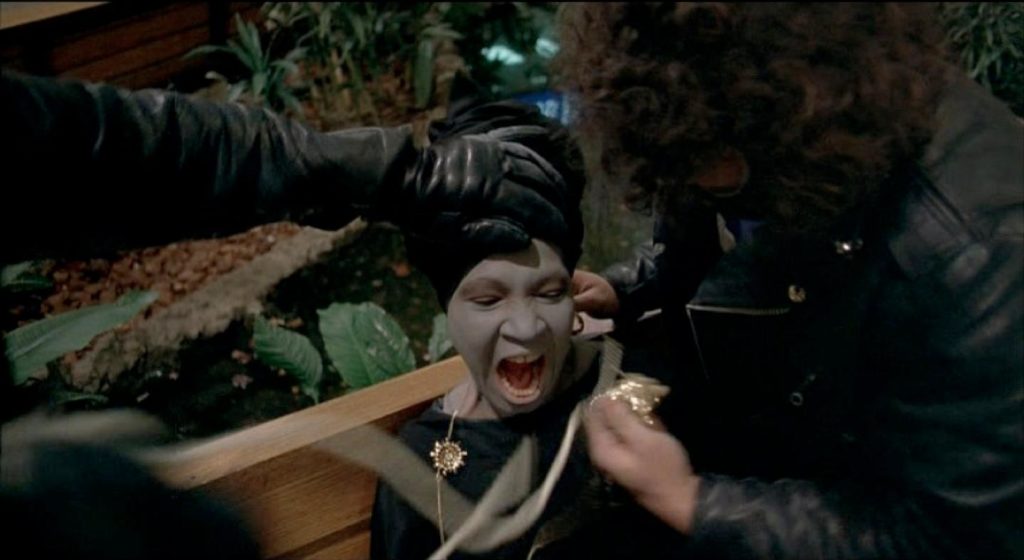 Bikers rip jewelry off of one of the undead

I also found this moment between Francine and “baseball zombie” to be really stunning (seen screen-grab below). He is filmed in such a way so that the audience views him as human, or at least once-human. We see his face closely, and he wears a sad, pitiful expression. He locks eyes with Francine and the two share what seems like a sympathetic moment. This is able to happen because Francine sits inside the glass of one of the mall’s shops, while the zombie sits outside of the glass in the mall’s hallway. Since the zombie’s main purpose is to consume human flesh, this moment has a second layer, in which the zombie stares at Francine as if she were another commodity within the store window that he longs to own, but is just out of reach. 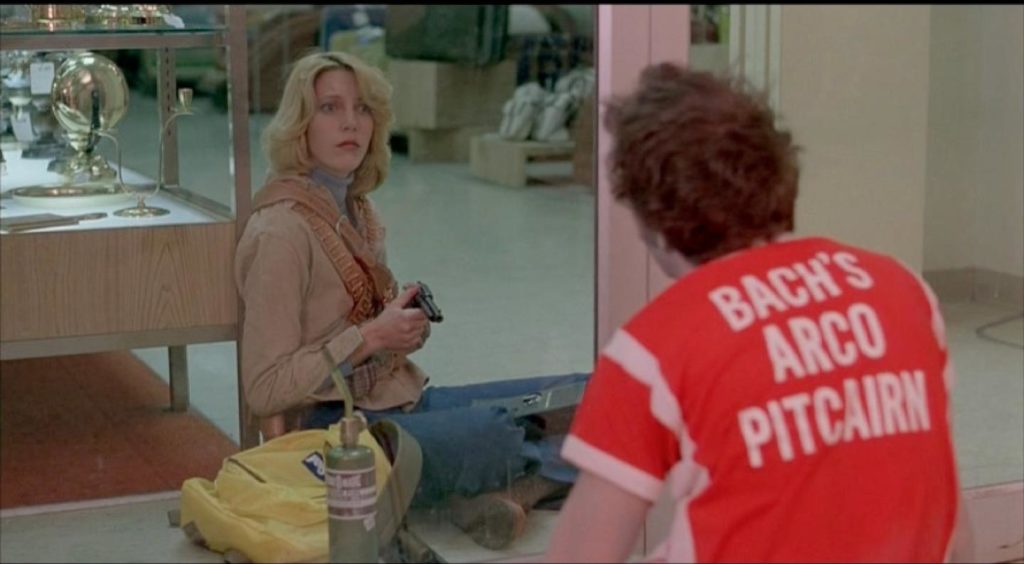 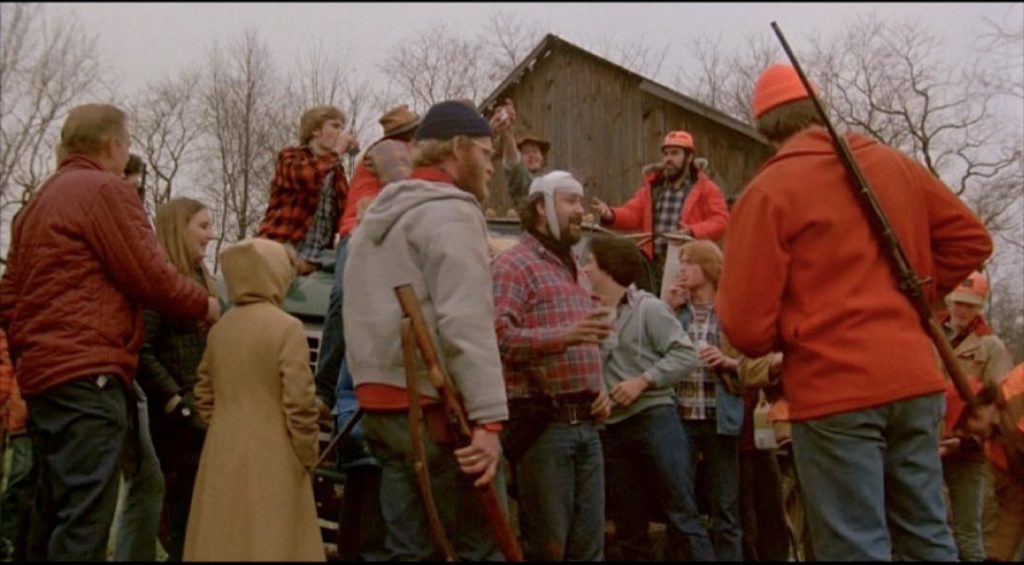 Dawn of the Dead (1978) by Caitlin Duffy is licensed under a Creative Commons Attribution-ShareAlike 4.0 International License.