Splinter (2008) is an independent horror film directed by Toby Wilkins. It received a fairly good critical reception despite its limited release, earning an average rating of 6.3/10 on Rotten Tomatoes, indicating “Fresh” and won six awards at the Screamfest Horror Film Festival. Although I was unable to find its budget, Splinter earned $9,517 during its opening weekend in America. 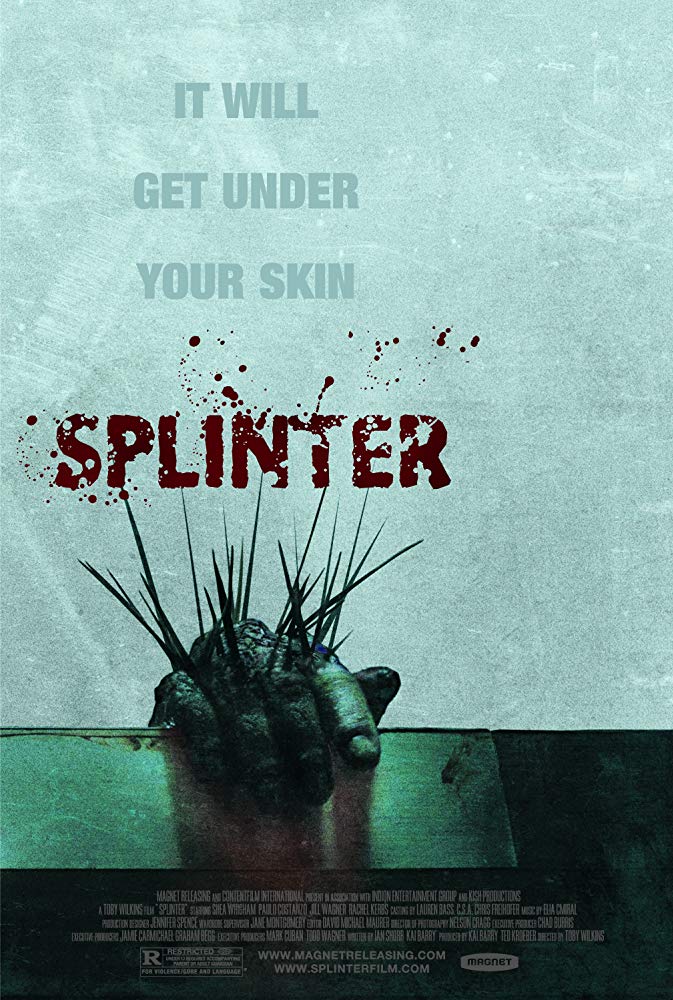 After failing to enjoy their anniversary camping trip as planned due to a damaged tent, Polly Watt and boyfriend Seth Belzer decide to drive to a nearby low-budget motel instead. On the way, they run into two criminals on the run to Mexico, Lacey Belisle and Dennis Farell, whose runaway car has broken down. The criminal duo takes the car and the couple hostage, forcing them to drive towards their destination. Suddenly, Polly, who is driving the car, hits something on the road bad enough that they need to replace a tire. While doing this, they notice a strange road kill- Lacey claims that its her lost dog, but the thing looks dead and completely unrecognizable. When the animal moves and attacks them with a weird splinter, the group quickly gets back in the car and drives on. More difficulties emerge when the car begins to overheat, which leads them to stop at a gas station for help.  Lacey goes to the bathroom (most likely to do drugs), but instead finds a zombie-corpse, which attacks her, passing on the virus. The three remaining members of the group are stuck in the gas station, where nobody seems to be working (the corpse in the bathroom was the sole attendant). While trying to come up with different methods of escaping, a cop appears to arrest Dennis, however, the zombie on the roof of the gas station jumps down and kills the cop. Seth, who is emasculated throughout most of the film by Dennis, suddenly puts himself into Dennis’s esteem when he proves himself capable of amputating Dennis’s infected zombie arm (Seth is a biology Ph.D. student). Seth also realizes that the zombie virus is alive and is able to locate its prey (human bodies) by detecting and following heat. Seth lowers his body heat and walks to the car, mostly unnoticed by the zombie. In the film’s final confrontation with the monster, Dennis is killed sacrificing himself to protect the couple. He hands them a key to a lock box in a bank and makes them promise to use it to give the “nest egg” to a trucker’s wife who he had harmed in the past. 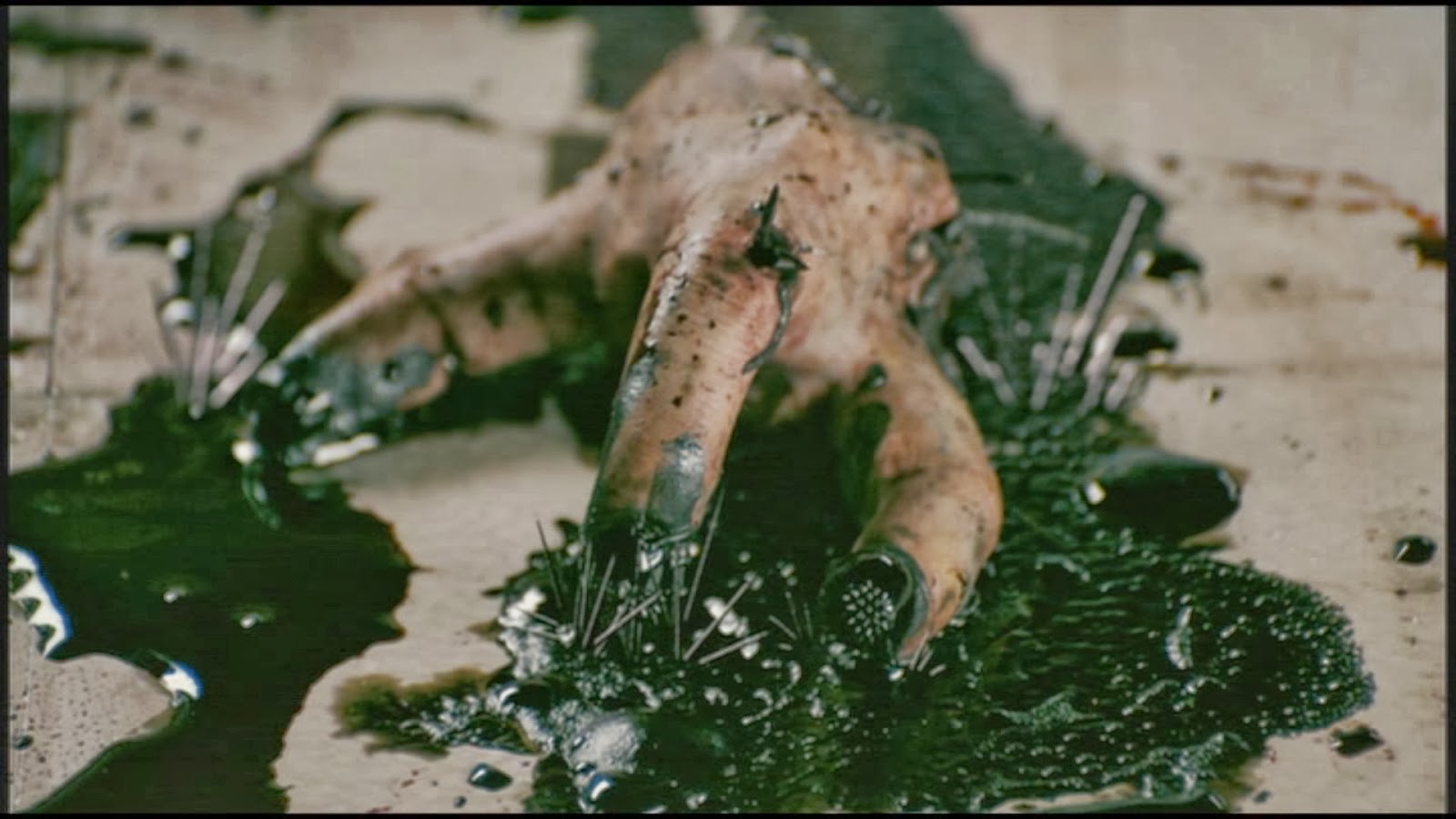 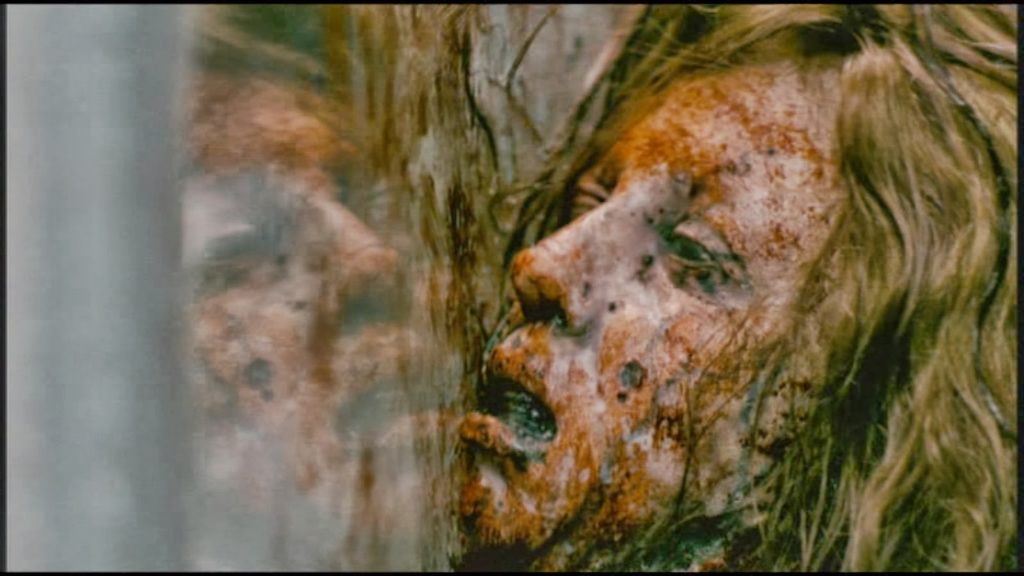 Lacey’s corpse, covered in the oil-like virus and her own blood

It’s hard to determine what is blood and what is the oil-like virus on Dennis’s hand.

Splinter (2008) by Caitlin Duffy is licensed under a Creative Commons Attribution-ShareAlike 4.0 International License.