Funny Games (2007) is a shot-by-shot remake by Micheal Heneke of Michael Heneke’s Austrian Funny Games (1997). The film follows the original thoroughly, which was accomplished partly because the production crew used the 1997 blueprints to ensure that the house featured in the American remake had the same proportions as that of the original set. 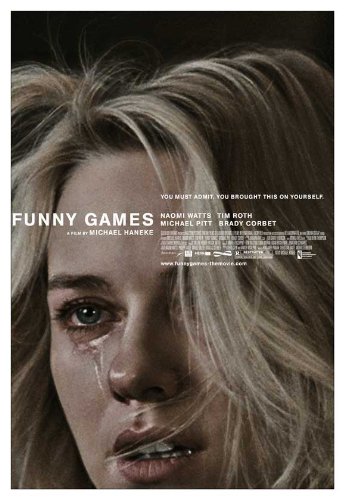 George Farber (Tim Roth), his wife Ann (Naomi Watts), their son George (Devon Gearhart) and their dog arrive at their lake house for what promises to be a nice vacation. On their drive in, they stop by their friend’s lake house and see him standing on the lawn with two young men who appear to be their friends or relatives. One of these young men, Peter (Brady Corbet) appears in the Farber kitchen soon after George and George Jr. go off on their boat, leaving Ann behind to cook. Peter asks Anne for some eggs. The atmosphere quickly becomes tense when Peter repeatedly finds reason to stay in the kitchen, breaking the eggs “by accident,” and “accidentally” dropping Ann’s cell phone into the sink water. All through this moment, he repeatedly comments on how nice Ann is. Once Peter seems to have left, Ann relaxes a bit, but after hearing something outside, she pokes her head into the hallway to see both Peter and the other young man, Paul (Micheal Pitt) standing there. Peter tells Ann that her dog attacked him, making him once again loose the eggs. When Ann refuses to give him anymore, Peter and Paul tell her that she is being very rude and unkind. Paul asks to borrow one of George’s golf clubs and goes outside with it. When Paul returns, Ann continues to refuse to give them more eggs and finally asks them to leave, a request which they refuse. George and George Jr. return home and Ann tells George that she was trying to get them to leave. The two young men, however, tell him that Ann was being very rude to them. George chooses to believe the two young men over his wife. He quickly learns that the two young men are malicious, and tries to force them to leave. Peter breaks George’s leg with a golf club and the two take the family hostage. Paul reveals that he killed the family dog with the golf club. Peter and Paul explain to the family that they are going to play a series of sadistic games in order to solve a bet: they bet that the family won’t survive the night (12 full hours, 9pm to 9am) and the family must wager that they will survive. Ann is forced to strip in front of the men in order to prove that she has no “jelly rolls.” At one point, George Jr. manages to escape to the neighbor’s house, only to find that everyone there is dead. However, George also finds a shotgun, but he doesn’t realize that it isn’t loaded. Paul finds George Jr. and takes the gun from him, while revealing that he has bullets. After bringing both the gun and George Jr. home, Paul leads the family in another game, in which Peter counts out the members of the family and whoever gets counted out will be shot. George Jr., however, panics, and makes a run for it, but is shot immediately by Peter. Paul gets upset with Peter for not properly following the rules of the game, and the two leave. Ann and George try to get the cell phone to work by drying it off with a blow drying, but they don’t reach much success. Since George has a broken leg, he stays in the house with the cell phone, but Ann goes outside to try to find help. Unfortunately, as she runs down the quiet street, she almost immediately notices a car with its lights on, facing her direction. This turns out to be the vehicle of Paul and Peter, who catch her and bring her back home. They play another game: Ann must choose who gets killed first and with which weapon: the shotgun or the knife. Unable to make the decision, she weeps, but also manages to quickly snatch the shotgun away from Paul and shoot Peter. Paul “rewinds” the movie, instead keeping the gun away from Ann and shooting George. Peter and Paul next take Ann out onto the family sailboat. Despite the fact that Ann still has another hour to win, Paul feels hungry, so he pushes Ann, whose hands and feet are tied together and mouth is taped shut, off the boat to die by drowning. The two men then dock the boat near the house of George and Ann’s friends. It looks like they’re going to start a new set of games with this family.

Additionally, during the scene in which Peter and Paul explain the “game” to the Ferber family, the two “teams” are each seated on a couch, facing each other. Notice below how much closer we are positioned in the Peter and Paul view versus how distant we are from the Ferber point of view. I’m not sure how much this came into play in Heneke’s decision-making of this scene, but I also felt like there was an extra meta layer here because, I too, was sitting on my couch watching these people who were also sitting on the couch. 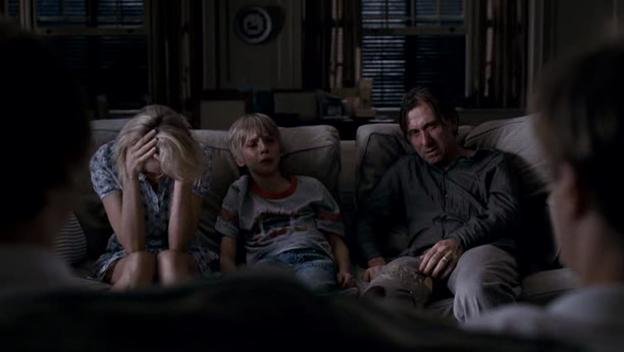 The camera basically sits in between Paul and Peter in order to watch the Ferber family suffer. 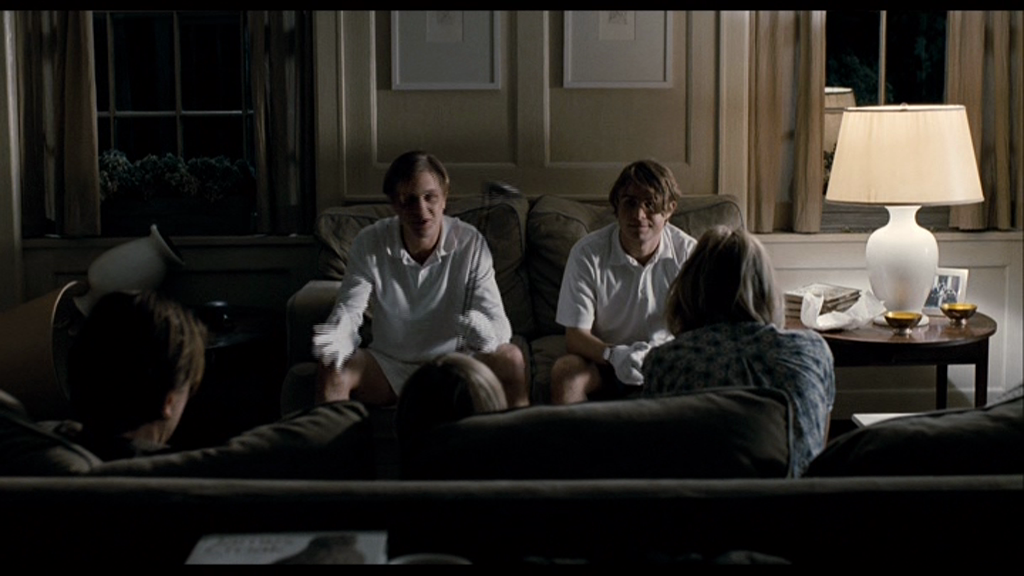 The camera stands pretty far behind the Ferber family in order to watch Peter and Paul explain the bet.