The Narrative of Arthur Gordon Pym (1838)

The Narrative of Arthur Gordon Pym (1838) is Edgar Allan Poe’s only complete novel.

After having a collection of short stories turned down by the publishers at Harper & Brothers who claimed that readers wanted longer, simple stories like novels, as opposed to short complex tales, Poe decided to write a novel. Poe first arranged to have The Narrative published in serial installments by Southern Literary Messenger, however, in early 1837, Poe left his position at Messenger (some say he was fired), leading him to temporarily abandon the project. After a period of unemployment, Poe picked up the project again, deciding to set the novel in 1837 and include a voyage to Antarctica in order to capitalize on the public’s interest in the topic. Poe originally intended to craft a realistic story and was inspired by numerous real-life accounts of sea voyages, as well as his own sea experiences. The novel was finally published in book form in July 1838 by Harper & Brothers. It did not include Poe’s name and was instead presented as the work of Pym himself (which the prologue further encourages). Poe claimed that the early serialized version of the novel was mistakenly attributed as a work of his own fiction, instead claiming that he merely helped the sailor to write down his story. A few months later, a British edition was published without Poe’s permission, with the final paragraph omitted. This, however, first initiated British interest in Poe’s work.

Most contemporary reviews of The Narrative were unfavorable. Many critics disliked the excessive violence and gore, as well as its considerable amount of inaccurate descriptions of nautical life and geography. Poe later agreed with these critics at least partly, stating that his novel was “a very silly book” in a letter to William Evans Burton.

Some other critics, including a reviewer for the Metropolitan Magazine were concerned about Poe’s attempt at presenting his fiction as a true story. In their review, they argued that, “when palmed upon the public as a true thing, it cannot appear in any other light than that of a bungling business- an impudent attempt at imposing on the credulity of the ignorant.”

In 2013, The Guardian listed The Narrative as the tenth greatest novel ever written in English, highlighting its influence on the works of Henry James and Arthur Conan Doyle. 1 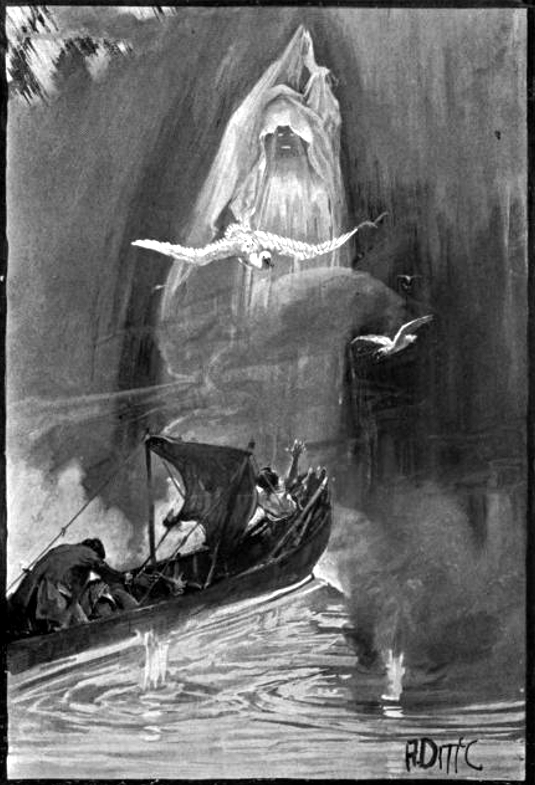 Arthur Gordon Pym is a young man living on the island of Nantucket. His best friend, Augustus Barnard is the son of the captain of a whaling ship. Arthur dreams of becoming a sailor against the wishes of his parents. Augustus helps Arthur to get on board the Grampus, a whaling vessel which his father is commanding towards the southern seas, by hiding him below deck in a cramped hold. Augustus also secretly smuggles in Arthur’s beloved dog, Tiger. The two agree upon a system by which Augustus will sneak in food and water to resupply his friend as needed until they are far enough away from Nantucket that they can safely reveal Arthur’s presence without the fear of Augustus’s father turning the ship around. Unfortunately, the hold in which Arthur hides is cramped and full of noxious vapors, causing Pym to become increasingly comatose and delirious. He is unable to communicate with Augustus when the promised supplies fail to arrive and Pym quickly finds himself without water and basically without food (he has some inedible rotten meat). Pym eventually finds a note written in blood from Augustus attached to Tiger, warning Pym to remain hidden. Finally, Augustus discovers Pym and explains all: There was a mutiny on board the ship, causing most of the crew to be slaughtered by the mutineers, including Augustus’s father. The only person left was Augustus (and Pym), who was able to survive because he befriended one of the mutineers, a “hybrid midget” named Dirk Peters who now regrets the part he played in the mutiny. Peters, Pym, and Augustus formulate a plan to take over the ship. They wait for a storm and have Pym dress in the clothes of a recently deceased mutineer to scare the superstitious sailors. They plan that the confusion created by the presence of a supposed ghost would allow them to commander the ship. All the mutineers are killed or thrown overboard except one, Richard Parker, who begs to be spared, which they do. Tiger suddenly disappears from the narrative (perhaps he dies in the upcoming storm?). The four men wether the storm as it increases in force by tying themselves to the hull of the ship. Once the storm finally abates, they find themselves completely without food, as it had all either washed over the ship or became water-logged in the office beneath the deck. The men face starvation and death. Augustus also endured a severe cut during the storm. They suddenly see a strangely moving Dutch ship with a grinning seaman on deck, apparently nodding at them as a means of greeting them. The men celebrate their salvation, until they become horrified at what really lies on the deck of the ship once it becomes close enough to see and smell: All the occupants of the ship, including the supposedly grinning seaman, are all rotting corpses. As time continues to pass, Parker suggests that one person should be killed so that the others could eat the body and survive. They draw straws, despite Pym’s deep reluctance to this plan, and Parker is sacrificed. The others gain a slight reprieve from their sufferings, but Augustus soon dies from his wounds. Also, the ship is slowly sinking. Peters and Pym are floating on the upturned hull when they are rescued by the Jane Guy, a ship from Liverpool. Peters and Pym become part of the Jane Guy‘s crew, helping to hunt seals for fur and explore the southern oceans. Pym becomes interested in sea birds and urges the captain to sail farther south into unexplored Antarctic regions. After crossing the ice barrier, they arrive on open sea and discover a surprisingly mild climate and a mysterious island named Tsalal, inhabited by a tribe of black natives that seem friendly. The chief, Too-Wit, leads the sailors on a tour of the island. The color white is strange to the island natives and disturbs them. They have never seen the color before. Too-Wit and the captain begin trading. Unfortunately, the friendliness turns out to be a false front, and the natives ambush the sailors on the eve of their planned departure. Everyone except for Peters and Pym are slaughtered. The two men hide in the island’s mountains and soon discover a maze of passages deep within the hills. They find strange markings on the walls, disagreeing whether these marks were made by natural causes or written by man. Once again, the two men face starvation due to a lack of food. Desperate, they steal a canoe from the natives, taking one native captive, and sail towards the south. The further they travel, the whiter and hotter the water becomes, until it is completely milky white and too hot to touch. They also witness a rain of ashes and a mist that seems to part to let them pass. A white shrouded figure appears and kills the native hostage and the narrative suddenly ends. A post-script explains that Pym suddenly died in an accident which most likely also destroyed the final 2-3 chapters.The publisher promises to restore these chapters to the public once they are found. Peters is alive somewhere in Illinois, but cannot be reached. 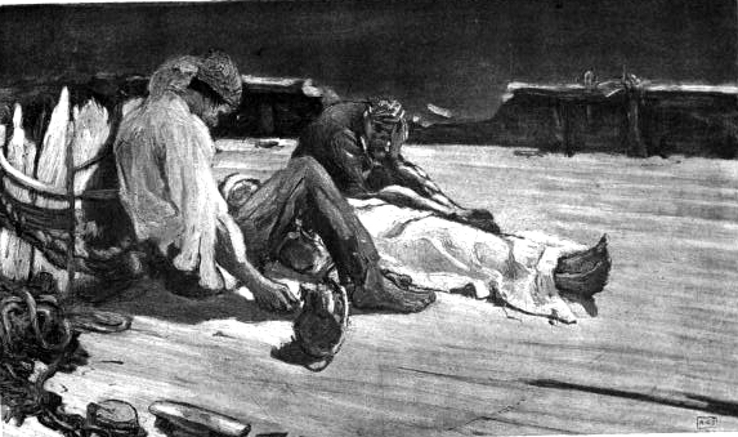 Pym’s dog Tiger is also affected by this air:

I relate these things and circumstances minutely, and I relate them, it must be understood, precisely as they appeared to us…and, all at once, there came wafted over the ocean from the strange vessel (which was now close upon us) a smell, a stench, such as the whole world has no name for- no conception of- hellish-utterly suffocating- insufferable, inconceivable. I gasped for breath and, turning to my companions, perceived that they were paler than marble…we had a full view of her decks. Shall I ever forget the triple horror of that spectacle? Twenty-five or thirty human bodies, among whom were several females, lay scattered about between the counter and the galley in the last and most loathsome state of putrefaction. We plainly saw that not a soul lived in that fated vessel!… We were raving with horror and despair- thoroughly mad through the anguish of our grievous disappointment… Deliberately as she went by, we might possibly have found means of boarding her, had not our sudden disappointment, and the appalling nature of the discovery which accompanied it, laid entirely prostrate every active faculty of mind and body. We had seen and felt, but we could neither think nor act, until, alas, too late. How much our intellects had been weakened by this incident may be estimated by the fact that, when the vessel had proceeded so far that we could perceive no more than the half of her hull, the proposition was seriously entertained of attempting to overtake her by swimming! (80-83).

The Narrative of Arthur Gordon Pym (1838) by Caitlin Duffy is licensed under a Creative Commons Attribution-ShareAlike 4.0 International License.