The Moonstone (1868) was written by Wilkie Collins and serially published in Charles Dickens’ All the Year Round. He wrote it during two very difficult events in his life: first, his mother was dying, and, secondly, he was experiencing a particularly bad case of the gout while writing Miss Clack’s narrative, causing him to have to dictate that entire section out loud while a secretary wrote it down. Additionally, these events (as well as Collins’s participation in writing a Christmas story with Dickens) caused him to fall a bit behind in producing the installments. He was not as far ahead of his readers as is typical of a serially produced novel. Much like The Woman in White, The Moonstone was written as a collection of different narratives from different characters integral to the progression of the story. 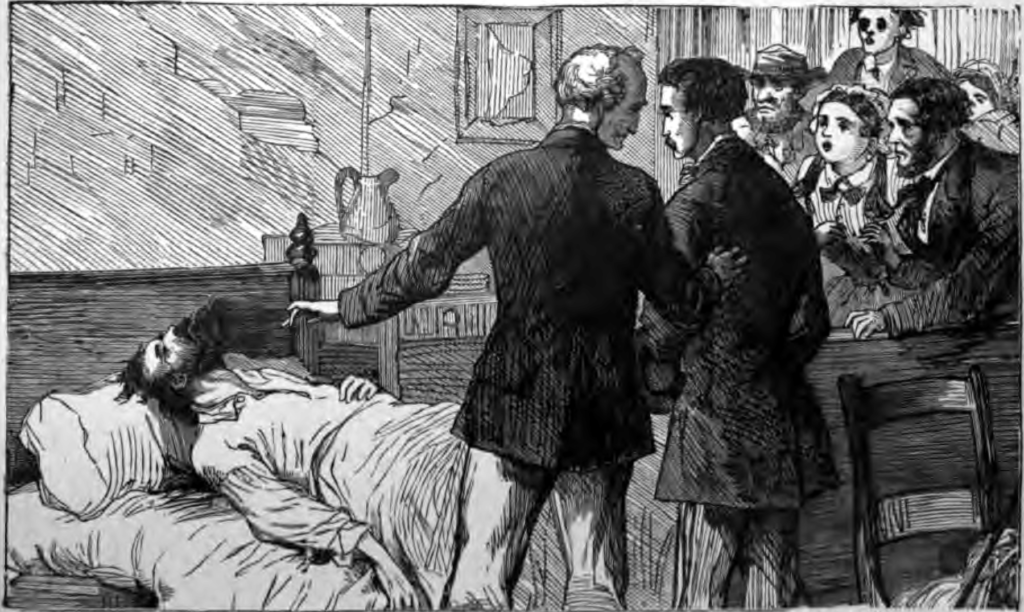 Ablewhite discovered at the inn

Rachel Verinder, a young English woman inherits an Indian diamond, known as the “moonstone,” for her 18th birthday from her uncle, a corrupt British army officer who served in India. He acquired it during the Siege of Seringapatam through a series of murder and theft. The diamond is greatly valuable, both financially and religiously. Because of this, three Hindu priests have dedicated their lives to recovering the diamond to bring it back to India. Many members of the family, including her cousin Franklin Blake and her mother Lady Verinder, believe that the diamond was given to her as some sort of insult from her corrupt uncle due to the fact that the diamond is said to be cursed, bringing nothing with it but destruction. However, Rachel is very pleased with the gift and immediately places it on her dress for all to see at the large dinner celebrating her birthday. Some Indian jugglers, along with a small English boy, arrive at the house but are quickly turned away. That night, the diamond is mysteriously stolen from Rachel’s bedroom. Suspicion is immediately placed on a number of different characters: the Indian jugglers, Rosanna Spearman, the odd maidservant with a past of robbery and theft, and on Rachel herself, who behaves suspiciously. Rachel also becomes angry with Franklin, despite their earlier mutual yet unspoken infatuation, when he goes out of his way to locate the diamond. Sergeant Cuff, a well-known detective, arrives to the house but the mystery remains unsolved. The protagonists disperse from the house party.

During the following year, there are rumors that the moonstone had appeared a London bank vault, pledged as a surety to a moneylender. Rachel grows more and more isolated and grieved, especially after her mother dies. This results in Rachel accepting the second marriage proposal of her cousin Godfrey Ablewhite, however, this engagement is eventually mutually dispersed.

Franklin Blake continues to be determined to solve the mystery of the moonstone. He returns to Rachel’s old family home and reunites with Gabriel Betteredge, the venerable head servant of the Verinders’ estate. Betteredge connects Blake with Limping Lucy, one of Rosanna Spearman’s only friends, as well as with the knowledge that Rosanna had committed suicide because of the suspicions cast upon her, as well as because of her impossible love of Blake. Lucy also hands Blake a letter written by Rosanna, which Rosanna gave to Lucy to give to Blake in person only if he came around asking about her. The letter admits the fact that Rosanna found evidence pointing towards Blake as the thief of the moonstone (his nightgown had a smear of paint on it). Because of her strong feelings towards Blake, Rosanna hid the evidence and allowed suspicion to be thrown on herself. His refusal to even acknowledge her despite all that she had done for him cause her to commit suicide.

Blake next creates a meeting between himself and Rachel in order to remove any suspicion against him from her mind. She tell him, shockingly, that she saw him steal the diamond with her own eyes! Blake returns to the scene of the crime, desperate for answers, and befriends Ezra Jennings, Mr. Candy’s assistant (Mr. Candy was the Verinder’s doctor, as well as a member of the birthday dinner party until he became dreadfully ill). Together, they discover that Blake had been secretly given laudanum during the night of the party by Mr. Candy after Blake criticized medicine. The effects of the drug were compounded by the fact that Blake doesn’t even drink alcohol. Because of the drug, as well as his anxieties surrounding the cursed moonstone being in Rachel’s position, Blake took the diamond in a narcotic trance in order to move it to a safe place. They re-enact the night’s events in order to confirm this explanation, however, it remains impossible to explain how the stone wound up in the London bank. Blake and his allies trace the money-lender and the claimant in order to discover where the stone is, tracing it to a seedy inn. Unfortunately, they discover that the Indians got to the claimant first, murdering him in his bed and stealing the diamond. It turns out that the claimant was Godfrey Ablewhite in disguise, who had stolen the diamond in order to cover up his embezzlement of a trust fund that was placed in his care.

Rachel and Blake marry. There is an epilogue from Mr. Murthwaite, the noted adventurer and friend of the Verinders. He explains that he saw the stone in India in its rightful place, in the forehead of a statue of a god. 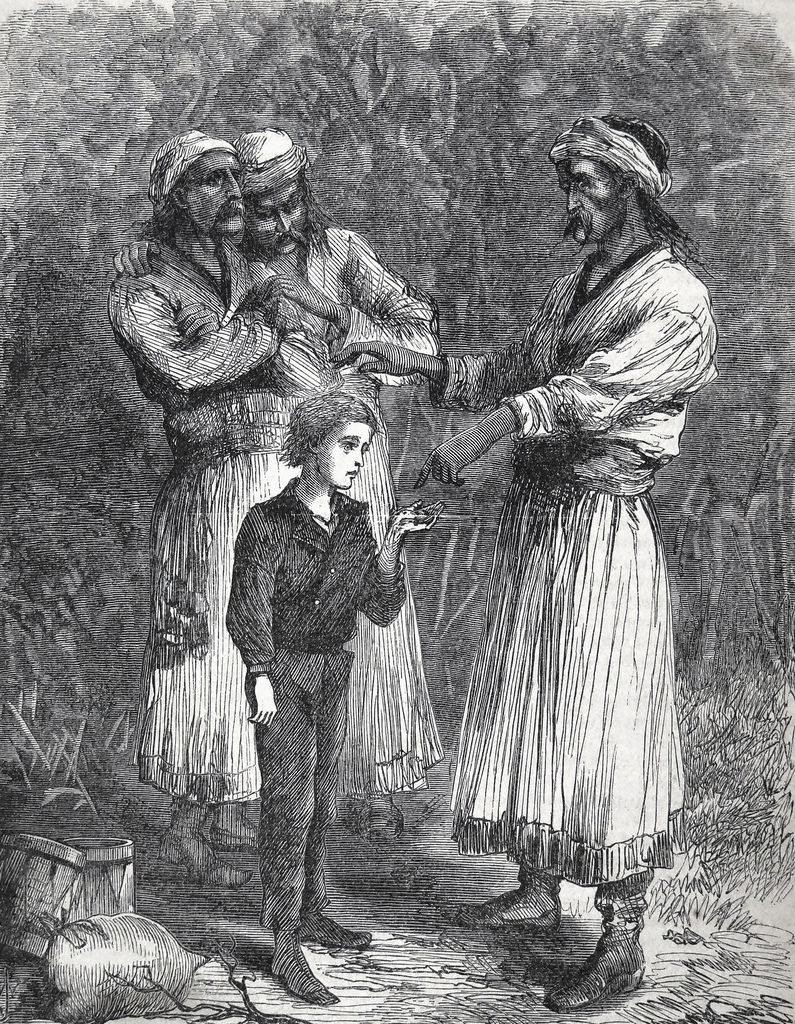 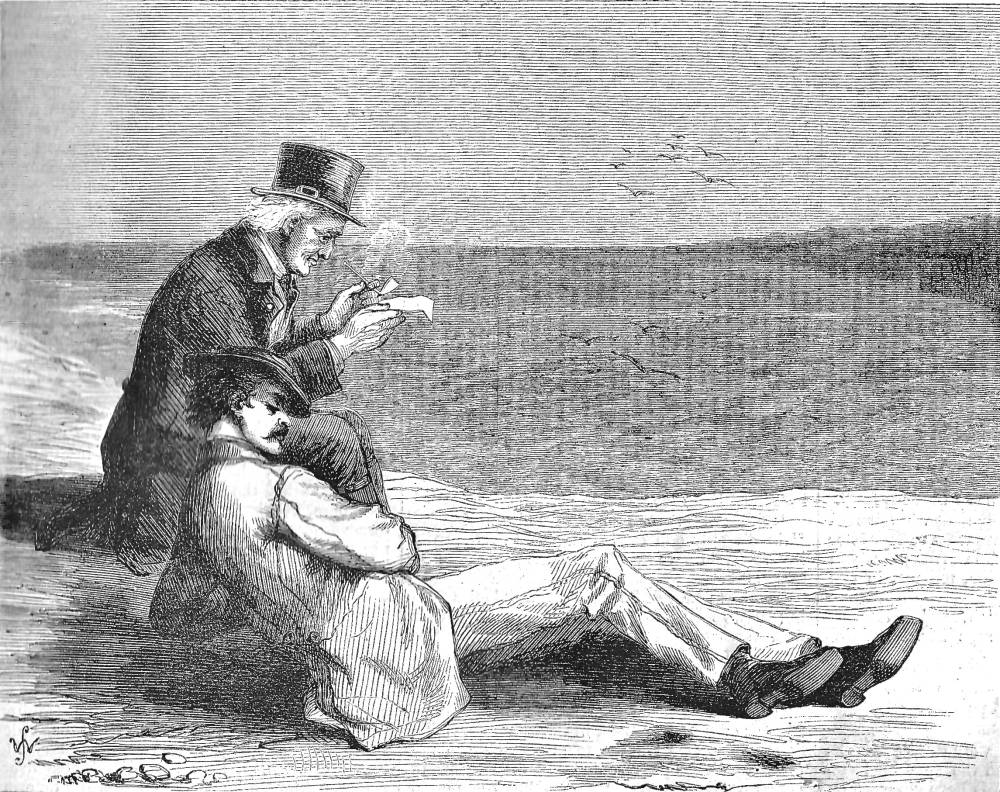 Betteridge and Blake near the Shivering Sands 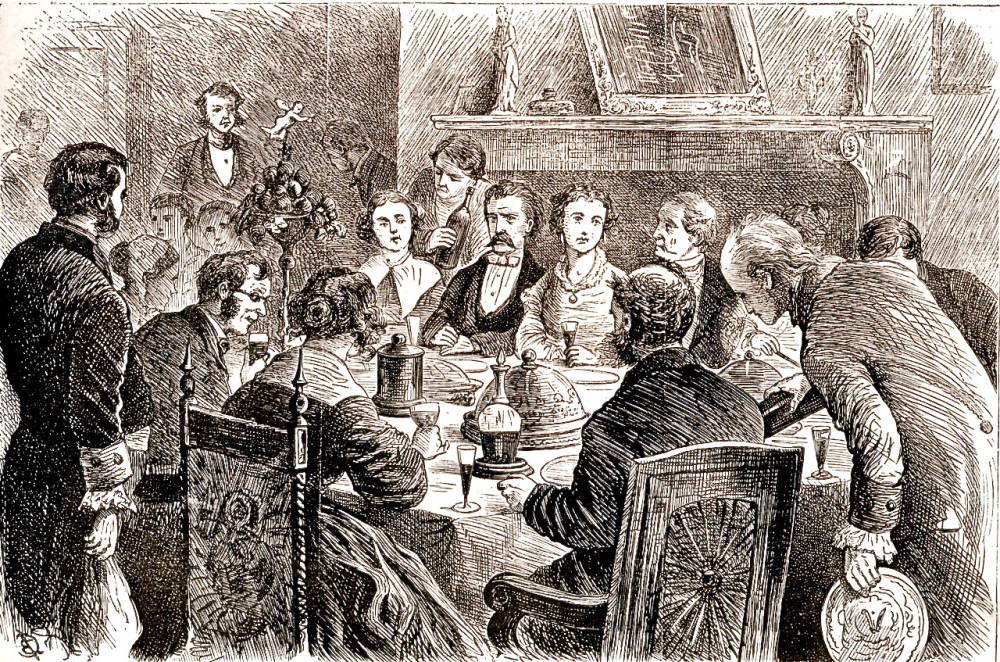 Rachel wearing the moonstone at her birthday dinner party

The Moonstone (1868) by Caitlin Duffy is licensed under a Creative Commons Attribution-ShareAlike 4.0 International License.