How can survival game films within the horror genre work to render the contemporary “subject of life interest” visible?

How can survival game films within the horror genre work to render the contemporary “subject of life interest” visible?

I also feel like these survival game films, in particular (just because of my interests), the horror survival game film, can work as a means through which audience members and fictional characters are made to escape the invisible networks, systems, and “everyday thinking” of neoliberalism. Suddenly, rather than being concerned with invisible systems of credit and debt, digital identity, and surveillance, players in the horror survival game must become hyper-aware of their material biological bodies and lives. Simultaneously, the audience is made to care deeply about the physical status of the characters rather than their status within competitive capitalist life. 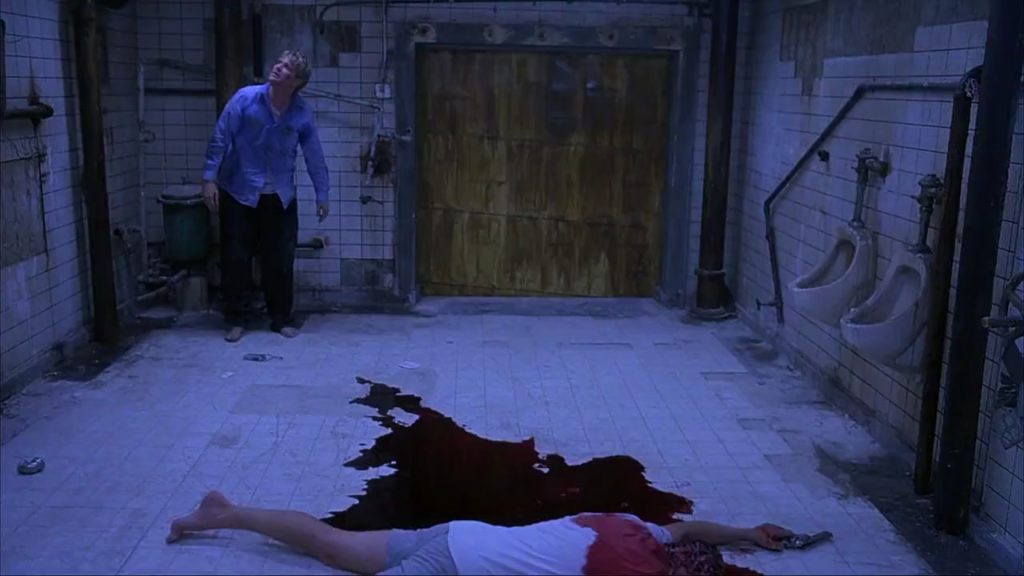 Saw (2004) is perhaps the most well known of the survival game horror films. In Saw, the traditional kill list is flipped, resulting in only men getting killed, while all of the female characters survive. I’m interested in the ways that gender, race, sexuality, and class still figure within the systems of the survival game horror film. Elliott’s concept of “life interest” is vitally important in Saw- John Kramer (aka: the Jigsaw killer) states that he chooses his victim based on their inability to truly appreciate the value of life (this motive is repeated throughout the many sequels). In the first film, Amanda, a heroin addict and one of the survivors of Jigsaw’s games, tells the police that she was able to quit heroin and learn the value of her life only through her experience as a victim of the Jigsaw killer. In the sequels that follow, Jigsaw gains a cult-like following of survivors and fans who believe he provides a powerful message and system that helps train people to love life. Kramer repeatedly tells his victims to “live or die… the choice is yours” and promises that there will be suffering, but that it is only through suffering that we can learn to truly live. This concept that there is a “choice” within his games is definitely reflective of Elliott’s concept of “suffering agency.” Characters like Amanda are only capable of gaining agency in her life through the process of extreme suffering. Similarly, in Elliott’s view of the survival game, players are forced to make a “choice” and it is through this choice that they must suffer, but that they may also survive. This idea of choice also appears in her article on suffering agency, in which characters in neoliberal-era fiction are described as having constantly to make choices that are nearly impossible to make, which for Elliott, mirror difficult decisions that neoliberal citizens must make today (medicine or groceries? student loan payments or rent?). These decisions are pushed to the extreme in films like Saw, where characters are asked to either die or kill someone else, or die or saw off their own leg. Additionally, Jigsaw’s games make visible the competitive, cut-throat, rat-race in which competitors must be willing to kill and/or disembody somebody and/or stand by and watch somebody slowly die who could’ve easily been saved in order to survive themselves. This certainly helps to make the “life interest” of the contemporary subject visible. All throughout the torture session, Jigsaw, makes sure he can constantly watch his games play out, typically installing secret peep-holes, hidden cameras, or, most famously, placing himself within the playing field disguised as a corpse.

However, Saw, as well as other films within the horror survival game genre, also allows audience members and the characters to escape these systems, as mentioned earlier. The material needs of the human body suddenly matter more than the unseen needs and demands of the neoliberal system. Even the surveillance that Jigsaw conducts is often physical- his presence is material- he sometimes presses his eye against a hole in the wall, or is actually physically present within the room itself. However, other times, he takes part in the more digital surveillance that has become the norm, watching from a control-room (unless his “assistant,” Zep is manning the room) as hidden cameras record the suffering and transmit it to him. 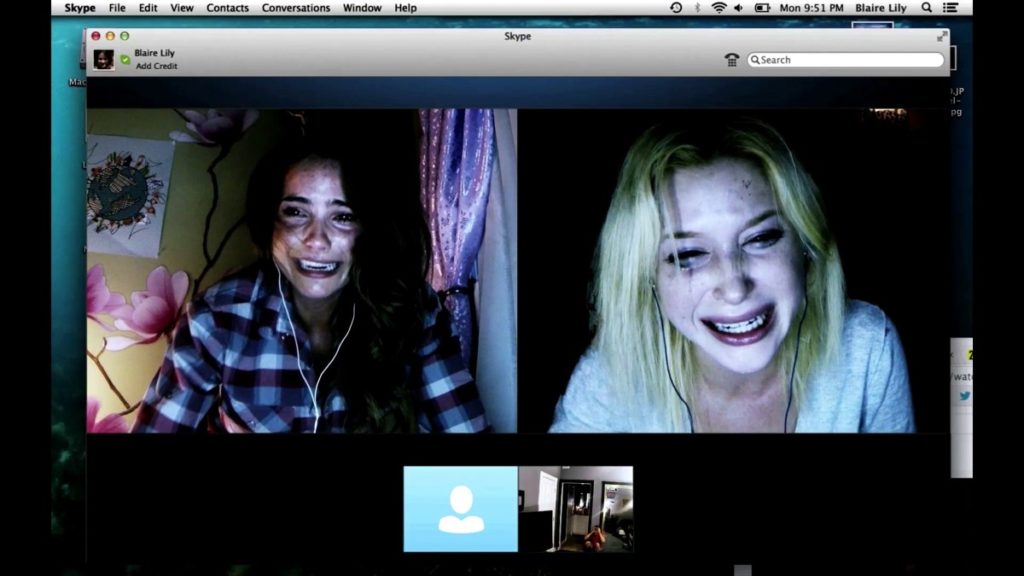 In Unfriended (2014), this physicality is completely flipped. I view this as the posthuman subversion of the horror survival game genre. All of the deaths and punishments which the vengeful ghost Laura enacts on her former friends are displayed through a computer screen. In fact, because of the extremely subjective camera, I argue that it’s difficult to ascertain whether or not these deaths even occur in the material world. Because Laura controls the internet and phone lines, it’s impossible to tell whether she has actually killed all of Blaire’s friends or not. The only physical (potential) death the audience sees is in the very last seconds when Blaire finally moves her vision away from her computer screen and manages to see the ghost of Laura leaping towards her before the film cuts to the credits. All of this to say that Unfriended focuses on the representation of contemporary life interest as it exists in a digital realm and does not provide any sort of the return to materiality that Saw provides. The teenagers are forced into playing a (possibly) deadly version of “Never Have I Ever.” What is especially helpful about looking at this representation of contemporary life interest is that most of the deaths are tied to simultaneous destruction of digital reputation. For example, before killing Val, Laura hacks into the friends’ Facebook accounts and posts embarrassing photos of Val drunk at a party. Once Laura turns her focus to Blaire, she sends video and photographic evidence of Blaire cheating on her boyfriend Mitch with a mutual friend, Adam. Although the men are also killed, they never experience this destruction of reputation, only Laura’s female victims are first humiliated prior to their deaths. Once again, we see a lesson in appreciating the value of life- through tears, Blaire apologizes to Mitch and tells him how much she loves him. At one point near the very end, an alarm goes off on Blaire’s computer. She jumps, then laughs at how scared she was over a computer alarm. Mitch asks what that sound was, and she sarcastically tells him that they have a quiz tomorrow and that the alarm was there to remind her to study. Suddenly, the work and labor that we are trained to treat as all-important becomes meaningless in the face of death and the loss of life. So, Unfriended also does help the characters (and, by extension, the audience) to temporarily return to the basics: life, love, friendship. 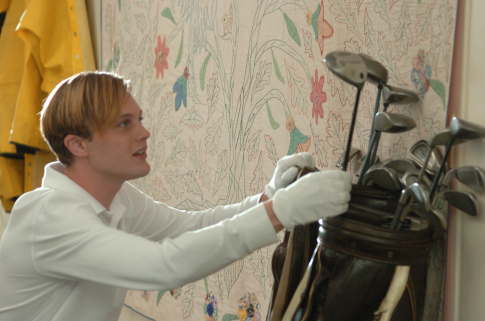 Funny Games (2007) also features a game (or really, a set of games) that jolts the characters out of their comfortable everyday existence and cares in order to return to a desperate defense of the basics. In this case, life and family. Part of the terror that is initially felt by the Farber family is the discovery that the two young men who refuse to leave their house don’t want their golf clubs, nor their money, they just want to play a sadistic game for the fun of it. The two men, in fact, seem bored at times, often going on tangents or having side debates regarding trivial things (i.e.: not gaining weight, whether or not Ann has “jelly rolls,” etc.). As I note in my Funny Games post,  I believe that part of the uncomfortable nature of this film stems from the fact that the audience is forced to align itself with the killers. We see almost everything from their perspective and Paul repeatedly speaks directly to the audience and can control the movie itself (for example, he has the power to rewind the film and re-do it, he also directs Ann at one point). This film, therefore, mirrors a different side of the contemporary life interest. Here, we are made to take part in the destruction of a family alongside two bloodthirsty male yuppies. Other human lives don’t matter much to them, they just want something to entertain them. What doesn’t quite fit this reading is the wealth of the victims which these two men repeatedly choose. Perhaps its similar to the end of American Psycho, when Patrick Bateman’s “taste” becomes more cultured and he demands higher-priced goods, the bodies of his co-workers and wealthy acquaintances as opposed to homeless men and prostitutes. Much like the expensive golf balls that catch Peter and Paul’s eyes at the start of the film, this wealthy family is an alluring and luxurious consumable good for two high-class serial killers. Therefore, the audience takes part in a survival game, but is forced to see the meaninglessness of it, as well as its devastating consequences. Like Saw, we return to a more material system of the “basics” and escape the unseen value system of credit and digital identity. However, we can only do so in this film after we feel gross from our complicity with both the killers and the larger contemporary late-capitalist system.

Other films that feature games include Cabin in the Woods, The Purge: Anarchy, The Belko Experiment, and Creep. In Deliverance, the character Lewis views survival as a game. To Ed he states, “It’s up to you to play the game” after he is seriously injured and incapacitated by an arrow. The Shining features a hedge maze as well as a set of twins who want Danny to “play with us, for ever and ever…” The ghost in Poltergeist basically creates a game of hide and seek. Scream brilliantly represents the postmodernism of the 1990’s, while allowing its characters to be hyper-aware of the “rules” of the slasher genre. This lets the characters “play the game” of the horror film, which is a similar tactic of neoliberal subjects today “playing the game” of business, or life. You’re Next was marketed using posters that featured a maze. The film itself included a survivalist who must make it through a dinner party alive. Although not really a game, it takes on some game features. In The Ring, the “rules” of the tape are made very clear and those who are “cursed” with seeing the tape must operate within a psychically sealed environment in order to survive. Finally, in Cabin Fever, the friends camping in the woods make a bet to see who could go the longest without drinking water, only beer. It is those who were able to play the game best who survive the longest because the water is contaminated with a virus.

How can survival game films within the horror genre work to render the contemporary “subject of life interest” visible? by Caitlin Duffy is licensed under a Creative Commons Attribution-ShareAlike 4.0 International License.