George Lippard published The Quaker City or, the Monks of Monk Hall: A Romance of Philadelphia Life, Mystery, and Crime in 1845. It was the best-selling novel in America until Uncle Tom’s Cabin. When it first appeared in 1845, it sold 60,000 copies within its first year and at least 10,000 in its entire first year. Thanks to The Quaker City, Lippard enjoyed his status as one of the best-paid American writers of the 1840’s, earning between $3,000-$4,000 a year.

Lippard gained inspiration for the novel’s plot at least partly from the March 1843 New Jersey trial of Singleton Mercer, who was accuse of the murder of Mahlon Hutchinson Heberton aboard the Philadelphia-Camden ferry vessel Dido on February 10, 1843. Mercer claimed that he only killed Heberton because, five days prior to the shooting, Heberton had raped Mercer’s sixteen year-old sister in a brothel at gunpoint. Mercer therefore stated that he was operating without full control of his mind due to the fiery passions that controlled him following his discovery that Heberton had raped his sister. He entered a plea of insanity and was found not guilty after less than an hour of jury deliberation.

In the Preface for the 1849 edition, Lippard claims his inspiration grew at least partly following the death of his friend who was “one of those old-fashioned lawyers” and who left Lippard a collection of his records of his experience as a private lawyer for thirty years. According to Lippard’s friend, “they contain a full and terrible development of the Secret Life of Philadelphia.” He also cites that he was the only protector of his orphan sister and he feared the possibility of her seduction and ruin by a rich man: “I know too well that law of society which makes a virtue of the dishonor of a poor girl, while it justly holds the seduction of a rich man’s child as an infamous crime.” I’m fascinated with Lippard’s view of the problem of seduction through the lens of class. He goes on to say that the seduction of a poor girl by a rich man is a worse crime than murder because it is “the assassination of the soul.” 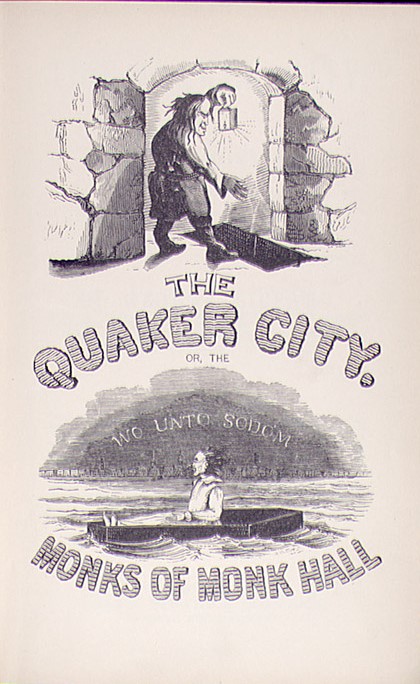 There are perhaps too many subplots to type out an extensive plot summary here as I normally do, so I will instead provide an extremely basic one.

The Quaker City follows numerous characters within Philadelphia as they experience sin, some through the commission of sin, others as the victim of the sinner.  The sinners are all rich men (and one married woman) who appear handsome and moral to all who know them in Philadelphia society, but who commit awful deeds at night in the darkened rooms of Monk Hall, an infamous manor with many underground floors and trapdoors, managed by Devil-Bug. The Monk Hall serves as a private gentleman’s club, but is secretly a brothel and opium den, as well. The men who commit these awful deeds and who belong to Monk Hall are some of the most respected citizens in Philadelphia. For example, Reverend Pyne is a well-beloved and followed reverend in Philadelphia who preaches for upright morals and the abandonment of the Pope. However, in Monk Hall, he purposefully drugs a young orphan woman named Mabel and makes her believe that he is her father. Once she is fully vulnerable from the influence of the drugs, he plans to rape her, however, Gold-Bug interferes because he believes that Mabel is the daughter of the only women he ever loved.

Lorrimer is a rich and handsome young man who plans at the start of the novel to fake a marriage with Mary, an innocent young woman and daughter of a local merchant. He seduces her, claiming that he loves her and wants to marry her, but that neither side of the family would allow it. He instructs her to tell nobody about the wedding until after the ceremony. In reality, he stages the entire wedding at Monk Hall, enlisting the various gentlemen members of the club and the club’s sinful domestics to play the role of different members of the wedding and wedding party. After the fake wedding, he planned to rape Mary and then reveal to her that the wedding was a fraud. Instead, Mary’s brother Byrnewood, who happened to be a member of Monk Hall, recognizes her during the wedding and forces it to stop after she faints. Lorrimer tells Mary that they will hold the wedding the next day after she has rested, but can no longer wait and has sex with Mary. Byrnewood discovers the “ruined” state of his sister and vows vengeance on Lorrimer. Devil-Bug and Lorrimer devise a plot to get rid of Byrnewood, poisoning him with large amounts of opium, locking him in a room that is on fire, causing him to fall through a trapdoor onto the hard ground, and they even try to bury him alive. All fail, and he escapes Monk Hall, but Mary dies. Throughout the rest of the novel, Byrnewood seeks to gain his vengeance against Lorrimer. 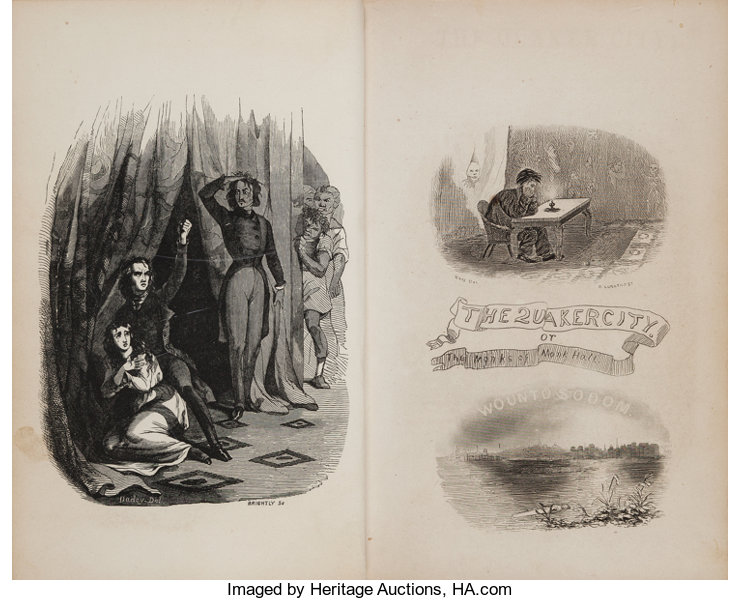 The Quaker City or, The Monks of Monk Hall (1845) by Caitlin Duffy is licensed under a Creative Commons Attribution-ShareAlike 4.0 International License.