In 1821, William Cullen Bryant published a volume of poetry title Poems that helped to establish his status as an American poet. It brought him international recognition, however, although he continued to write and publish poetry throughout his life, he never again received the same acclaim that he did after publishing his Poems in 1821. Still, he had many admirers, including Walt Whitman who described Bryant as “a poet who, to our mind, stands among the first in the world,” and Edgar Allan Poe who believed that Bryant had been wrongfully “overlooked by modern schools” despite the fact that Bryant “has genius, and that of marked character.” One possible reason for this could be that, unlike Emerson, Poe, and Whitman, Bryant never really marketed himself. He never published a treatise of poetry that celebrated his own brand of craft as the ideal. Additionally, he viewed his work as a newspaper editor and political writer as his greater calling. He worked as the editor-in-chief and part owner of the New York Evening Post. He was able to use this position to further his Jacksonian Democratic ideals and constantly advocated for policies favoring free-soiler, antislavery, free trade, prison reform, and labor reform beliefs. In the mid-1850’s, he helped to form the Republican Party due to his strongly held antislavery beliefs. Finally, he was a major figure in New York City due to his status as an editor and political figure, as well as his commitment to community service. 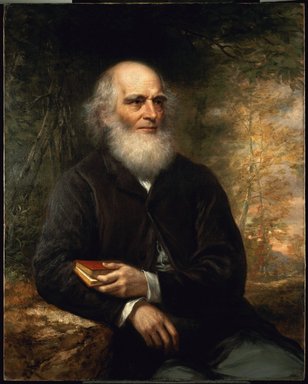 To him who in the love of Nature holds
Communion with her visible forms, she speaks
A various language; for his gayer hours
She has a voice of gladness, and a smile
And eloquence of beauty, and she glides
Into his darker musings, with a mild
And healing sympathy, that steals away
Their sharpness, ere he is aware. When thoughts
Of the last bitter hour come like a blight
Over thy spirit, and sad images
Of the stern agony, and shroud, and pall,
And breathless darkness, and the narrow house,
Make thee to shudder, and grow sick at heart;—
Go forth, under the open sky, and list
To Nature’s teachings, while from all around—
Earth and her waters, and the depths of air—
Comes a still voice—
Yet a few days, and thee
The all-beholding sun shall see no more
In all his course; nor yet in the cold ground,
Where thy pale form was laid, with many tears,
Nor in the embrace of ocean, shall exist
Thy image. Earth, that nourished thee, shall claim
Thy growth, to be resolved to earth again,
And, lost each human trace, surrendering up
Thine individual being, shalt thou go
To mix for ever with the elements,
To be a brother to the insensible rock
And to the sluggish clod, which the rude swain
Turns with his share, and treads upon. The oak
Shall send his roots abroad, and pierce thy mould.
Yet not to thine eternal resting-place
Shalt thou retire alone, nor couldst thou wish
Couch more magnificent. Thou shalt lie down
With patriarchs of the infant world—with kings,
The powerful of the earth—the wise, the good,
Fair forms, and hoary seers of ages past,
All in one mighty sepulchre.   The hills
Rock-ribbed and ancient as the sun,—the vales
Stretching in pensive quietness between;
The venerable woods—rivers that move
In majesty, and the complaining brooks
That make the meadows green; and, poured round all,
Old Ocean’s gray and melancholy waste,—
Are but the solemn decorations all
Of the great tomb of man. The golden sun,
The planets, all the infinite host of heaven,
Are shining on the sad abodes of death,
Through the still lapse of ages. All that tread
The globe are but a handful to the tribes
That slumber in its bosom.—Take the wings
Of morning, pierce the Barcan wilderness,
Or lose thyself in the continuous woods
Where rolls the Oregon, and hears no sound,
Save his own dashings—yet the dead are there:
And millions in those solitudes, since first
The flight of years began, have laid them down
In their last sleep—the dead reign there alone.
So shalt thou rest, and what if thou withdraw
In silence from the living, and no friend
Take note of thy departure? All that breathe
Will share thy destiny. The gay will laugh
When thou art gone, the solemn brood of care
Plod on, and each one as before will chase
His favorite phantom; yet all these shall leave
Their mirth and their employments, and shall come
And make their bed with thee. As the long train
Of ages glide away, the sons of men,
The youth in life’s green spring, and he who goes
In the full strength of years, matron and maid,
The speechless babe, and the gray-headed man—
Shall one by one be gathered to thy side,
By those, who in their turn shall follow them.
So live, that when thy summons comes to join
The innumerable caravan, which moves
To that mysterious realm, where each shall take
His chamber in the silent halls of death,
Thou go not, like the quarry-slave at night,
Scourged to his dungeon, but, sustained and soothed
By an unfaltering trust, approach thy grave,
Like one who wraps the drapery of his couch
About him, and lies down to pleasant dreams.
The title of “Thanatopsis” comes from the Greek words for death (‘thanatos’) and view or sight (‘opsis’). Therefore, the title may be translated to “viewing death” or “considering death.”
The flow and language of the poem is extremely soothing and calm. There are no jarring sounds, words, or phrases. Similarly, Bryant moves us from a vision of death in which we are placed in the grave, or “the narrow house” (line 12) to a final realization that the entire world is “the great tomb of man” (line 45). This is very reminiscent of Freneau’s “The Indian Burial Ground,” however in this conception of death, it is not just the American Indian, but the entire human race that inhabits nature after death. This also adds to a vision of the American landscape that helps to provide America with a greater historical foundation. If, after death, humans “mix forever with the elements,/ To be a brother to th’insensible rock/ And to the sluggish clod, which the rude swain/ Turns with his share, and treads upon…,” then America’s forefathers are part of the land. This provides the nation’s citizens with an imagined right to the land, as well as a better conception of a national history and culture. This poem also reminds me of Irving’s “Sleepy Hollow” because of the past’s persistence in Sleepy Hollow, as well as its deep tie to the atmosphere and nature of the small town. Similarly, in this poem, the past cannot be removed from the land because the bodies of human ancestors are mixed amongst the elements.