Stevenson wrote “The Body Snatcher” for the 1884 Christmas ghost story market. This story, which predates his writing of The Strange Case of Dr. Jekyll and Mr. Hyde by a year, is helpful to consider in conjunction with that better known work because of the clear connections that exist between the two. Additionally, “The Body Snatcher” more closely follows the traditional ghost-story format, in that it is told through the narrative frame of a group of people listening to a story by the fireside. Additionally, although it does not contain a ghost in the traditional sense, the story does feature the haunting of Wolfe Macfarlene by his sinful past through the ragged presence of Fettes, his former peer. 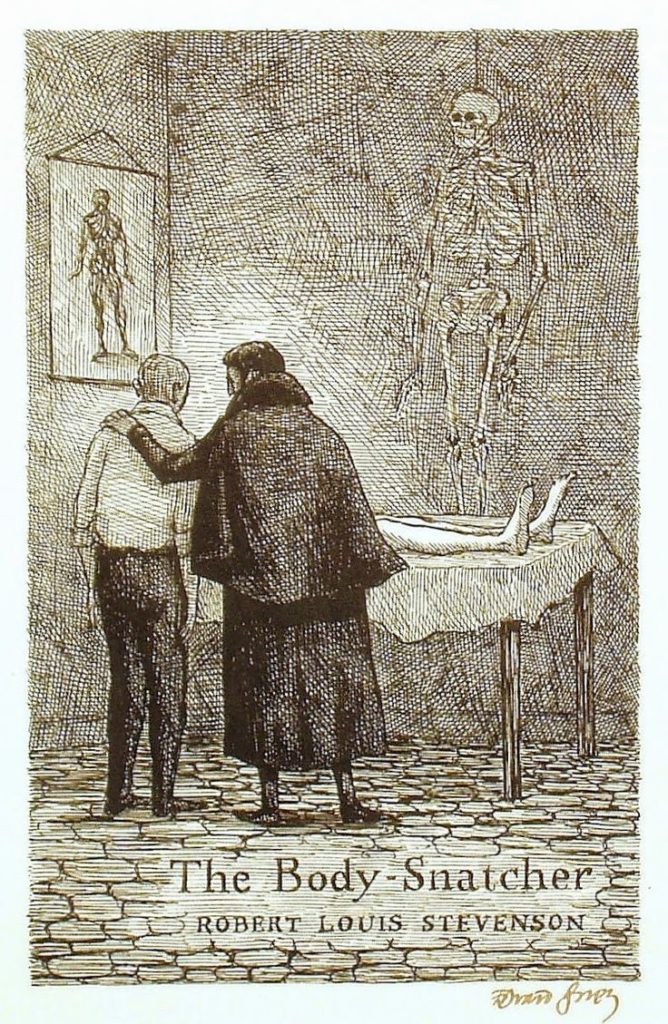 Edward Gorey’s illustration of “The Body-Snatcher”

“A group of friends share a few drinks, when an eminent doctor, Wolfe Macfarlane, enters. One of the friends, Fettes, recognizes the name and angrily confronts the new arrival. Although his friends all find this behaviour suspicious, none of them can understand what might lie behind it. It turns out that Macfarlane and Fettes had attended medical school together, under anatomy professor Robert Knox. Their duties included taking receipt of bodies for dissection, and paying the pair of shifty and suspicious men who supplied them.

On one occasion, Fettes identifies a body as that of a woman he knew, and is convinced she has been murdered. But Macfarlane talks him out of reporting the incident, lest they are both implicated in the crime.

Later, Fettes meets Macfarlane at a tavern, along with a man named Gray, who treats Macfarlane in a rude manner. The following night, Macfarlane brings Gray’s body along as a dissection sample. Although Fettes is now certain that his friend has committed murder, Macfarlane again convinces him to keep his silence, persuading him that if he is not courageous enough to perform such manly deeds as these, he will end up as just another victim. The two men make sure the body is comprehensively dissected, destroying any forensic evidence.

Fettes and Macfarlane continue their work, without being implicated in any crime. However, when a shortage of bodies leaves their mentor in need, they are sent to a country churchyard to exhume a recently buried woman. As they are driving back with the body seated between them, they begin to feel nervous and stop to take a better look. They are shocked to discover that the body between them is that of Gray, which they thought they had destroyed.” 1

“The Body Snatcher” (1884) by Caitlin Duffy is licensed under a Creative Commons Attribution-ShareAlike 4.0 International License.