The Phantom Rickshaw and Other Stories (1888)

Rudyard Kipling published The Phantom Rickshaw and Other Stories in 1888. It is a collection of short stories, all of which fit into the generic categories of weird fiction and/or ghost stories. In the collection’s Preface, however, Kipling warns readers that “this is not exactly a book of downright ghost stories as the cover makes believe. It is rather a collection of facts that never quite explained themselves.”

Kipling was born in India in 1865 to two British parents, his father being the principal of the new art school in Bombay. At age six, he and his sister were sent back to England to attend boarding school (a fairly typical custom of the time). While at school, he was prepared for a career in the army, and in 1882, his father secured a position for Rudyard on the Lahore Civil and Military Gazette.

For this text, I’ve selected four of the short stories to focus on: “The Phantom Rickshaw,” “The Strange Ride of Morrowbie Jukes,” “The Recrudescence of Imray,” and “My Own True Ghost Story.” 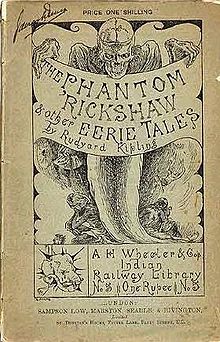 After an affair with a Mrs. Agnes Keith-Wessington in Simla, the narrator, Jack, repudiates her and eventually becomes engaged to Miss Kitty Mannering. Yet Mrs. Wessington continually reappears in Jack’s life, begging him to reconsider, insisting that it was all just a mistake. But Jack wants nothing to do with her and continues to spurn her. Eventually Mrs. Wessington dies, much to Jack’s relief. However, some time thereafter he sees her old rickshaw and assumes that someone has bought it. Then, to his astonishment, the rickshaw and the men pulling it pass through a horse, revealing themselves to be phantoms, bearing the departed ghost of Mrs. Wessington. This leads Jack into increasingly erratic behavior which he tries to cover up by concocting increasingly elaborate lies to assuage Kitty’s suspicions. Eventually a Dr. Heatherlegh takes him in, supposing the visions to be the result of disease or madness. Despite their efforts, Kitty and her family become increasingly suspicious and eventually call off the engagement. Jack loses hope and begins wandering the city aimlessly, accompanied by the ghost of Mrs. Wessington. 1

“The Strange Ride of Morrowbie Jukes”

One evening Morrowbie Jukes, an Englishman, is feeling a bit feverish and the barking of the dogs outside his tent is upsetting him. So he mounts his horse in order to pursue them. The horse bolts and they eventually fall into a sandy ravine on the edge of a river. He awakens the next morning to find himself in a village of the living dead, where people who appear to have died of, for instance, cholera, but who revived when their bodies were about to be burned, are imprisoned. He quickly learns that it is impossible to climb out because of the sandy slope. And the river is doubly treacherous with quicksand and a rifleman who will try to pick them off. He recognizes one man there, a Brahmin named Gunga Dass. Gunga has become ruthless, but he does feed Jukes with dead crow. Eventually Jukes discovered that another Englishman had been there and died. On his corpse Jukes finds a note explaining how to safely get through the quicksand. After Jukes explains it to Gunga, Gunga confesses to murdering the Englishman for fear of being left behind. They plan their escape for that evening, when the rifleman will be unable to see them in the dark. When the time to escape arrives, Gunga knocks Jukes unconscious and escapes alone. When Jukes awakes he is found by the boy who kept his dogs and is helped to escape by means of a rope. 2

“The Recrudescence of Imray”

“My Own True Ghost Story.”

The narrator, while staying at a dâk-bungalow in Katmal, India, hears someone in the next room playing billiards. He assumes that it is a group of doolie-bearers who’ve just arrived. The next morning he complains, only to learn that there were no coolies in the dâk-bungalow the night before. The owner then tells him that ten years ago it was a billiard-hall. An engineer who’d been fond of the billiard hall had died somewhere far from it and they suspected that it was his ghost that occasionally came to visit it. 4

The Phantom Rickshaw and Other Stories (1888) by Caitlin Duffy is licensed under a Creative Commons Attribution-ShareAlike 4.0 International License.