Ugly Feelings explores a selection of negative feelings as represented in literature and film. These feelings include: envy, anxiety, paranoia, irritation, “animatedness,” and “stuplimity” (though, for this list, I’ve chosen to focus only on paranoia, animatedness, and stuplimity). Ugly feelings are less pronounced and less powerful than the “higher” passions like anger or fear. They are not always articulated clearly, and are often characterized by ambiguity, ambivalence, and a lack of agency (2-3). They are non-cathartic and typically signify entanglement or stasis (3-4). They also sometimes occur as somewhat ironic meta-feelings, or feelings about feelings (i.e.: I feel shame about my feeling envious) (10).

Ngai explores these ugly feelings because for her, they are political: They are “unusually knotted or condensed interpretations” of material, social, and ideological predicaments, and argues that they can be diagnostic of the problems of our current cultural moment (3). Their ambiguity might actually be more productive for examining the complicated material and emotional landscape of a late-capitalist system that works to pervade and exploit every possible aspect and expression of an individual (4). 1 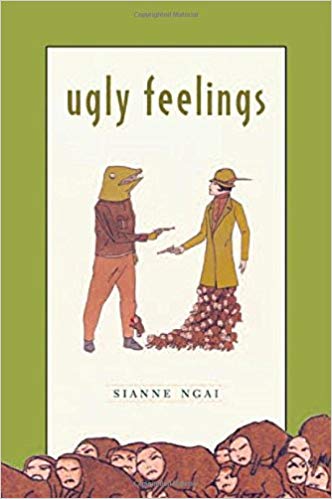