In her introduction to the third Norton critical edition of Uncle Tom’s Cabin, Elizabeth Ammons describes how the novel first came into being: Harriet Beecher Stowe, born in Connecticut to a family comprised of well-known public figures and ministers, felt a compulsory need to write Uncle Tom’s Cabin, feeling that “not she but God wrote the book” (vii). In the early 1850’s, it was difficult to discern whether or not slavery would ever be abolished in America and when the Fugitive Slave Act was passed in 1850, Northerners were required to turn in fugitive slaves, thereby forcing all Americans to participate in and uphold the institution of slavery, many abolitionists like Harriet Beecher Stowe felt compelled to do something. As a woman, she couldn’t vote, but she could write.

According to Ammons, two major events in Stowe’s life helped to craft Uncle Tom’s Cabin: the first came from the eighteen years she lived with her family in Cincinnati, Ohio, just a “river’s width away from the slave-holding state of Kentucky” (viii). This gave her a greater understanding of slavery, as well as a deeper emotional response to the injustices inherent to the institution. The second event was the death of her infant son, Charley. His death deeply grieved her and, according to Stowe, allowed her to better emphasize with the women who were forced to depart from their children as a result of slavery: “I remember many a night weeping over you as you lay sleeping beside me… and I thought of the slave mothers whose babies were torn from them… It was at his dying bed and at his grave that I learned what a poor slave mother may feel when her child is torn away from her” (qtd. in Ammons viii).

Once published in book form in 1852 (it was first serialized in the small antislavery newspaper titled The National Era in 1850), Uncle Tom’s Cabin became immediately popular, keeping printing presses “running day and night,” outselling every book except the Bible, and requiring multiple translated editions (ix). Famously, Stowe was greeted by President Abraham Lincoln at the White House. According to national legend, he asked “So you are the little woman who started the great war” (qtd. in Ammons ix). Ever since it was published, it was a controversial text. White southerners immediately hated their representation, as well as the depiction of slavery. Some abolitionists also hated the text for its treatment of race and its support for African Americans to emigrate to Liberia (ibid). Controversy has continued to surround the book. While many contemporary readers laud its role as activist literature, others argue against the racism within Uncle Tom’s Cabin, causing “Uncle Tom” to eventually become an insult. 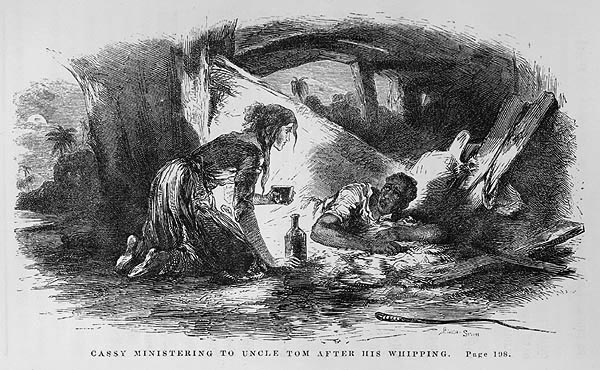 Eliza escapes with her son; Tom sold “down the river”

The book opens with a Kentucky farmer named Arthur Shelby facing the loss of his farm because of debts. Even though he and his wife Emily Shelby believe that they have a benevolent relationship with their slaves, Shelby decides to raise the needed funds by selling two of them—Uncle Tom, a middle-aged man with a wife and children, and Harry, the son of Emily Shelby’s maid Eliza—to a slave trader. Emily Shelby is averse to this idea because she had promised her maid that her child would never be sold; Emily’s son, George Shelby, hates to see Tom go because he sees the man as his friend and mentor.

When Eliza overhears Mr. and Mrs. Shelby discussing plans to sell Tom and Harry, Eliza determines to run away with her son. The novel states that Eliza made this decision because she fears losing her only surviving child (she had already miscarried two children). Eliza departs that night, leaving a note of apology to her mistress.

Tom is sold and placed on a riverboat which sets sail down the Mississippi River. While on board, Tom meets and befriends a young white girl named Eva. Eva’s father Augustine St. Clare buys Tom from the slave trader and takes him with the family to their home in New Orleans. Tom and Eva begin to relate to one another because of the deep Christian faith they both share.

During Eliza’s escape, she meets up with her husband George Harris, who had run away previously. They decide to attempt to reach Canada. However, they are tracked by a slave hunter named Tom Loker. Eventually Loker and his men trap Eliza and her family, causing George to shoot him in the side. Worried that Loker may die, Eliza convinces George to bring the slave hunter to a nearby Quaker settlement for medical treatment.

Back in New Orleans, St. Clare debates slavery with his Northern cousin Ophelia who, while opposing slavery, is prejudiced against black people. St. Clare, however, believes he is not biased, even though he is a slave owner. In an attempt to show Ophelia that her views on blacks are wrong, St. Clare purchases Topsy, a young black slave, and asks Ophelia to educate her.

After Tom has lived with the St. Clares for two years, Eva grows very ill. Before she dies she experiences a vision of heaven, which she shares with the people around her. As a result of her death and vision, the other characters resolve to change their lives, with Ophelia promising to throw off her personal prejudices against blacks, Topsy saying she will better herself, and St. Clare pledging to free Tom.

Before St. Clare can follow through on his pledge, however, he dies after being stabbed outside of a tavern. His wife reneges on her late husband’s vow and sells Tom at auction to a vicious plantation owner named Simon Legree. Legree (a transplanted northerner) takes Tom and Emmeline (whom Legree purchased at the same time) to rural Louisiana, where they meet Legree’s other slaves.

Legree begins to hate Tom when Tom refuses Legree’s order to whip his fellow slave. Legree beats Tom viciously and resolves to crush his new slave’s faith in God. Despite Legree’s cruelty, however, Tom refuses to stop reading his Bible and comforting the other slaves as best he can. While at the plantation, Tom meets Cassy, another of Legree’s slaves. Cassy was previously separated from her son and daughter when they were sold; unable to endure the pain of seeing another child sold, she killed her third child.

At this point Tom Loker returns to the story. Loker has changed as the result of being healed by the Quakers. George, Eliza, and Harry have also obtained their freedom after crossing into Canada. In Louisiana, Uncle Tom almost succumbs to hopelessness as his faith in God is tested by the hardships of the plantation. However, he has two visions, one of Jesus and one of Eva, which renew his resolve to remain a faithful Christian, even unto death. He encourages Cassy to escape, which she does, taking Emmeline with her. When Tom refuses to tell Legree where Cassy and Emmeline have gone, Legree orders his overseers to kill Tom. As Tom is dying, he forgives the overseers who savagely beat him. Humbled by the character of the man they have killed, both men become Christians. Very shortly before Tom’s death, George Shelby (Arthur Shelby’s son) arrives to buy Tom’s freedom but finds he is too late.

On their boat ride to freedom, Cassy and Emmeline meet George Harris’ sister and accompany her to Canada. Cassy discovers that Eliza is her long-lost daughter who was sold as a child. Now that their family is together again, they travel to France and eventually Liberia, the African nation created for former American slaves. George Shelby returns to the Kentucky farm and frees all his slaves. George tells them to remember Tom’s sacrifice and his belief in the true meaning of Christianity. 1