In Undoing the Demos, Wendy Brown argues that neoliberalism is destroying democracy through its undermining of the value of human life.

I join Michel Foucault and others in conceiving neoliberalism as an order of normative reason that, when it becomes ascendant, takes shape as a governing rationality extending a specific formulation economic values, practices, and metrics to every dimension of human life. (30)

To speak of the relentless and ubiquitous economization of all features of life by neoliberalism is thus not to claim that neoliberalism literally marketize all spheres, even as such marketization is certainly one important effect of neoliberalism. Rather, the point is that neoliberal rationality disseminates the model of the market to all domains and activities- even where money is not at issue- and configures human beings exhaustively as market actors, always, only, and everywhere as homo economicus. (31)

To argue that homo economicus has entirely vanquished the homo politicus, Brown largely pulls from classical thinkers on liberalism, including Aristotle, Plato, and John Stuart Mill. Our care for and understanding of democratic values has been exchanged for market rationality. Even classifications like class have disappeared (38) in favor of individualized liberty and a raw economic rationality that valorizes “economic growth, competitive positioning, and capital enhancement” (26). 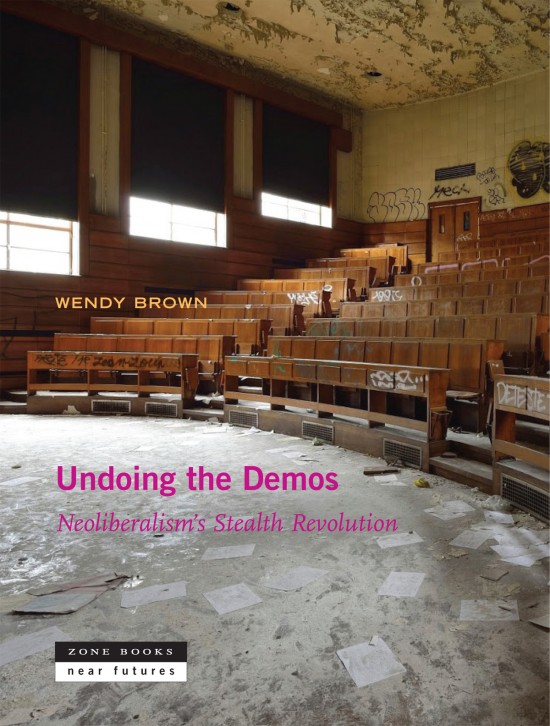 Undoing the Demos (2015) by Caitlin Duffy is licensed under a Creative Commons Attribution-ShareAlike 4.0 International License.