Kelroy was published by Rebecca Rush in 1812. Most likely because of its appearance immediately before the War of 1812, the novel unfortunately did not receive a lot of attention. Rebecca Rush’s uncle was the famous physician Benjamin Rush.

According to the introduction written by Betsy Klimasmith in the Broadview edition, many readers today often compare this novel to those of Jane Austen due to their similar focus on marriage and money (9). Klimasmith highlights the “Gothic edge” present in Rush’s work, which she states comes mainly from the character of Mrs. Hammond, whose anger and rage is just barely concealed throughout the narrative: “Rush’s brilliant characterization of an ambitious woman whose own survival depends on manipulating her daughters’ marriage plans enables Kelroy to transcend generic expectations” (ibid.). It is Mrs. Hammond’s deliberate and constant scheming that pushes her beyond female assistants to seduction like Madame La Rue in Susanna Rowson’s Charlotte Temple. She is systematic, scheming, and ambitious, which, according to Klimasmith, also pushed previous conceptions of what female characters could be (ibid).

I am particularly interested in Klimasmith’s reading of Kelroy as having a “divided plot” (14). Instead of following the traditional and simple plot of the seduction narrative, Rush’s novel deviates drastically mainly because of the fact that “instead of seduction, money structures Kelroy’s plot” (ibid). Although the novel ends in the young heroine’s swoon and subsequent death typical of the seduction narrative, it is Emily’s mother, rather than a libertine or rake, that is her worst enemy and creator of her ruin (15). The first half of the novel seduces the reader into at least partly sympathizing with Mrs. Hammond due to her ability to perform the role of “beneficent mother familiar to readers of seduction tales” and her quest to help her daughters secure a good marriage (ibid). 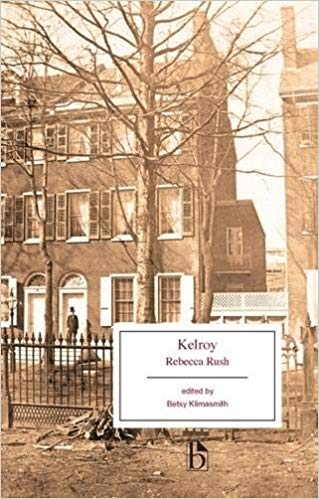 After the death of her husband, Mrs. Hammond realizes that she is deeply in debt. She is used to living richly, however, and therefore focuses on her two beautiful daughters as her best hope of financial security. If she can marry them to rich husbands, both she and her daughters will escape poverty.

To accomplish this plan, she pays off all her debts and all the property she can under the guise of grief, and moves to the country to save her money. No one must know the extent of her poverty, or the girls will never find a good match. There she waits until her children are old enough to marry, and spends the time making them into cultured young ladies: Lucy and Emily Hammond. The girls are not far apart in years, but there are differences between them. While Lucy absorbs the ideas about marriage that her mother imparts (all economically minded), Emily has a romantic personality that resists such materials concerns.

When the two girls return to Philadelphia, Pennsylvania at 17 (Emily) and 18 (Lucy), their beauty is a huge success, and they have many admirers. A wealthy and noble Englishman, Mr. Walsingham, finally “bites” and marries Lucy. Emily is not as easily married off, especially after she sees the very moody poet Kelroy.

Kelroy comes from a good family, but like the Hammonds has lost his fortune because of his father’s love of gambling. He is currently penniless, but plans a voyage to India, where he hopes to make his fortune. Emily and Kelroy are a perfect match for each other and quickly fall in love, despite all the attempts Mrs. Hammond makes to separate them. Other suitors, notably Mr. Marney, are very jealous of this obvious attachment. Kelroy has one advantage, however: he is a good friend of Mr. Walsingham, who endeavors to help Kelroy in respect to Mrs. Hammond.

Mr. Walsingham, who had been made to believe that Lucy has a fortune, now knows better and tells Mrs. Hammond that he will ask back for the money Mrs. Hammond has borrowed from him over the last months (900 dollars) if she does not agree to let Kelroy see Emily. Mrs. Hammond is in no position to return the money and reluctantly agrees. The two are engaged, but not married before Kelroy leaves for India.

After Lucy and Mr. Walsingham leave for England, Mrs. Hammond’s house burns down and she wins the lottery, which allows the pretext and the means to move to the country (to preserve the money she has left). Emily there meets a new rich suitor, Dunlevy. This man is perfectly nice, but Emily still loves Kelroy most and resists Dunlevy’s advances.

Only after she receives a letter from Kelroy in which he releases her from the engagement does Emily (deeply grieving) agree to marry Dunlevy. The marriage goes well for six months despite the death of Mrs. Hammond. But then Emily finds some letters her mother had hidden in a writing desk: one of the letters is an exact copy of the one she received from “Kelroy,” and seeing another written to Kelroy in her name, she realizes what her mother (in collusion with Marney) did. Unable to recover from this shock, she dies not long afterwards.

Kelroy of course received a similar letter and has tried to forget about Emily. After hearing that both Emily and Mrs. Hammond have died, he returns to the United States. There, Helen (Emily’s best friend) sends Kelroy the packet of letters to prove to him that Emily never quit loving him. The shock of this discovery so affects Kelroy that he borders on the edge of insanity. He decides to begin traveling again, and the ship he sails on sinks into the ocean three weeks after his departure. 1

Kelroy (1812) by Caitlin Duffy is licensed under a Creative Commons Attribution-ShareAlike 4.0 International License.